This is the list I have of a bunch of spirits gods/goddesses, demons and angels . This is not all that they do. I have taken certain things that I would need and made a list of it . Also I don’t have the sigils of all of these spirits so if you know it please drop it .Here it is .

Urgivoh - assists the magician,theoretically and practically, in gaining the favor of very important persons

Abbetira - shows the magician the way to acquire high esteem, power and wealth in the physical world. Apart form this, he can help him in getting into the favor of very important people

Lagiros - Directly by himself or indirectly by the influence of his subordinates this head helps the magician to gain the favour of very important people, to have petitions handed in to them approved, etc. This head can cause a very important person to take a benevolent attitude towards the magician;he can create favorable situations, and the like

Jezalel - By jezalel’s help the magician can procure for himself the favour of very important persons, secure for himself success in love matters, learn about the secret plans of his enemies, and many other things.

Mebahel - he inspires politicians and helps them to carry out their plans.

Haaiah - The magician also is informed how to gain the favour of very important people,how to gain knowledge and riches

Asaliah - he is able to stimulate the favour of important people.

Nithael - he helps them to become famous. He makes the magician a favorite with very important people on earth

BRULEFER - He makes one beloved.

MUSISIN - has power over great lords, teaches all that happens in the Republics, and the affairs of the Allies.

PENTAGNONY - who gives the love of great lords.

Draggo - He is a demon of war. He will help someone in a fight or in a battle.

FRIMOST - has power over women and girls, and will help you to obtain their use.

Amnediel - is known for his ability to imprison captives and repel mice.

HAEL - He instructs in the writing of all kinds of letters; speaking. He gives the immediate power to speak in other languages and explains the most secret things.

Sirchade - is one of the eighteen Servitors of Syrach. He has powers over animals.

BRULEFER, who causes a person to be beloved of women.

Sustugriel teaches the art of magic. He gives familiar spirits that can be used for all purposes, and he also gives mandragores.

OEILLET - He has power over money and wealth.

ROSIER - He incites love between the sexes and brings about romance.

OLIVIER - He has power over wealth and money.

Gremory - the Love of Women both Young and Old

Aciel - He moves and acts as quick as human thought. Able to give riches to his summoner, Aciel will instantly bring forth items from a great distance. He has the power to affect the economy as well as the ability to cause earthquakes.

Spaller - He is a demon of all arts and languages.

Razel - Her power is to make love between men and women and to break up relationships.

Sergutthy has power over maidens and wives, when things are favourable.

LUCIFUGE ROFOCALE - He has control over all of the wealth and treasures of the world.

Satanachia - is described in the Grand Grimoire as a commander-in-chief of Satan’s army, who controls either forty-five or fifty-four legions of demons, including Pruflas, Aamon, Barbatos, and Astaroth. According to the Grand Grimoire, he has the power to subjugate all women and girls, and to do with them whatever he wishes.

Aschmunadai - Since Aschmunadai is in possession of a great number of servants, he can place at the magician’s disposal, if asked by him, servants who will assist him in our physical world and do everything he wants.

Lurchi - can be most useful to the magician in all love matters. Lurchi helps the magician become rich by showing him means and ways to reach this end orby the direct help of his servants.

Aspadit - is a very fine intelligence and secures the magician’s luck in games, competitions, bets and so on.

Nasi - Nasi tells the magician how to increase his income, and helps the magician to improve his position in life either by himself or by his servants.He is regarded as a perfect master of the making of pleasure and earthly happiness.

Jromoni- he can inform the magician how to make money easily and quickly, providing Divine Providence approves of it - by wins, bets, speculations etc.

Paschy - This head can assist the magician in being a successful diplomat.

Cepacha - has a special affection for beauty, harmony and external splendour he will tell him ways and means by which he can make his body look good-looking and attractive.

Yraganon - If the magician wants to have esteem, success, honour and riches in business, this head can help him a great deal in this respect by putting at his disposal his subordinates.

Capipa - is known as the custodian of wealth, riches and reputation. If the magician wants to become rich quickly, without the riches becoming a hindrance to his spiritual development - which fact can best be found out by the head himself who in this case would tell the magician about it - he can be sure that Capipa will see that he acquires the desired riches.

Nephasser - Being a great messenger of fortune, this head, like many other intelligences of the zone girdling the earth, procure happiness, riches, material success and satisfaction for the magician.

Jeliel - how to gain respect, power and riches and, vice versa, how to make unworthy people lose their reputation and riches.

Aziel - he will have learnt how to become famous and rich.

Hakamiah - is the name of the sixteenth genius of the Mercury sphere, who, by applying occult means, will help the
magician to honor, renown, glory and riches. If the magician wishes it, Hakamiah can also make women love him and entrust him with the secret of treating successfully infertility of women

Jeiaiel - The twenty-second genius helps the magician to become respected and rich by magic and quabbalah and also lets him become famous, should he want it.

Kevakiah - If the magician wants it, Kevakiah will help him to become rich and honored

Zachriel - To attract coincidence and change that leads to growth To let new ideas lead you to a new life.

Vaviel - Creates an aura of fascination, charming others by genuine presence.

Tzuriel - To attract random moments of fortune in times of difficulty

Fama - (goddess of fame and rumor)

Eros - The god of love and attraction.

Clymene - Titaness of renown, fame, and infamy, and wife of Iapetus.

Yeah I mentioned above that I they can do more but I only took certain things that I needed .

I’m sure all of them can do much more .

@TheRookie, interesting list, i just want to ask, have you worked with all of the spirits on the list and i am particularly interest in Eros. How did you work with him and for how long and your experiences with him will be much appreciated if shared.

Okay, cool thanks for the reply!!!

Can you cite your sources please - I can see that this has been copied from elsewhere. If you haven’t worked with all of them please say which ones you have actually worked with and the outcome.

You can post links to other sites, just not to anything that has copyrighted material that has been illegally posted.

Well I mostly got them from Wikipedia . Koetting’s Kingdom of Flames and Konstantino’s summoning spirits

Is wikipedia an accurate source?

Is wikipedia an accurate source?

What other web based alternatives are there? Scholarpedia? Citizendium? Encyclopedia Britannica? The three examples are, for sure, more accurate than Wikipedia in many instances, but the flow of updates are fairly slow in comparison to Wikipedia.

When it comes to science and historical events, Wikipedia is still as good as it gets. Of course we have to read critically and check the bottom section of sources: 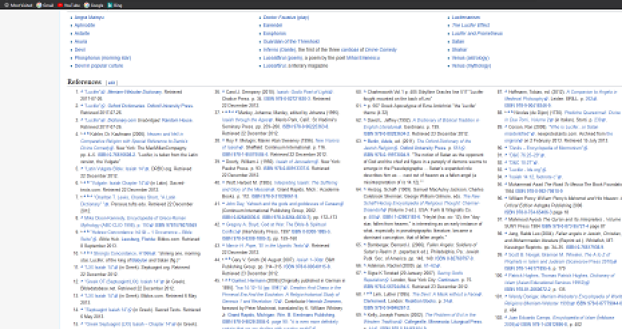 I would say it’s more accurate than the “anti-Wikipedia”-folks think, and in contrast to other sources and competitors, their updates are much faster.

There’s been studies on Wikipedias accuracy (2014), too, and even if this article was updated in 2016, it gives an estimation at least:

Wikipedia is a resource used by people everywhere, from middle school students to college students (and it's safe to say that researchers also use it from

While the criticism of Wikipedia is fair and square, no one gives any examples of other sources out there. Why? Maybe because they do most of their researches there anyway?

What is the source of the name Cepacha ??

Thanks. Is the capipa and jromoni name true name in bardons book or coded name?

So you evocation with sigil?

Yes. Gaze at the sigil. There’s a bunch of ways to do it but I use Binaural beats. @Lady_Eva has a link she sends to new people but I don’t feel like looking for it now.