I just want to say, prior to going into this, that I am quite a logical and grounded individual. So much so that I do not believe half of the stories I hear from people on here. But what I am about to disclose happened to me in a manner that (as far as I know) has not been manifested in any film or book to date.

After finishing work I decided to relax on my bed. 20 minutes later I black out (probably fell asleep). I awake and look at my watch to find that I was asleep (I think) for 30 minutes. 10 minutes later I black out again. This cycle continued for 6 hours - this fading in and out of consciousness - this inability to remain conscious for more than 10 minutes. Shortly before I regained the ability to remain conscious for a greater time than 10 minutes, I saw this for the briefest of time (3-4 seconds): 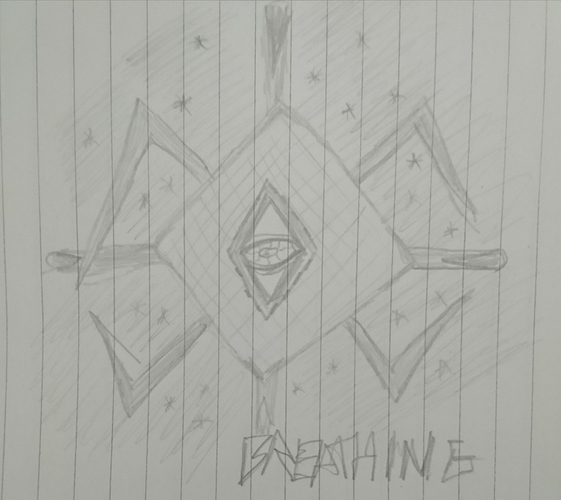 The above image was drawn by hand during the aforementioned state between conscious and unconscious.

I have no idea what this is. It has no name - what can only be described in causal language as 8 spider legs, a constantly warping white eye inside a tetrahedron, and it does not speak. It only breathes heavily.

The having of no name and its inability to speak is something I expected however. This THING is an acausal entity, so logically its being would not be able to manifest in causal totality. Instead taking the physical form of an abstraction my consciousness allows me to currently comprehend, and it would not manifest causally in the same way it did for me if someone else was to connect with it.

Shortly after this event - and after my regaining of consciousness - I had to make a journey to the supermarket. Upon leaving the apartment everything felt like an abstraction - a cosmic simulation of some form. I felt like I could just bump into passersby and they would disintegrate into nothingness. The same applies for the buildings, automotive vehicles and any other physical object.

I was almost at the store when I looked up and saw a large aninamted, tourmalated, quartz tetrahedron in the sky. I could not see it physically with my eyes but I could see it by subconsciously or unconsciously utilising something else.

For the entire duration of my short trip to the store I could feel the presence of THING hovering above me - emitting a creeping cold to let me know it was there. I have not banished it because I do not feel threatened by it. It is just there - hovering - watching.

I have no logical explanation for the creeping cold because it was exceptionally warm outside.

What I find so strange about this is that I did not conduct an invocation or evocation, yet it still latched onto me. This is part of why I believe it to be an authentic occurrence. There was no theatricality, no ritual, no working. It just came out of nothing.

Has anyone experienced this before, and if so what is your analysis?

I think it might be some sort of a higher spiritual level extraterrestrial life form, who was spying on you. Have you been doing any meditations with cosmos or any other planets and galaxies? Maybe it got your “signal” and made contact with you. Still, very cool.

I have also seen some strange entities who had heads simillar to a praying mantis or ants with big staring eyes.

who was spying on you.

The thing is it only appears when I “go out into the world”. It is not here at the moment.

Have you been doing any meditations with cosmos

Maybe it’s watching over you? Like an ascended master or something?

Who knows? It was a really strange experience though. I found it underwhelming, but at the same time I felt what I can only describe as “loss”, which was exhilarating. I could not stop grinning.

And when i said extraterrestrial, i meant it is different extraterrestrial life form from other dimension, as it is explained by Dr. Steven Greer (i think you know that guy). So you are completely right and very smart from what i can see in how you speak and explain things. Unfortunately i don’t have that broad of an english vocabulary to express myself corectly.

So I take a few issues with this.

“Programmed Life Forms” is an oxymoron within the current linguistic definitions (which is something a professor should understand when giving an academic talk). In order for something to be regarded as a “life-form” it needs to be organic (as a living organism not the explanation of the mechanics of a concept) - containing within it a biological and cellular structure that has not had any unnatural alteration or programming.

Crops are organic up until the point where Genetically Modified Organisms are infused. At which point it ceases to be - by linguistic definition - “organic”.

Dictionary definition of organic in this context:

“of, relating to, yielding, or involving the use of food produced with the use of feed or fertilizer of plant or animal origin without employment of chemically formulated fertilizers, growth stimulants, antibiotics, or pesticides.”

Plants are living, biological entities, just like humans and animals (by natural, mechanical comparison). They consume to survive and grow (just like us) via the process of photosynthesis and root intake of water. For this reason the above definition applies.

Using “extraterrestrial” and “life-form” within the same description of the subject does not work because if something is multidimensional (in this sense “extraterrestrial”) it is acausal, and thus does not have a biological/cellular structure - or any form of carbon-based existence because it exists outside of such physical proximities.

Thanks for the link though.

Wow, you really know your “stuff”. Now i feel like a complete dumbass compared to you. Thank you for correcting me though.

Now i feel like a complete dumbass compared to you.

It is not intelligence. It’s an understanding of how the ever-changing mechanics of language works. If you want to see through the theories of “professionals” and pseudo-intellectuals - most of whom do not actually understand how language works - then this understanding is vital. With a little effort you can learn it too. Don’t sell yourself short.

It is the Dragon, the Void, the raw energy of all.
You are awakening your third eye and realising that all is an illusion.
I would recommend reading Michael Kelly’s books regardless of whether you sympathise with the Draconian Tradition. It will give you more insight about the symbols, the presence that was hovering above you, and the rest of the feelings you have.

I bet you are feeling now detached and probably a bit unstable comparing to what you normally feel. I think it is a very BIG step.
Congratulations.

This looks very similar to a Thrasz to me, a symbol that was revealed to one of the founders of The Temple of THEM in a dream. You can find illustrations and more about this symbol in Liber Bathyal by Ryan Anschauung. The author recommended the use of this symbol to me in my work with presencing the acausal. 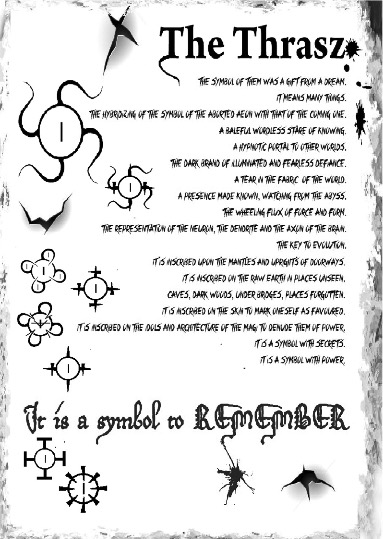