My Experience Working With Sastan

I am aware there are already more than a few threads that have been created concerning Sastan.
I have decided to create this thread because my own experiences may be different from others and I am interested in hearing from you all what you think about my experience so far.

I read through some other threads before doing my own evocation of Sastan.
I know a lot of people try doing scrying with Sastan like what Koetting does in the Mastering Evocation course but I felt the urge to do an evocation without scrying.

I evoked Sastan using his sigil and by calling upon his name and he manifested in the incense. I couldn’t see him though as I currently don’t have the ability to clearly see spirits.
Once he manifests I tell him I have evoked him because I need assistance with developing clairvoyance.

Then he tells me to do something I wasn’t expecting.
He tells me to put my hand into the smoke of the incense and leave it there for a while and then place it on my forehead over my minds eye/Ajna chakra.
He said I needed some of his essence in order for him to assist me.

For a second before I did this I hesitate, while I don’t at all follow the Right Hand Path, as you know practitioners of the RHP would strongly warn against doing such a thing or even working with Sastan in the first place.
I was thinking “Is that really necessary? What is going to happen once I do that?”

So I place my hand into the smoke of the incense and leave it there for a while.
And then I place my hand on my forehead.
I don’t feel any sensation or any activity going on out of the usual when doing evocation. I was expecting to feel something.

After this I thank Sastan for coming and tell him I really appreciate his assistance.

Straight after this evocation I start doing some Blue Ray Meditation.
So I am gazing into a Indigo Candle and like usual with BRM I feel something going on with my minds eye/Ajna chakra.
While I have had vision of spirits while doing meditation I haven’t ever seen anything clearly.

Then a spirit starts manifesting and starts becoming clear.
I thought it might be Sastan, who is meant to look like a snake according to what I have read on this forum.
I see a clear image of the spirit, I was expecting to see a Cobra or another snake.
This spirit looks similar to a snake but it isn’t a snake. So then I am thinking well is this Sastan or another spirit?

So then I do some Googling on Sastan and I found a page with this image: 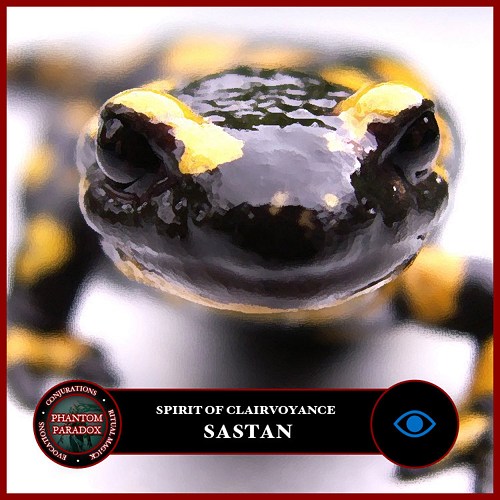 As soon as I see it, I say to myself - That is what I saw! Exactly!
But it wasn’t in full colour like the above image.

After reading some more posts I find that people say Sastan is meant to first appear as a Salamander.

I found the following on reddit, I would be interested in any comments anyone has regarding it:

Description: Sastan can appear as either a salamander or an old man with white hair. If he appears as a Salamander, you need to immediately tell him to change forms. The last thing you want is for him to get his flame on in your living room. Don't worry about it too much though. Basically, Sastan will help you quickly develop your clairaudience and clairvoyance; opening your astral senses. It's worth noting that if you really enjoy working with Sastan, you might pick up the grimoire "Kingdoms of Flame" as that's where he originates from.

I’m personally very excited for this week, and quite honestly I was saving Sastan until week three so that those of you that have never done anything like this before could get a little practice before calling up a spirit that can REALLY make some crazy shit happen in your life.

(And for those of you who are a tad bit more experienced, yes, this originated off of a square)

What’s up with Sastan asking me to put my hand into the smoke of the incense?

What’s up with Sastan asking me to put my hand into the smoke of the incense?

- it could have been to clear an energy blockage or some other subtle energy thing, either way the fact you later found accounts that were identical to your own support this being a genuine contact and with the correct spirit, so that’s cool!

I don’t have any personal experience with Sastan so that’s all I have to add for now.

In rituals,I have danced,I have contorted,I have convulsed,I’ve temporarily been a gymnast,I have rolled around in wet clothes,I have bled,I have burned myself,I have jumped around like an idiot,I have sang hymns from my head,I have punched pillows,I’ve eaten grass for crying out loud and I think I’ve posted about many of those things ON HERE!

Sastan telling you to put your hand into the incense smoke was by my standards completely normal.And there is a very strong link between your hands and your Ajna chakra.

The Ze’al chakra which lies at the back of your head,and the base of your skull connects your Sahasrara,Ajna,and Vishuddha,and also acts as a sort of energetic ‘‘battery’’,wherein it creates energy,and releases it through your arms.

Your arms,and your hands,are channels and vessels of the energy that starts in the Ze’al and ends in your ritual.That same energy is funneled in evocation while structuring.

Finally,about non-snakey manifestation,Sastan isn’t always meant to be a snake.To me he first appeared as a reptilian-like humanoid.After that,he appeared as a quadrupedal lizard-thing,and when I did the scrying exercises,then he appeared as a snake.

I wouldn’t worry too much about the materializations.Spirits materialize in weird ways for different weird people.If there is that amphibian and/or reptilian imagery(lizard men,frogs,salamanders,dragons,snakes,turtles probably) then it could be Sastan since these animals seem to be ‘‘sacred’’ to him.

Only way to get an answer to any of this is to ask Sastan.Also if you’re not sure whether a spirit is the real deal,just ask it to show you its sigil,and at the back of your eyelids the sigil should appear.