My experience with meditation and vision with different entities

So, I found out from Zadkiel what exactly we are going to work on. For now, our interaction will be based on working on my internal issues, as the resolution of which will facilitate work in the magical area. I specifically clarified whether we will work in the magical area in parallel with this, but he drew attention to the fact that so far the work will concern only my internal issues. So far, the duration of our work will last 30 days. Next - let’s see.

Separately, I would like to note that I have never felt such seriousness, solidity and concentration that I felt from the presence of Zadkiel. It feels like if this spirit takes up any business, then he will do it thoroughly and focused.

Today, the image of a glowing blue ball flashed through my mind all day. I mentioned it earlier and associate it with the mysterious “heart of water”.
I was trying to figure out why this ball appears in my thoughts. As far as I understand, research of this ball will help to understand Attakeria or some aspects of him.

In general, I need to understand this issue in more detail. Perhaps I will purposefully meditate on the image of this ball and see what comes of it.

If you have come across something similar in your practice, then I would be glad and grateful to hear about it.

Well, I tried to find out a little more about the “heart of water”. So, while meditating, I saw myself in a cave, at the other end of which a large blue ball, which I described earlier, sparkled. When I approached it, I felt the moisture and warmth that surrounded me. I also noticed either haze or jets of water that hovered around this ball. Then I decided to immerse my hands in this ball in order to “feel” it even more. When I did this, I saw pictures quickly replacing each other in the following sequence: waterfall, underwater space, mountain river, again underwater space. Then I felt a balance, as if opposites were connected in this ball and their balance gave rise to a kind of middle state. As I understand Attakeria, this is some kind of core or concentration of energy. But so far I do not fully understand this “heart of water”.

Something new about the Valley of Fire Flowers. So, after a series of intense manifestations in the last days of Attakeria in the form of a column of flame, today I noticed some changes in the surrounding space. In addition to the air saturated with fiery energy again, I saw that a fiery tree appeared among the grass and flowers. I attach an image of this tree below. Also depicted part of the space of the Valley of Fire Flowers.

In addition, Attakeria himself, lately, likes to appear in the valley in the form of a luminous face, without the full manifestation of the body. Perhaps this is another reason why Lucifer, King Paimon and other spirits call him fiery-face. It seems that Attakeria and other creatures like him “like” to appear in a similar form. For example, manifestations in the form of a pillar of fiery light are needed for some purpose, and in the form of a luminous face - just one of the everyday images. However, this is a rather curious observation.

I also noticed that during the manifestation of Attakeria, someone is watching this process in the desert. Sometimes it is one figure, sometimes two. They do nothing and disappear after the completion of the manifestation. 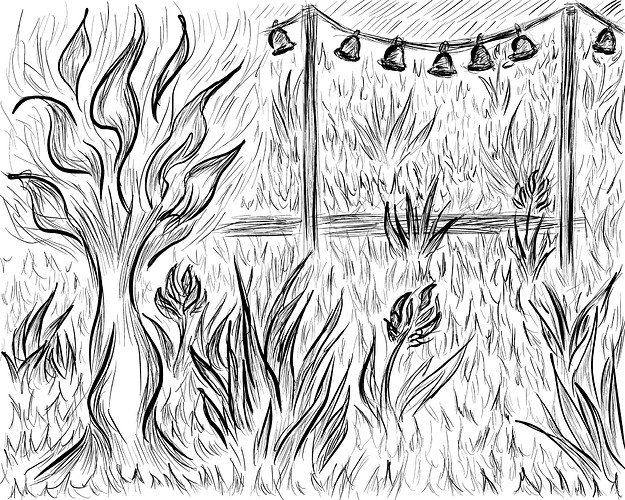 Probably, the study of the “heart of water” is the most difficult for me to understand. I decided to question King Paimon about it in detail, but he only clearly indicated that it a “concentration of energy / power” and more vaguely hinted that this was related with Attakeria (in more detail, he said that “… having cognized the heart of water, you will cognize a part of Attakeria’s soul”).

Then I decided to turn directly to Attakeria for an explanation of all this. He practically repeated the words of King Paimon, only he simply said that it was “energy” or “strength.” When I began to ask about what kind of power it was and whether Attakeria was involved in the creation of the “heart of water”, he replied that "it already existed and he was not involved in its creation”. However, he knew “the power of water, its ringing and silence.” Naturally, these words had a figurative meaning and I was not at all satisfied with such an answer.

I continued my inquiries and this is what I got in the end. Attakeria, like his “brothers”, cognize the spiritual basis of a certain element (apparently the “heart of water” somehow concentrates in itself the spiritual energy or the power of water). That is, what “stands behind the apparent manifestation” (apparently the physical manifestation of the four elements was meant here). This is necessary for them to “work” and is associated with the “location of the gate.”

That is, initially, apparently, Attakeria did not possess such “knowledge of the heart of water.” And only a little later he had to comprehend it. Moreover, to comprehend in such a way that this knowledge has become a part of him, his being. Apparently, therefore, where Attakeria manifests itself, water is always present.

All of this continues to be rather obscure. But at the same time, partial cognition of the “heart of water” opens further questions about the nature of the “work” of the gatekeepers of the Fiery World and their use of the knowledge of the elements in their activity.

I dimly sense that this activity is multifaceted and is not limited to just opening or closing a gate (I mentioned this earlier, but now it feels more clearly). But, again, about this it is necessary to question Attakeria himself in more detail.

It happens that I am imbued with special sympathy for some of the heroes of my pictures. So it happened today while drawing one of the spirits of King Paimon. This is one of his musicians named Themaris. I mentioned a little about him in my art journal. But now I would like to note in a little more detail, after a whole day of observing my feelings, that the state of “inspiration” that appeared in the process of working on his image does not leave me.

I can usually feel a certain energy in the images that I create. However, today’s work result is a bit atypical for me. Because I got a lot of creative inspiration to work on two of my literary projects. They are associated with the desert and in general, let’s say, with the bedouin or nomadic themes. But among all my ideas, it was to them that I began to feel a particularly strong attraction, as if something was pushing me to start creating them.

I don’t know what triggered this effect. Perhaps my initial sympathy for the image of Themaris gave a response from the spirit in the form of inspiration…

It’s pretty curious. I did not set myself the goal of calling this spirit and asking for something from him. My task was only to display him most accurately in my drawing.

Anyway, I started writing the first of these two projects.

It seems that Themaris’s “inspiring” influence followed me into my sleep. I found myself in some kind of large stone room, similar to the hall of a medieval castle. There were tables and chairs made in the Gothic style (perhaps such items were used by the then nobility). But the surroundings of the whole hall were not too important for me, since I focused my main attention on the notebook that was in my hands.

It was covered with various texts, both prose and poetry. And I tried to find a free space in this notebook in order to write down a new poetic text. The most interesting thing was that when I found a free space in this notebook, I simultaneously wrote and clearly pronounced the text of the poetry. In terms of volume and size, it was a ballad, and in a dream I clearly understood each of its lines.

Then I began to sing the lyrics of this ballad. So, humming, I went up to the second floor (as it turned out, the hall had a staircase) and began to play the organ. I was singing a ballad, accompanying myself on the organ. After a while, I heard how the sounds of a violin joined the sound of the organ. All this together made up a beautiful and heartfelt melody.
And again, I very clearly remembered the melody and all the words of this song.

When I woke up, my first thoughts were: “It was wonderful.”

However, the most offensive in this whole situation is that I practically forgot both the melody and the lyrics after I woke up.

P.S. It would be interesting to experiment with the possibility of creating poetry with the help of spirits through dreams. The main thing is to remember them clearly after waking up.