The story begins: I know a lady who owns a house she got married then finally escaped him when her youngest was 6 or 7. The lad who owns the house lives in a different place with which she rents. Her 3 children are adults. So she used to be a drinker every night about 15 plus years. She works in a health food shop one I frequent. Now about 2 years ago I read her palms full read in detail. Which as I was finishing my palmistry course I was doing them for free (bad habit😜). So she has since then seeing the benefits from it and still gives me discounts—haha weird now now the boss & his wife do that with me now also—
Then I moved house 9 mnths to day i performed the 9 knotts spell. 2 mths after I had moved into our new place her dog becomes very unwell and people who owe her a substantial amount not to mention she had pet health cover. I felt moved to help her not out of pity as I used to with people. So i made the offer as “I can hrlp with that” she asked how reply “same way I got my new place” she agreed and swop mobile phone numbers. So i made a justice stone “talisman” over three days on the 3rd I had visions of her dog its breed which I didn’t know,and the dog was put to sleep (very old and very ill) and passed on to her about the vision, & the stone with instructions on where to keep the stone how frequently to smoke it with incense et c… so after about a week she suddenly stopped drinking and its been over 6 mnths and she had a couple on her birthday and no alcohol. She has received bits of monies but not all thats owed… this being a justice spell /on bloodstone with my own twist. Then she receives a bit more and last week about $200 + . Now she has helped mee out with things especially last winter and makes chicken bone broth soups -great recipe- she gives them to me whilst the asthma is “####” these last 3 wks. Her whole lifestyle has improved attitude and demeaner how she deflects other peoples & her own negativity and communications with family and other. Now yesterday she asked me to do a spell and vaguely mentioned a divorce. Somethingshe had not officially done.
today when she gave me the broths (they’re frozen) she went into detail. So here it is and thanks for reading the background:
She owns the house got married and as soon as planned her escape

. The house she & her youngest share is a rental. She has finally got the steel determined resolve to divorce and has said she would settle for half of that money on the sale of the house which he will then have to do.
I know this is influenced by the justice stone as i said i put my own twist to it.
Now I have seen a marvellous spell wherein you evoke King Paimon and a money sigil that you invoke.
Augustus Gregorie vlog #10.

The Work Of The Grigori

Now she will provide for the details etc. As the othet spell had pretty much run what i believed to be its reign and she like I said gone out of her way to assist me i asked if she wanted another reading but i had no idea the scope of vision. I csn patterns flowing around.
I let her know that I feel that this is doable that I feel good about it and of course we both know that I must recover completely to be doing this type of spell. (Completely enough)
I feel excited about it and why not

What I am asking is for wose responses with Ideas because this is a newer one for me. I feel she should get All of the money as she is actually entitled to it. The ex in question is a drinker violent drug smoker … et cet. For those who do enjoy alcohol and what have you it doesn’t bother me I am not judging someone else’s pleasure. Hahaha I do have a thing against violence to the innocent 《usually women & children》

Please and Thank You for advice and wisdom

Thanks. … i was fantasing that she should get the lot he be forced to compensate and prection… hhmmm
And Belial @PrinceX & @Duchess
Will look up Saint Expediate Saint Death i hav never heard of these Beings

Bump. I did this for Clauneck and Belial but as I was still not well at time of preparation I feel as though they were not listening or because I wasn’t well I was not able to hear responses from them. I have redesigned a contract
Below is snap shot of proposed contract. … covering up the names for privacy 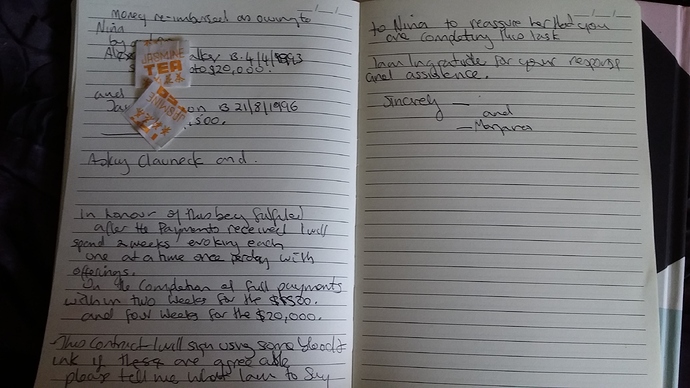 It seems that I Really Need advice here.
As mentioned at time of original posting i was still quite unwell
Thank you in advance