Manipulating the Threads of Existence

Ok guys. Pretty powerful encounter with a being I had for me personally.

It’s a little bit of a long story that stretches over the span of a couple months and an evocation of another being I had just done prior, but for the sake of the post I will keep it to a minimum of the bare encounter I had.
After the first being I had evoked had left I sat meditating and projecting myself just right in front of my body.

As a result of something the first spirit had told me, I began to feel like my sternum had unfolded itself, and oceans were pouring in through my crown and out of my body. Visions of planets and stars and galaxies began to flash before my eyes. I was projecting inside my room, but it was as if the fabric of time and space had been pulled to where all the hosts of the sky sat before me, and a portal looking thing with odd writing surrounding it.

I began to feel different… I felt very old. After a short time I became aware of strings, or threads, that were connecting all things. Each thread connected from one item, to another: intersecting and crisscrossing. It seemed almost impossible to discern where to begin, until I noticed that they were also connected to me, and I to every other item in existence.

After becoming aware of this truth, a very, very, large being made himself known to me. All that was visible was his one large eye about the size of a car looming above me. It seemed a bit reptilian. The rest of his body seemed to blend in with all of creation. Sort of like those kinds of pictures that say “how many faces do you see?” Although the original artwork on the surface is not a painting of faces at all. You just have to train your mind into seeing them. That’s what this being was like.
Without words, he began to give me the knowledge of how to use these threads of existence. He started with simple manifestation and “speaking” things into existence. He told me that the entire universe works with vibration whether physical or spiritual. And when you speak certain things… you vibrate those strings, and it manipulates reality.

He went on to say that there in that realm, you can simply grab the strings, and manipulate them.
I became concerned that if I did, it might upset the order of things. The amount of threads crossing over one another already looked like a tangled mess.

He started to get quite passionate about the idea I had of “messing things up.” What he said to me next was not in words, and quite honestly a little hard to fathom, much less translate, but I will do my best.

He started saying things like “You think the universe is perfect? It is not. The universe is subject to change from second to second. Nothing is solid. Why do you think people are so unhappy with their lives? The entire universe is based off of entropy and chaos.” Now mind you. None of that could possibly even come close to the way this being communicated, so it doesn’t quite hit home compared to the way he said it.

I took a minute to reflect on the things in my life I would like to change. So I grabbed the threads connecting to those things. The feeling of it just seemed to come so natural it was like I knew what to do. So I began to sew together what I had liked to see changed. While I was doing this, moon phases flashed by above me, repeating the moon phase cycle over and over again. Which made me realize that these strings connected things not only over space, but also over time. As I sewed into these threads, entire months seemed to flash by.
I will update you as to how I see things change.

After I changed what I wanted, for some reason tons of other beings were standing in my room watching me. I thought they were going to stop me from messing with the threads or something, but they just stood there and watched. Like I had an audience. After a while I started to realize they were all giving me an immense amount of energy. It all seemed like some kind of ceremony. 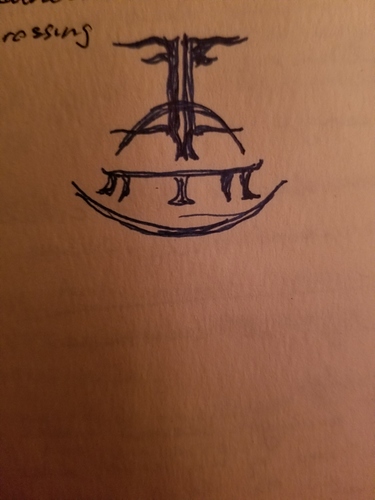 When I asked the being who he was this was the sigil he gave me. Does anybody recognize it?

I’ve tried several times to sleep since but keep waking up gasping.

Thanks for sharing. Sounds as if you had one of those great experiences we all yearn for and do not get often enough. What I notice about that sigil most is that it doesn’t look particularly like a sigil but a coat of arms rather. When I noticed this I remembered you mentioned several beings aiding and filling up the room which would make sense. I actually get a feeling this COULD have been something less spiritual and more extra terrestrial. And you made a connection. Either way thats awesome lol.

I actually get a feeling this COULD have been something less spiritual and more extra terrestrial.

Huh. How interesting. Have you ever had any dealings with extraterrestrials?

Like the norns themselves, you are learning how to weave the tapestry of fate. Time and space are relative so these strings connect all at once. The only way to keep spinning the web of wyrd in your favor is to keep pulling the strings.

As for the entity I don’t have much to say besides he seems like one who knows, but not one who controls. Someone who observes and teaches but doesn’t pull the strings himself.

No I cannot say that I have. That was what came to mind so I wrote it. However that sigil and your story really screams “group” and not a single entity to me.

I used to have some memories that used to make me think I was a norn in a past life.
And no he didn’t seem like he controlled. Just like he guarded them.

Very cool experience! Sounds a bit like Indra’s Net to me. 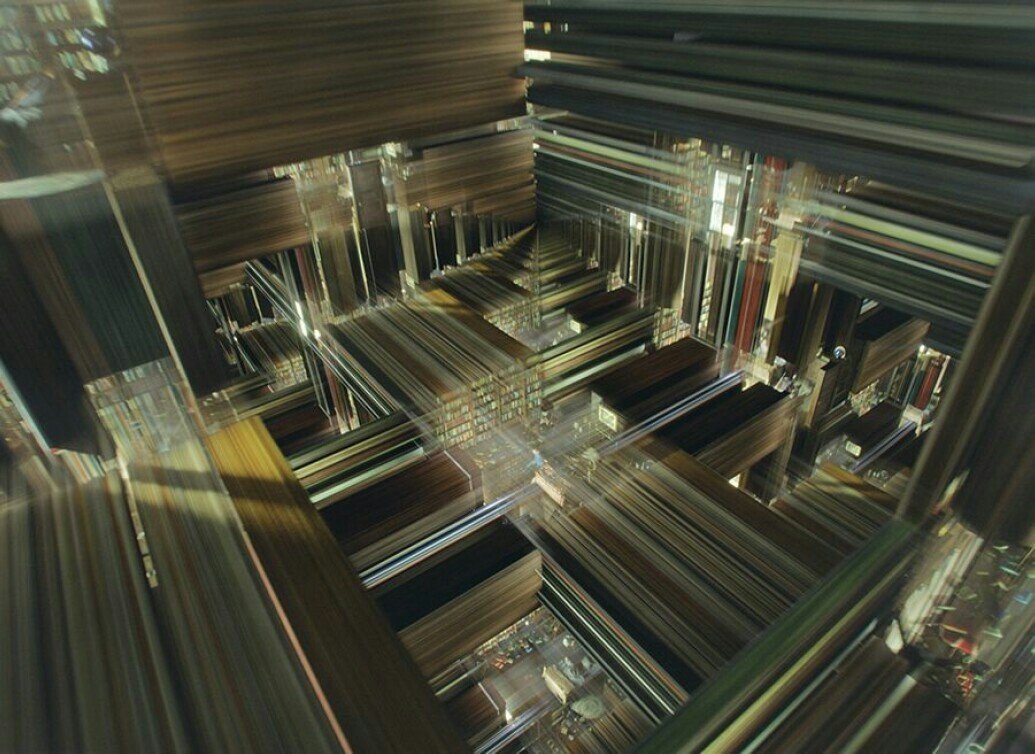 Perhaps when it comes down to it, all magick is really just more or less effective ways of manipulating the Cosmic Loom to weave reality as we see fit.

I just read it. Wow yea it was like each object or person connected on the threads were like the jewels that it speaks of. The more I think about it just the more profound it gets.

I had an experience where I was visited by a group of beings that refered to themselves as a family. The women were all knitting with black yarn that looked like space or void and fed into the sky. They said the universe was expanding and they were adding to it.

Much of what they told me was similar to what you posted and reminded me of the greek stories of the fates weaving peoples destinies etc.

When Belial explained the nature of reality to me he used sacred geometry, patterns and that all life is connected by threads and how you can follow them to find other people. To alter the threads and manipulate reality.

I think it’s absolutely amazing that we have the power to do so. I thought the people in my room were going to try to stop me, but it’s like they gave them up to me. Insane…

True! Anytime I’ve done extensive meditation for long periods, it seems to always be followed by visions of extraterrestrial aircraft, sounds of otherworldly beings, and a feeling of being one with the universe. I believe Serpens is correct that magick and extraterrestrial existence go hand in hand. All time and space is now, and when we evoke and meditate or go into trance, we become one with everything.

I completely agree. I think spirits and “extraterrestrials” have a lot in common. I’ve had a couple experiences that seemed like a typical “abduction” story, although I don’t think I was in my physical body, but rather taken from my body just as any other spirit has done.

When I asked the being who he was this was the sigil he gave me. Does anybody recognize it?

That looks more like a structure of some sort than a sigil. Have you tried scrying into it?

Immediately I thought of an obscure sigil I had made some time ago with I never expected to show anyone. I figure it was more just related to me. I feel like it have to do with descending. A lot of people talk about ascending but I found the path of descending. Through that I discovered many realms such as the dark cosmos, the abyss, the deep, emptiness and more. I think your journey has surely begun and you are well on your way. btw I made this picture like 4 years ago… around the same time I started the lhp. 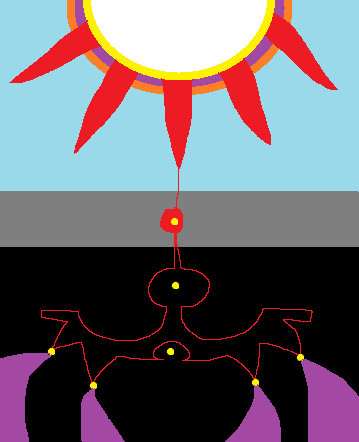 Unfortunately I’m not very experienced with scrying. I would need a black mirror correct? (Or an obsidian sphere or black computer screen)?

No. You just gaze at the sigil with the intention of finding what it connects to. At some point your attention will turn inward. At that point you will begin to see what lies beyond the sigil.

Oh simple. Okay I see. I do intend to do that some time soon. After this evocation I was not able to sleep so I’m running on fumes here

Huh. Yes I can see the similar structure.

Yeah. Recharge your batteries. Do some energy breathing before you start.

Do some energy breathing before you start.

My first step to everything