So I have this huge book with a million different magick squares. But how do you know which ones to use for what?

I mean I assume you would get the magickal properties of fire and Jupiter
But wtf?

And why would you use Taurus
Fire - Jupiter and not Gemini. Fire - jupiter?

Could you post that particular square? Maybe someone can give a theory then why.

Squares are powerful cifred Information through the power of the witch who channeled it. Actually every witch should have his own square but use other squares from other witches too

Yea but I need to know which ones to use for what that are in this huge book.

If it’s Abramelin’s use divination like open the book randomly and see which one your spirit guide wants you to try. There are squares like the Satan natas, Lucifer reficul, Leviatan nataivel… Sator arepo is a protection square

There are a like a million in this book. 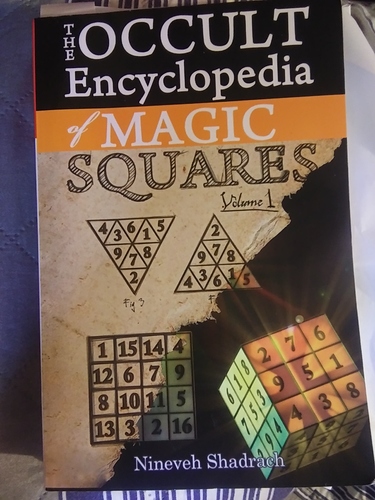 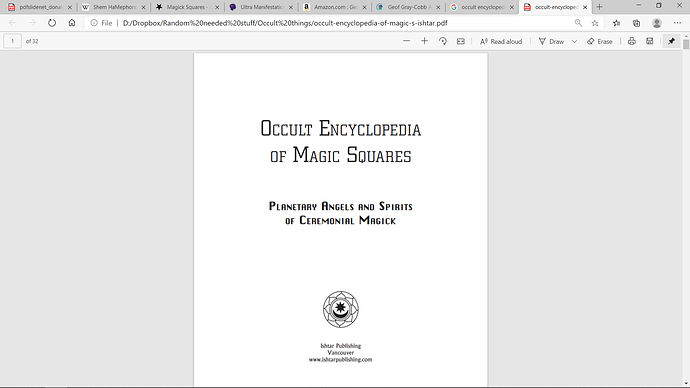 Is it this book? Uhhhh my version doesn’t seem to have a title page other than this to compare author/publisher on.

edit: It does seem to match the amazon version I found with your cover. I’ve only got the first 32 pages, but it seems if you want to know what they are for other than general sign relations you need to translate the numbers back to the Hebrew chart given earlier and then… Idk…

I only see like the first group is all titled as Aries. Then I have a bunch on the Lord of Triplicity by day. I would assume the Lord of triplicity refers to the astrological term triplicity, which… essentially means that if you translate it out and figure out which day it corresponds to you should be able to determine which Lords of triplicity it is dealing with…

Sounds complicated to translate backwards to Hebrew then try to figure it out though. But then I also noticed the number charts that have angel names and such so maybe you don’t need to go to hebrew. I’m taking a look at this book on Mandalas for the Western Magician, and he seems to have it all broke down by which numbers represents what. Buts its kinda a dense read and tedious to go back and forth to see what numbers he’s got laid out where and what they should represent, but at least I managed to find all 276 pages of this one.

The reviews on amazon all pretty much indicate that you need to have some knowledge of how this works to use the book lol, so I’m not really sure where you could get help on it

Triplicity is one of the most misunderstood and neglected types of rulership in traditional astrology. I have written on them in the past, so I don’t want to re-tread too much ground. Let’s briefly recap what triplicity lords signify.

That you so much! This gives me something to work with.

I do believe it’s the same book. Although my book has like 760 pages. There are squares everywhere and zodiacs and then elements. And then the charts so I was really overwhelmed.

But I can read through your link and go back and hopefully I will be able to find what I need. And how to use it.

Yeah sorry, I couldn’t find a pdf or ebook to buy even, just several links to the first 32 pages. I was curious enough I probably would have bought the ebook version if I could have found it lmao.

The books he has on mandalas and Love, healing and prosperity seem to be available in full versions though, and the love one gives some insight into what he works with as far as empowering his magical things so… I may read through it when I have time, even though it doesn’t seem like quite a fit for me… I’m three pages in so I might change my mind or get some more insight to his books on squares lol.

That may not be the best link on triplicity, it was one of the first ones I found that explained it somewhat simply lol, but I’m hoping you’ll be able to figure out what you need from his charts with the numbers and Hebrew references in the begging or is it an appendix? idk the correct term other than its numbered with roman numerals lmao.

I got my full book from Thrift books. It’s an app and they are out of stock of alot of things but I also find some gems there too.

I just wasn’t expecting this book to be so huge lol. I feel like I’m back in school trying to cram for some huge test that I didn’t pay attention to in class

But I do think once I get the hang of it, it will become very useful.

The one for love does sound interesting. I might should check that out at some point too

I recently buy a book today, im pretty sure who wrote it is a member here who has results, definitely. He has like 12 squares, which u put candles on top. Such arina, tiphat, secor, etc. He even includes a metratron pray for money which he say its a good one. If not want to do black magic. And yes he even has 1 chicken spill, if u feel like too. Not necessarily. I tnk i pay $14, he has another names, not remember if kobo. Or similar sites not Amazon,