I will take into account these gods for the practice, I understand that the ulfhëdnar worship Odin, and address him as the one who grants the lupine fury, I always wanted to be part of a brotherhood mannerbunde of Lycanthropes. The question is not to transform as in the movies, there is something beyond that pushes me to want to manifest the internal wolf physically as a necessity for years. From my point of view a physical transformation would not be in such a short time as in the movies, but if it manifests the abilities of a wolf mixed with that of the human. it is my opinion. Suggestions and recommendations on lycanthropy are welcome, thanks for the feedback. a cordial greeting to all. 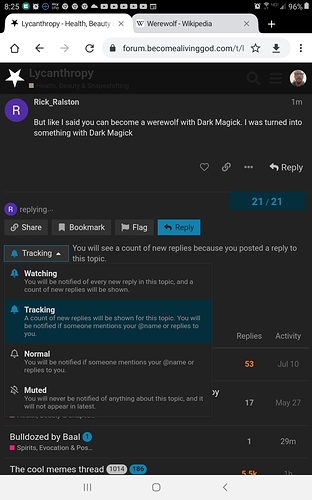 Werewolves have Energy that is close In frequency to demonic frequency

sure, but dark magic is a very general term. knowledge is needed to focus the path, gods … symbols … all around the werewolf. or what do you mean by dark magic?

was turned into something with Dark Magick

I can’t find anything about Tearflaham … Although I will value different methods before agreeing to anything with anyone, it is not that I do not want to, but rather that I look for all the possibilities and experiment to get where I want.

Tearflaham isn’t a known Dark spirit. He’s found in hell you won’t find anything about him online or in books

I understand, having his name I already have a door to him. and it is a spirit of lycanthropy

Historically speaking, werewolves (at least in European lore) have deep roots in the idea of maddness. The moon was believed to have an effect on the individual’s mind (hence how the word lunatic used to literally mean “moonstruck”). By suffering from “inflictions” from the moon, the individual could become crazed and violent, much like how real extremes of psychosis can end up. The adrenaline from those states can cause the super strength they are created with. Overall, I find the idea of werewolves used in literature from that area of the world to describe people who “became like beasts” as opposed to physically turning into one.

Now, for non European sources, many indigenous practices have some form of shapeshifting. This is done while working along with a spirit companion or totem during journeying (essentially traveling to the astral or ethereal plane, although those are more european terms). Shifting there allowed the individual to gain personal characteristics that they could take back into this plane, such as loyalty, healing and leadership in the case of a wolf. I am oversimplifying things, but even within those cultures, the idea of physically shifting does not seem to be present. The only exception I know of is the Navajo yee naaldlooshi (skin walker), who is created to physically shift into animals local to that area. If it is true, they likely are not passing that information down to outsiders though.

Werewolves have nothing to do with demonic energy, that’s something created from modern fantasy tales lol with a splash of a particular LHP path that uses the werewolf as an archetype.

People claiming physical transformations are likely not telling the truth. This falls into the “pics or it didn’t happen” category.

I started working with Fenrir about a year ago. I was having a hard time in my life and needed some strength. I came across him by accident but it would make sense that I would be drawn to him I alway considered myself to have a K9 sprit, I was basically raised by dogs. Mom and dad had no time for me so I always spent time in the woods with my dogs. I have done many rituals for him and talk with him a lot. When my Pit Bulled got sick and died I asked him to watch her until I got their. At first I thought maybe I shouldn’t of done that but after what happened three days ago I know I did the right thing. I was doing a cord cutting ceremony to cut the cord with my abusive father who has been dead for 8 years now. During this exercise I saw a big forest
In front of me. Looking up I saw Fenrir and standing in front of him was my Hanna. I call her my Goddess
Shankari Kumara. She rushed up to me looking furious and I got a little scared but she grabbed the cord that connected me to my father and she ripped it off me and shook it. She then came over to me and rubbed against me. She started to leave but I said not yet she came back licked my face and then went over to Fenrir. He turned and looked at me with a look that made me feel satisfied I did the right thing.

Welcome @Tarn It is a rule of this forum for all new members to properly introduce themselves, so PLEASE CLICK ON THE IMAGE BELOW and tell us about yourself and any experience you may have in magick, such as what you practice, how long you have practiced, areas of interest, etc:

I will find them no matter where they hide