Here I will be showing and releasing my crazy intense magick experiments for the first time, never do I share these type of workings for they can get crazy and intense.

I will be doing various experiments of strange methods of evocations, possession, soul travel, energy work and things I yet have to stumble upon.

I’m also open to suggestions and some dope magickal experiments in general.

So here we go updating it soon.

Experiment I did a month back.

Experimentation For A New Manifestation Base.

I took a bottle of red wine, crushed up frankincense and dragons blood, three pinches of salt, several drops of blood, water and crushed bay leaves and olive oil.

So I took a huge pan, I poured in quarter bottle of red wine, half a small cup of consecrated water, three pinches of salt, crushed frankincense and dragons blood into a powder, added that to the mixture and several drops of my own blood.

Then I added the crushed bay leaves into the mixture and added eight small spoons of olive oil into the batch.

I then began to boil the pot and heated it to a extreme boil, I then put my right hand over it and began repeating.

" Ala Tal’ala Bee Shon Dala ". I was told to repeat this incantation of the boiling mixture pushing energy from my Zeal into the liquid.

I then placed a heat proof mat on the kitchen flour, lit candles opened a sigil and evoked Azazel I then took the pan and placed it on the mat, a huge cloud of steam began rising.

I then structured Azazel’s body in the vapour I was shocked to see, that the form of Azazel was more solid than using coal, incense resin and blood.

His form not only manifested extremely quickly but was solid and when he materialised he changed the odor of the steam.

That was a interesting experiment indeed. 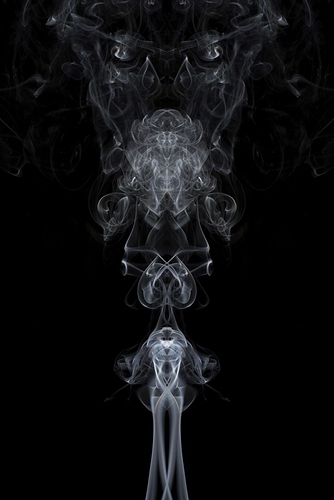 One thing I wanna say is that water amplifies energy. It’s a very psychic element. So it ties in nicely

Beyond that I like that idea. Have you tried different corresponding incenses for different spirits?

No not yet might go back to working with it this is just one dope idea I channeled and just ran with it experimented with it and then moved on.

It pretty interesting. Thanks for sharing.

Conner you could honestly write your own book.
If you haven’t already though I’d be a little shocked.

This is a slate tablet I created the symbols, sigils etc and their order was channeled from specific spirits.

The tablet was a magick device that combined various powers and energies in a circuit, the experiment was to see how different polar powers could be combined in unison to produce a new source of power.

On the tablet is the sigil for Azazel and Lucifer when opened awakened they flow and radiate with complete demonic infernal power.

Next is the seal of the sorcerer this symbol gave me control and authority over the three major spiritual energies Demonic, Angelic and Astral.

Next I was instructed to employ the elemental and planetary symbols and awaken them, using specific astral techniques I combined the flow of the energy to create a loop like a astral wire on this spiritual device.

I was then instructed to employ the miniature symbols at the bottom, the leviathans cross and the mjolnir symbol.

This was a odd combination of symbols, so I bound a spirit I met from the netherworld into the tablet to act as a chip for this device making sure there would be no energetic imbalances and to force the energies to collaborate without self destructing like Malzaz Hyroth the spirit bounded to the Universal Circle.

I was then instructed to use the two dragon heads above, representing order and chaos, female and male.

I then used a inverted pentagram in its centre, to be the main focal point, to act as a empower symbol, that would emit a huge range of energies, that I had to perform various energy work on to align all the energy flows into the pentagrams centre.

I then anointed the tablet with a elixir which was comprised of Moss, Blood, Semen and water.

Once anointed the tablet was consecrated and charged in sunlight and moonlight, I would then call various angelic, demonic, planetary and elemental spirits.

When the spirits manifested before me, I would use the tablet to usurp their power and stored the power within the tablet. To stabilise the power I placed the tablet on my altar and did meditations and soul traveled into the astral matrix of the tablet.

Combing these techniques, various other oil, crystals and gemstones and Tai Chi exercises all devoted to the tablet, I then had a tablet which could absorb, store any and all types of energy.

Without causing imbalance, I constantly had to keep working on the astral dynamics of the device if you will finding external sources for stabilisation and to solidify and combine the energies found therein.

So I used various star constellations, like Algol I even used the cube of Saturn to align it with the vibrations on my altar which surrounded the tablet.

I then used a blend of basil, Dry ferns, crushed dandelions, blood of myself and another human and sandalwood incense I blended all of this up and burnt it and allowed the smoke which produced the correct energy needed to fumigate such a device.

To finish the device I performed various dark rituals which bound legions from Lucifer and Asmodeous to the tablet, each spirit in the legion was working within the tablets astral matrix keeping its function going.

To feed the tablet one final time I gave one blood offering, blessed and charged the material of the tablet with rain water which absorbed power from the solar eclipse that we had.

The end result was impressive and resulted in a device which can absorb any power, energy or force without diluting the source of its power.

The device would store the power and would act as a nexus empowering all spells, rites and magick acts done in the temple.

Interesting experiment indeed, this shows how a magician can simply force powers together which shouldn’t work In unison but by the application of the magicians experimentation, will and power the it was a success. 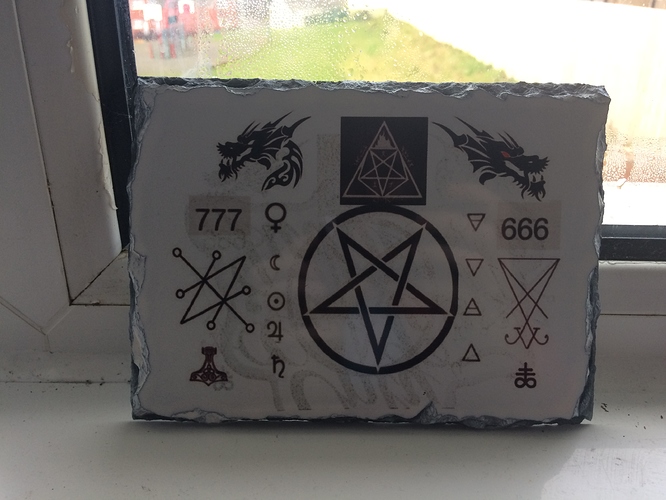 Who said I haven’t

I recently combined the rune Pertho.
This rune is the revealer of secrete or hidden knowledge, occult abilities and initiator into mysteries.

I combined it with another tune, which was the rune Kenaz. This rune is vision, revelation, knowledge etc. Once I combined these runes into one runic symbol something was missing.

I then added a third rune which was Hagalaz this rune is the wrath of nature, destructive and uncontrollable forces. So this runic beast was three runes intertwined together. This tune initiates the magicians and reveals the knowledge and secrets of the uncontrollable so the magician may gain control over the forces which are uncontrollable.

I drew this powerhouse of a rune on paper mixed my blood into its ink and vibrated the three names of each rune as a mantra. The actual symbol was sat in my runic circle. I then activated the runic circle awakening the dormant power within this new rune.

I began opening it as you would with a sigil, the circle began glowing and I saw lines of energy feeding the power of all the tunes into the symbol before me. I then fed the symbol with energy from my Zeal Chakra, I looked into the symbol and have been experimenting with this super rune i’ll be updating you all soon on this side project.

This experiment came from the inspiration of the story of mirror mirror on the wall, you know the classical witch asking any single question and a entity tells them the answer.

I thought hey why not huh !.

So I did a blind Evocation found a spirit who was a spirit of ‘Knowing’ a entity which was almost like a embodiment of knowledge.

I channeled it’s sigil, and took a black mirror I made myself, i then drew a huge version of the spirits sigil. Then I anointed it with blood and opened two gateways in each side of it one of water the other fire.

I began chanting the spirits name and enn, while solidifying the astral matrix of the entity inside the actual mirror.

Upon analysis everything seemed to be working, I decided to fortify it just a little more, by consecrating the mirror and then rubbing a array of crystals upon the material, which the entity suggested.

I hung the mirror in the spirits direction, and used gave the spirit almost like a activation saying ‘mirror mirror on the wall’ as soon as I told the spirit this and harnessed my intent for it to appear and answer my question it worked.

Obviously this is different than merely communing with a spirit using the black mirror as a medium. Just a little experimentation once again, from a sleep deprived black magician

That is so cool!

I think I see how most of it works, but would you mind elaborating on the business with the gateways? What did they do for the working, why fire and water but not other elements, and did you close them at some point? Just super curious.

I used water and fire because they are two of the major gateways.

Combining those gateways can also stimulate other spiritual gateways like the black mirror.

@C.Kendall I want know a new path of vampyrism, but that topic has been removed, why?