After reading through various journals, I’ve decided to start my own. Whilst I will not share everything I do as some is more personal to me, I’ll try and share something every day in this. Be it a sigil I am working with, or experiences evoking any entity.

Hoping that this also motivates me to continue branching out in what I do practice path-wise.

I have a long history in overreacting to things others have done even if said thing was inadvertantly my fault. Because of this, I’ve lost many friends in the occult communities over the years, and have spent the last couple of years breaking past that personality trait of mine, and well, I believe I have had success and have managed to rekindle my relationships with a few of them.

Why does this fit in here? Because I couldn’t have changed that part of myself without occultism - It has, and still does help me drastically change parts of myself that I can’t even begin to manage directly myself. Tonight, I am embarking on an endeavour to begin to incorporate more meditation into my routine to further improve myself in these manners, (specifically, energy meditation, as from my current experiences it allows you to examine yourself much deeper than you would be able to otherwise).

In other news, tonight I evoked Saraswathi (Hindu Goddess of Wisdom) for help with deciding something. I immediately felt her presence and got my answer, though it wasn’t quite what I wanted. But that’s the nature of these things I guess.

Tonight I decided to get back into automatic drawing. This following one I do not quite know what entity it is a picture of as of yet, but I do know that it’s female. I would appreciate any feedback on if anyone feels anything from it.

You can clearly see it, though, the head looks interesting. It does not appear human though the exact type is also unknown to me.

(For anyone who does not know what automatic drawing is, it’s a type of divination where I close my eyes and enter a meditative state and let my energy draw for me. I have to keep my eyes closed to avoid messing it up though, as if I guess what it is as I draw, my hand will often by influenced by that, often in a negative way.) 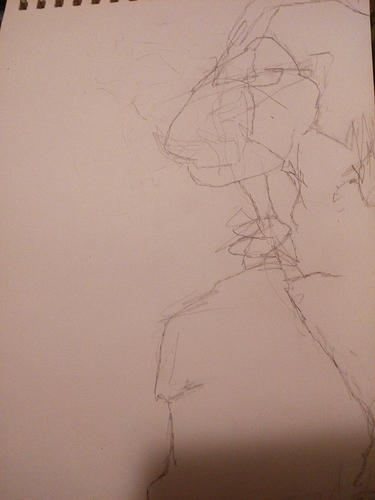 At first glance it reminds me of something that ‘pretends’ or wishes to be human. Hence the humanoid appearance, but not quite. It has a softer sort of presence. I get a whisper like a soft breeze. Very airy. Its gentle and curious, which is why it let you draw and pick up on it?

I don’t normally look into pictures

So that all that information with a heavy handful of salt. You just offered, and I was like, this could be good practice.

Though maybe in the future, post the picture above the text, spoiler (Hide Details - it is under Options) your impressions, then ask for others impressions on the picture ^.^ This will help combat leading or AoL.

I am impressed that you are able to draw blind. I have read about automatic writing and drawing, but never met someone who could do the drawing part

Thanks for looking into it. I’ll be sure to hide the details in the future, I normally try to avoid any frontloading (the term i use term for it), but didn’t quite know how to hide it on here yet.

Personally, I am completely incapable of drawing when not doing this, which is a curiosity to me as this is one of my better skills related to divination.

There are so many different terms for the same thing haha Its part of what makes this fun.

Thanks for sharing the drawing! It does have interesting vibes to it, even if I can’t quite pick it apart like I’d like.

If you don’t mind sharing, where did you learn about psionics? The way you describe energy and fields are unique and I haven’t seen around here. Mind you, I was only heavily into psionics when I was a teenager (like ten years ago now) so its natural that things shift and change and evolve and grow.

So, after talking to some friends, and realizing that the figure’s head looks like a lion, I began to do research. The actual appearance of the drawing looks heavily similar to how Maahes was depicted, I am not entirely sure if it directly is a picture of them or not though.

If it is, that is a rather interesting occurance, as I haven’t had any previous interactions with Maahes, but I do plan to look more into it.

Truthfully, the only actual connection I have with the Egyptian Pantheon is a past-life soul-connection with someone involved with them.

I thought I’d post these here, these are two automatic drawings I did of my true self (soul) back in 2017, will likely be making new ones soon. 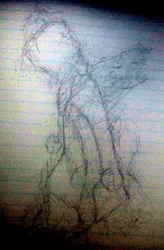 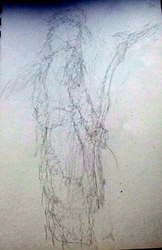 It’s been a few days since I’ve posted but here I go. I’ve been in contact with Vishnu as of late (I like to work with the Hindu deities due to my past life connections with them), and he has been helping me figure out more things related to my energy and soul.

I am not going to say much about it here, but I’ve vastly improved how well I can use my energy in the last few days, though, I do still need to get used to it.

Whilst I may be wrong as well, I feel as if a major event of some sort is building up, and will occur in the near future. No, nothing world-ending or something of that sort, just something that has a lot of energy behind it. I could be wrong though, but it just feels like it…

Been quite sometime since I’ve posted here, so, apologies for that.

Over the last few months I have learned a fair amount about myself that I previously didn’t know or was mislead on, and because of this, I have been making substantial progress in energy work and believe myself on the cusp of another “awakening”, as I call them. Though that is just based on a build up I’ve been noticing energetically, if it’s true or not is yet to be seen. The last “true awakening”, I’ve had was years ago, but I figure this could be the case.

But, moving on, unusually I keep getting constant reminders of some past ties to people that I had thought done with, but it does not seem so. So I’m going to be stuck dealing with those soon, I’m not sure how I should handle them per-say, but I’m planning on consulting with some spirits I trust on the matter.

I haven’t done much projection in the last 2 years comparable to what I use to do, I am thinking I should start ramping that up again as it seems I may need to work on a few things using such. Plus, I need to contact “spiritual relatives” of mine for a few things, and of course, just to visit ones that I haven’t visited in quite some time.

Tonight, I’ll see about projecting a large portion of the night, though we’ll see how well that goes with myself being a tad bit rusty.