Invocation To Speak With a Demon

Hi everyone! So I’ve been reading S. Connolly’s. The Complete Book of Demonolatry and she has an Invocation To speak With a Demon from the Dukante Grimoire in here. My question/s are: has anyone ever attempted this? If so, what was your experience like? Did you make any alterations? Any tips or anything along those lines? I want to try this myself and I just wanna know others experience with it. Thanks yall! 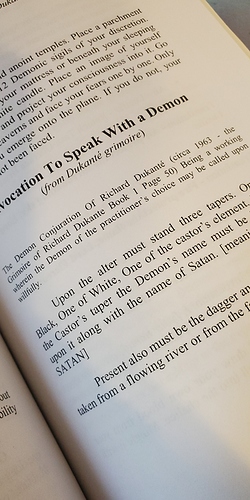 I generally have assumed spirits many times , it tends to be a good experience , I would never do it with a demon however

Invocation is the assumption of a spirits identity , I would rather call a demon to my exterior than interior

All in all just practice bro , with time it’ll get better , from my invocations I tend to get visions and I start to see the spirit encasing my body with my spiritual vision

Ok soooo upon further research lol I’m starting to think that maybe S Connolly’s definition of invocation/evocation is…different? Because at FIRST I was under the impression that she meant what YOU meant (by EXTERNALLY call a demon) but I was mistaken. My bad. I meant externally as well and from what I’ve gathered on this forum that IS evocation and invocation would be internally.

S. Connolly’s definition of invocation is different from the traditional ceremonial definition.

In demonolatry, which is a religious system, standard evocation is considered offensive to the “Demonic Divine” they worship, so they practice what they call invocation, which is defined as inviting the spirit to come for a visit, rather than forcefully summoning them.

Think of it like this: To a demonolator, evocation is summoning a demon by gunpoint, and invocation is politely asking the demon over for tea and biscuits.

In ceremonial magick, evocation is defined as the summoning of spirits externally to the self, and invocation is the practice of internally assuming the traits of spirits. Traditionally, demons were only evoked, and angels were only invoked.

Oh thats really interesting. any particular reason why only angels were invoked?

any particular reason why only angels were invoked?

Mainly because in traditional ceremonial magick, demons were considered untrustworthy, and as such, it was preferred to keep them outside of the self where they could be controlled.