It will be an extremely long and exhausting post that I will make, but just in that way I’ll be feeling better.

It is about an old lady that my parents know since a looong time. All the things were ok with her, till the moment she got hit by a cerebral cardiovascular accident an year ago or so. She stayed in the hospital for a considerable amount of time because of that, her whole left side of the body got paralyzed, it started to be difficult for her to walk, she needed crutches or something like that. After a period of time she found out that she has some health problems, she stayed in hospital for another period of time. 1 Month ago she got hit by another cerebral cardiovascular accident and entered in a coma… (2 days ago she died, she was connected at the medical equipment and was being kept alive by those)

I think she was feeling/sensing/knowing the fact that she was near approaching her own death
She and her husband started travelling to places and visiting places… Did she know that she’s about to die? All the people start doing that kind of things which lead to self fulfillment so that he/she will die without any regrets. My parents even travelled once with them and made some photos. My parents were observing the fact it’s difficult for her to walk and that she had a weak immune system. (when they travelled with them) Btw I can remember that I was home alone and that I was able to do everything I wanted.

She had been nice to me, but I was a douchebag

Sometimes she was stopping me on the street to talk with me. She was asking me about my mother, asking what my mother is doing, how my mother is feeling and all that stuff, telling me to tell my parents to visit her, etc. I can remember once when I’ve just left from school and I took a seat on a bench and she was asking me things, for example she asked me at which highschool I’d like to be assigned, (it was with 1 month or so before the school was ending) I remember that I told her that response “whenever I can see” . (that has been the most recent time when she stopped on the street to talk with me, it was 3 months ago or so) At least I entered at a good highschool (with some help from Vapula

) , it would have been nice to tell her that I got assigned at a good highschool.

An interesting thing - my brother appeared in a vision that I had almost a week ago.

Animals predicting events
In the nigth my parents got informed about the fact that it’s unlikely that this old lady will further live, my parents reported that they started hearing an owl as they were thinking about her and my mom started to be frightened and bla bla bla. The impression that this old lady will die got even stronger… The animals are known for predicting bad events, the death of a human, disasters, ghosts/entities/poltergeist activity.

At least she got freed by torments

That old lady didn’t have the most happy life… Whenever I went with in visit there she was getting insulted, blamed for everything by almost anyone. (by her kids, by her stupid husband) Also her stupid husband was beating her, he even cut her… And there are many details, but this idiot made her last years of life being horrible and should be punished in some way or another for that. If she’d have died just directly would have been the best thing. (after staying 1 month in a coma and a lot of torments, I don’t think that it’s worth to live ) At least I feel awesome that she’s no more in suffering. Btw, she died at 56-57, my parents are younger with just 4-5 years.

*Another thing which appeared out of nowhere to me in regards about the song would be that https://www.liveleak.com/view?t=smvA3_1532373662 and also the virginity is also mentioned somewhere in the comments of the video :)) , just like in the song, “I saw the Virgin’s cunt” ! 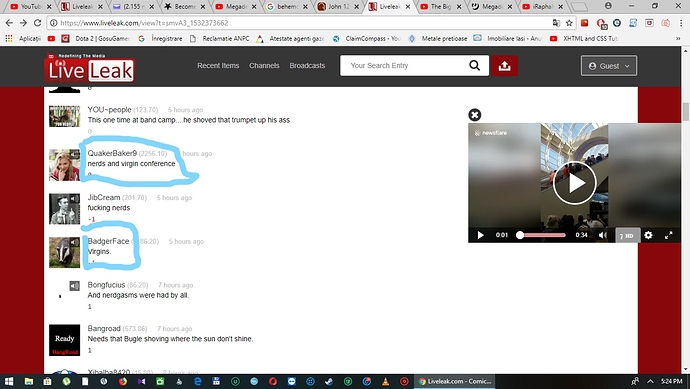 A detail which I think that many of you observed
Did you observe that after someone dies it starts to rain in more than 90%? (that happens especially in the moment the funerals take place) In the cases in which is not raining, it means (from what I’ve observed) that the person that died it was just a pain in the ass for others and that no one cares about his/her death. Today it rained a lot, that also happened in my dream. (the dream in which it was a violent/destructive storm that was able to destroy almost everything)

End
So, what you all are thinking? I’d like to hear about similar stories! I know for a fact that it will happen again to not get any response to my thread and maybe make others hate me. But I’ll be proud and happy if I helped at least 1 individual with that thread in some way or another. At least I’m feeling released of my guilty because I wrote all those things. (To write all that thread and for me to gather all those things it took 6-7 hours or even more)

Another point that I didn’t mention is the fact that at some points in that music video from behemoth, some scenes appear to be in the forest, the wolf is seen in the forest. Ahaha, and in this video https://www.youtube.com/watch?v=aNkQhQdmPTU that appeared out of nowhere to me it could be seen how those 2 things get combined in 1, the forest and the wolf.

Sodom and Gomorrah got mentioned again in a tv show that I watched last night and the fire appeared again. In that tv show everyone was thinking that it will come the apocalypse and that they have just 3 hours and a half to live and they didn’t know exactly how to spend their last moments. There it was a crazy character that hit and then burned a “monument” that another (an alcoholic, he was known as the biggest alcoholic from his village) character has built. Then this crazy character said that the apocalypse is coming and it will come just because of the fact that the other character has built that thing. That crazy character started to scream “You made a big sin! This is why the apocalypse comes! You built an idol and then invoked Satan! You invoked Satan! You invoked Satan! (then this crazy character started to hit that thing with a shovel and with his leg) Die Satan! Die Satan! I want Fierbinti (the place in which the action takes place) to burn like Sodom and Gomorrah, we are sinners! We built idols! (then he lights that thing and it burns) You sinners, you built an idol!” - the fire theme also gets mentioned there, haha.