Any recommendations are greatly appreciated.

I’m actually half assed looking into this myself. @DarkestKnight has definitely intentionally studied the subject more than I and might have a recommendation for us both.

(he’s my go to when I’m looking for more information, he’s basically a living encyclopedia. I’ve never had it as a goal or saw any benefit to it as my magic seems to work just fine on its own…

But I’ve had a few experiences lately that cause me to wonder if kundalini wasn’t exactly what I experienced.

I was incredibly tapped into the universal/collective unconsciousness or whatever you want to call it. One time was quite literally a near death experience due to ingesting something I shouldn’t have, but the second time was a few days ago, and while I could clearly distinguish myself from all that I was hearing and experiencing and the take away was you can do this now, you are awake and don’t have to forget…

It was really odd, but the intensity made me shake, it didn’t hurt like the first time but it still caused me to shake hard enough to scare the blazes out of me. There was a lot of conversation too, that sounded like someone giving me the rules so to speak for this incarnation, like what is agreed to prior or something.

So I’m not sure what it truly would be called and I’ve not done enough research on it, (googles apparently not my friend when it comes to experiences I can’t explain) but I’m curious particularly about control, because I can’t stand being able to do things, but only by accident or chance. If it’s somehow beneficial to me to tap in like that, I want to do it on will.

They said it would take practice. I’ve not even tried…yet. I’m not sure what book or practice to follow, so I was doing a pretty normal for me routine when it happened second time.

but I have found sobreity to be a huge factor in yoga / qi gong / energy work.

I think that it can go both ways. I have the medical weed for my state, and I don’t find any difference in ritual or result, but when I was newer to magic and that, I did find if I wasn’t careful it was an easy way to get into trance, and could become a crutch.

I’ve seen tackled that, bullshit on my pleasures standing in my way, and I’ve been told though I can’t confirm, that is why the spirits have never told me I need to quite either of my two vices.

It’s quite simply because I could if I wanted to and don’t. I’ve had times where I couldn’t afford the medical weed so I just did without. When winter rolls around I can’t be out with my lungs and I hate the cold so I all but voluntarily quit. I go from a pack a day cigarettes to 3 or 4.

When I was in hospital in may, it took me five days to be like huh, wonder why I’m not craving a smoke…

So I think it can all become a crutch, or interfere, particularly if you can’t discern the high from reality or spiritual from the high, but I don’t think it necessarily has to be a clean and cut and never enjoy your vices. It’s like eating healthy, I do my best but I’m not going to feel like I’m suffering to do it.

I think it matters whether or not you can willfully control them and discern how they affect your practice, but not if you do them.

I also still don’t get images unless I’m dreaming, projecting or they come from something outside of me, so someone with a visual imagination would have to work harder at discerning their minds high images from spiritual ones, than I would.

I meant alcohol, but I love that you both immediately went to weed

It is what I’m telling myself to quit. I do have plans for it… just not immediate. Who knows what the future holds tho. 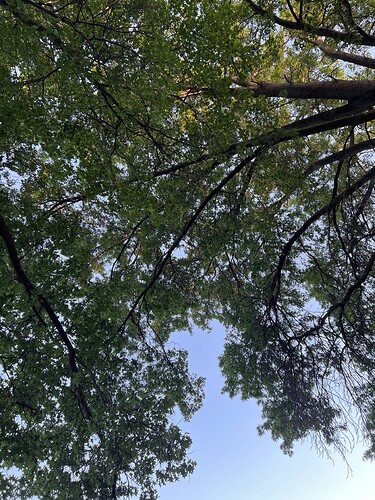 Todays view is stunning. I’m currently laying under a walnut waiting for the sun to go down so we can set off water lanterns for this festival.

Happiness is a great feeling.

Happiness is a great feeling.

Now that you’re retired, you can do whatever you want! Welcome to the club!

I’ve signed up for my next retreat with the Monroe institute. I’ll be taking their guidelines program the last week of august. 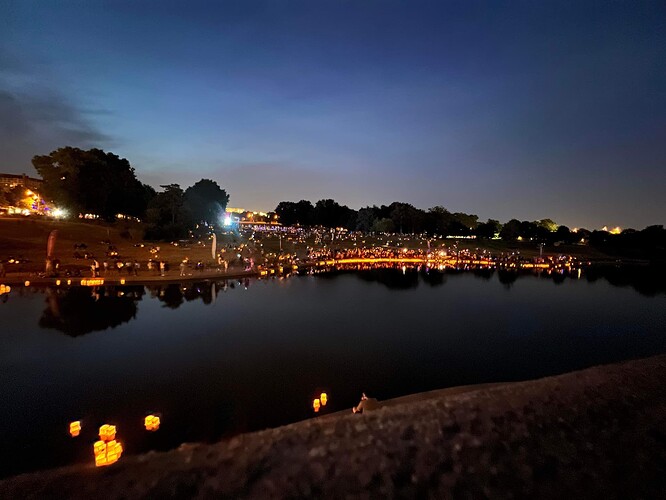 The lantern festival from last night

I’ve found a local kundalini yoga school. I’m not 100% on what I should be looking for to learn to raise my kundalini.

I’m going to goto this local facility and learn the yogic practice and hopefully get more information from them. I’ve also picked up this companion book as well to help with the process. I’m open to suggestions folks! 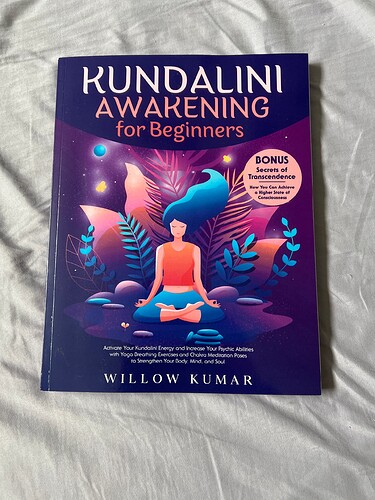 I picked up this book a few weeks ago that I plan on reading through. I keep seeing veil recommend Neville over and over so I thought I would give it a read and see if I vibe with it. 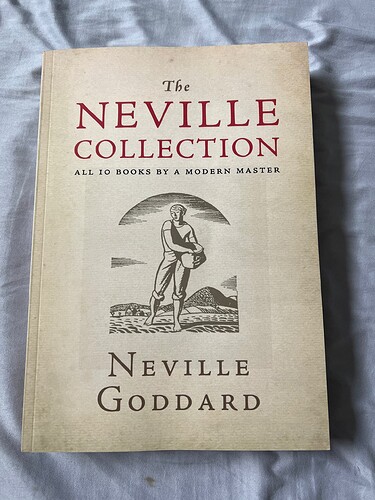 I am kicking around the idea of starting working through this book @anon39079500 worked through. I feel like I need to really work on empowering my astral temple as my place of power. 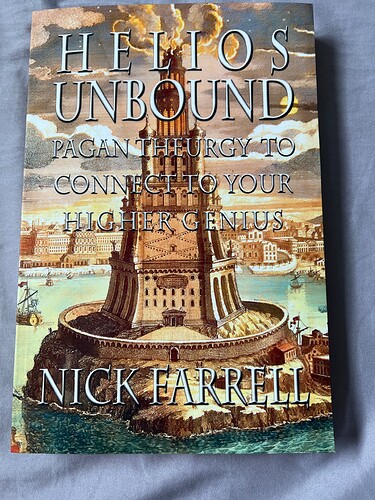 Finally a little Jung. Me and my psychiatrist are going to start doing a form of shadow work meditation in our sessions. So I’m going to do a little jung research. 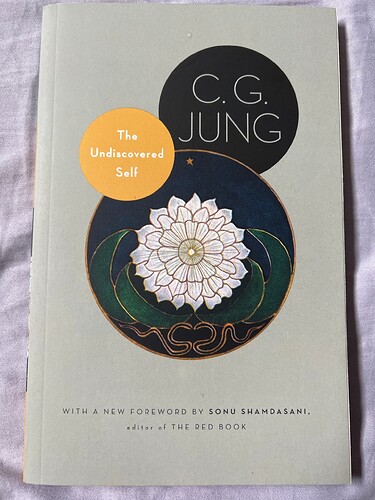 The Sun breathing from the book is quite useful, not just as written. Over time, I’ve used it to also burn away attachments and as a source of extra energy to send to those in need of it.

The pupper loves to scare from under the bed and I got a new wig today. 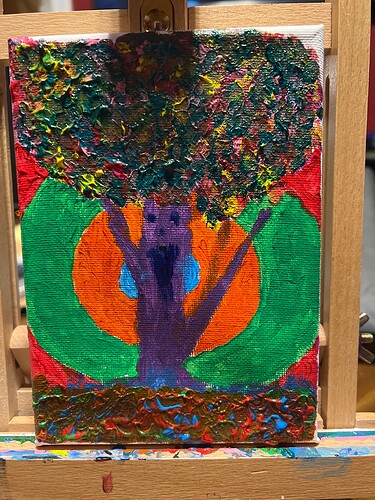 Painting with the kiddo today. 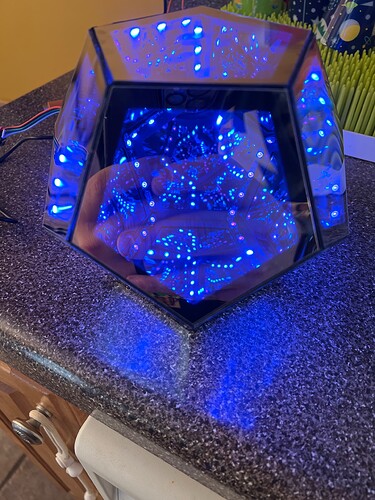 New toy came in today. I should figure out how to do a video instead of picture because this thing is pretty cool. 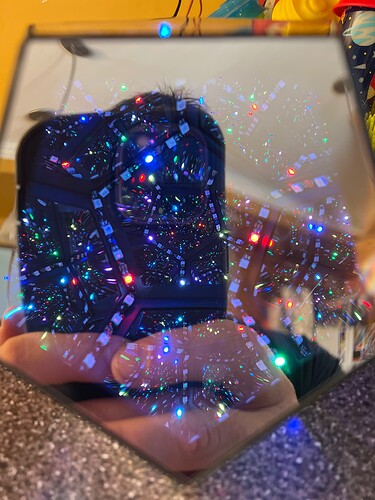 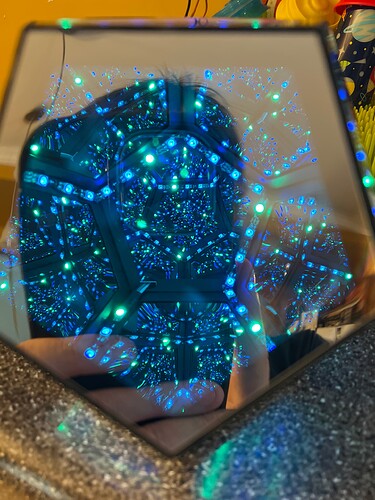 It was a Facebook impulse buy that worked out. They don’t always work out lol.

So yesterday I went and bought a big and badass baphomet for my altar.

While I was there the owner was telling me about why the had ordered all of them. Apparently this Saturday they will be having a demonaltor coming to speak in the upstairs classroom.

They then started telling me about the local orders that I have been looking around to find for years.

Guess I know where I will be this Saturday.

Did a little more on this guy today.

Started working on my energy conversion box today. Painting with gold is shit. Maybe I’ll try gold leaf next time and see if I can get it to adhere to the canvas.

Ok so it’s official, I don’t like the silver on the top of the angelic wings. Looks like fucking candy corn lol.

Painting with gold is shit.

Are you using acrylic paint? If so, try getting the brush a little more wet; it will spread better

You can get acrylic paint pens for very small details. Outlining makes a huge difference. For every solid line of color, you could try outlining it with a thinner line of a different color. This is what I do.