Ideas on identity of this being?

This was years ago . It is still fresh on my memory like it just happened. There’s not many dreams/astral accidental experiences I have that stick this way. I cannot willfully lucid dream or astral project like I could when I was young. It just spontaneously happens. I’m not sure if this was lucid or OBE. Its short.

I was more awake than awake and on a foggy grey landscape. All there was around me was grey and white fog like substance and the landscape was like clouds but darker grey. I was just walking along minding my business, then I saw a figure ahead of me quite a ways. It was the only other thing there. I had thought I was alone. I stopped, cautious, and studied the figure. It appeared ominous and threatening in posture and appearance so I didn’t move forward very fast. I wasn’t sure if it would attack me or not. As I crept closure the figure suddenly moved it’s hand up and motioned for me to come there to it. I paused, confused by the kind gesture, and then it hit me like a bag of frying pans. Vivid vivid memories like a movie played in my mind. The being was playing with me as an infant. Showing me things and teaching me things drawing in dirt with it’s staff. And the emotions we’re overwhelming. It was like more than a father. It was an overwhelming amount of love, like I had loved and known this being for eternity. As the visions faded, I was crying as I kinda realized what was in front of me, and I broke into a sprint towards it, as hard as I could. Half way there in mid-stride I felt myself fading, and then sucked away even though I fought it. And I woke up. And I was still emotionally overwhelmed and remembered the memories as vividly as if they were part of my conscious mundane memories.

The closest image I could find was this. The guy from Arkanum. I stumbled across his video on YouTube cause I love black metal, and almost shit myself. In my dream/obe the face had more of a straw texture and the staff was different. But this is the closest thing I could find.

Anyone have any ideas or guesses? Encountered any kind of being like this? 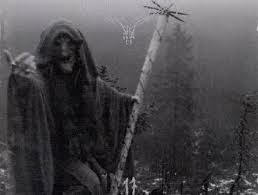 I wish I had something more to say than it sounds like a beautiful experience.

I think it could be any of the daemons we work with, and it sounds like you’re possibly like me in being what Raven Star called a ‘demon child’ - meaning your spiritual sire is a daemonic entity and you were a daemon before incarnating as human, as much as ‘before’ means anything for higher dimensional light beings.

What are Demonic Children? My experience with them Spirits, Evocation & Possession

Hello everyone this is Elena Night, I am here to discuss with all of you about Demonic souls, including my own personal experiences. So to start off everyone is aware that there are souls in human bodies, the soul (or whatever you would like to call it) is what makes a physical body tick, it gives the physical body a spark of life. Now commonly people call the souls in human bodies human souls. Human souls are unique in nature and are very powerful. A human soul is able to reincarnate and go th…

I’ve toyed with that idea ever since that dream/obe.

I feel like I’ve been holding myself back. I used to be so fearless in lucid dreams and such. I don’t know what I’m scared of.

I’ve heard my name a few times in the last ten years or so in a raspy deep voice while awake.
Not threatening. I don’t have auditory schiztophrenia lol.

Another dream, I was standing in front of my dad in his room talking to him, and my dad picked up a camera and took a picture of me. The flash blinded me in the dream and then my head got funny. I felt that sinking sucking feeling you get before an obe, and I heard the same voice calling my name. I seriously spooked and forced myself awake before the obe could happen.

Once awake I was like… WTF. Like I wanted to punch myself I was like why the fuck did I spook?! That’s happened in a few different lucid or obe transition experiences and I don’t know why my subconscious is scared. I was never ever scared just a few years prior to now and especially as a kid.

That’s driving me crazy and now I’m working on willfull obe so I can find this thing and figure out wtf is up with me.

I think I might have a lead on my original topic…

One of my good friends is a Mambo Asogwe. I never thought to talk to her about this experience even though I should have. She randomly read my palm the other day when we were texting, like super random, and she said a lot of interesting things, but one of the interesting things she said is that she could see the eye of Horus on my finger. This made her feel as though I have a strong Egyptian history in my past lives, and that I would work naturally and easily with Egyptian deities… like once I get going and jump in, it will start to feel natural and I’ll have good connections and success.

So I started researching Horus… found out it’s very likely that Horus is also King Purson. So I’m planning to evoke him around this coming Scorpio full moon if I can. That made me think all of a sudden … what if that was an Egyptian entity in a mask? But… their masks were gorgeous, not scary looking.

I’ll update this thread or make a new one about my King Purson evocation experience once I do it of course. 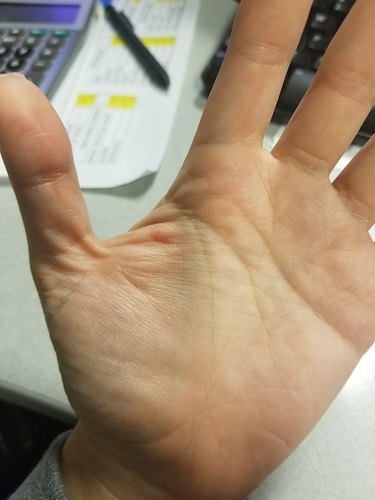 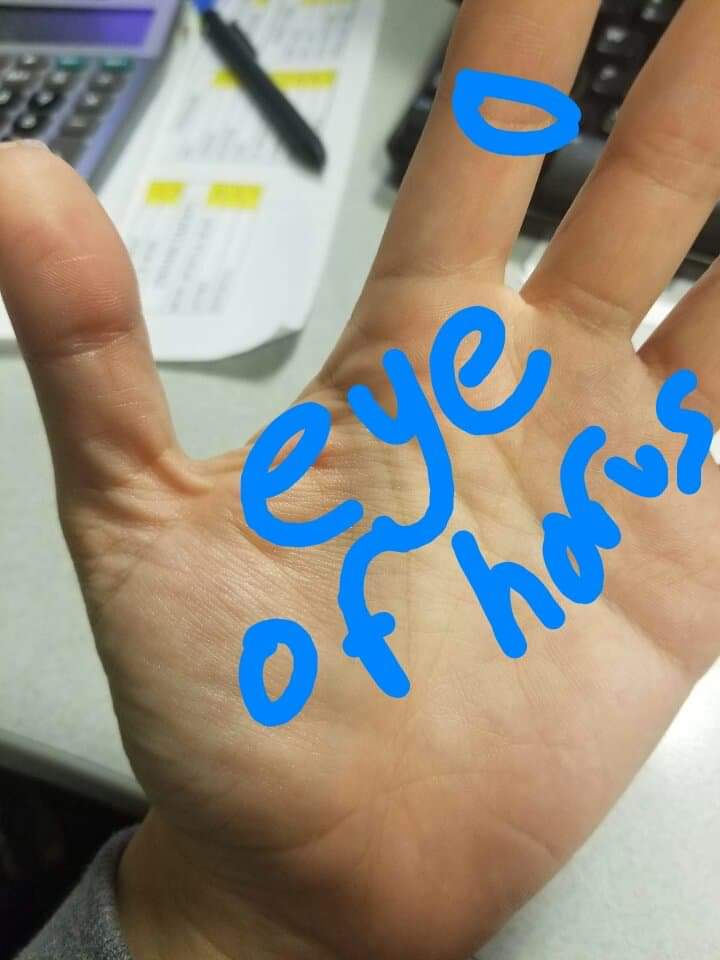 You see yourself wading through thick fog symbolizes troubles, confusion, worries and that changes are coming.

The dark figure going over a past life regression that you have past life memories you have forgotten. Seeing you as a baby, meaning he has been with you since birth. While this may sound impossible, you’ll quickly realize just how many memories you possibly have, leading to your current future and to show you what you must overcome to succeed or solve problems.

You must understand the mistakes you have made and the good experiences you have had in order to ensure future prosperity. The dark figure with a staff could be be a symbol of a number of deitys including Baal.

Your father is someone you trust with a camera it shows how we can look on events that have happened in the past. This dream is very much focused on learning from experiences. The bright flash by a camera is warning you of the impact your past may have on the near future.

This creature / entity from what I’ve experienced as well as read online and attempted to find in books is nothing more than an astral gate keeper. In my experience, they tend to show up when you dig to deep into your own unconscious mind / astral realm instead of projecting outward. Every time it has happened to me they’ve appeared as a shadow with a white mask and threw me back into my body instantly by screeching at me.

I’d definitely spend more time meditating on what you saw, and try to form your own opinion about it since visuals are generally related to the person who saw them unless it’s a shared vision.

Again though I could be wrong since I have no idea what you perceived visually when it happened to you other than a “closely related” image.

This sort of reminds me of when I was younger and would have spontaneous experiences like this where I’d have an entity that came to me in dreams or the astral…whichever, and would talk to me, give advice, show me things, etc. That’s still one of those things I’d like to figure out the answer to.

He was also known to be pretty dark

Unfortunately I have got no idea what this could have been.
I also had very similar experiences with a being like that when I was a child. No clue.

Thank you so much. I don’t even know how to thank you.

That was the weirdest damn video I think I’ve ever seen, but yes quite possibly, at the end.

You’re welcome! Glad it was helpful. Researching to learn everything you can about the spirit is the best next step Glad to see you’re doing it Please give updates on how working with him is progressing for you

Bowie was definitely a fellow magician into the occult but no one really knows how deep it went. We know he knew and practiced aspects of the kabalah and apparently he worked with Priapos towards the end of his life But I’m really curious what other spirits he may have worked with?

My research is inundated with massive penis

I had no idea that he is the penis god lolol.

Not too much I can find about his dark side or forms associated with a scarecrow.

Everything I’m coming across is generic and from Greek mythology. Still looking around.

I’m so sorry! I swear I wasn’t trying to prank you and get you to look up penis stuff

Try this if you haven’t already

Somehow that morphed and turned into today’s garden scarecrow

That’s really all I know about him Perhaps if you buy him a cute little scarecrow and try to work with him you might learn more from him and build up your own associations?

That is if the dongage doesn’t scare you away

It’s seriously okay I swear. My boyfriend jokes with me that I’m full of nothing but dick and butt jokes… maybe a few pewp jokes… but anyway… Let’s just say I’m totally vulgar as F.

And I think it’s actually, the funniest thing I’ve ever heard that he butt raped people for stealing vegetables

I’m dead, seriously. He’s totally my mentor and best friend. Thanks for pointing me in the right research direction lol.

Even if that wasn’t him I saw, I don’t care. Lol. I have to be friends with the butt raping veggie protector. Our dark sense of humor is riding the same wave lol

I’m getting some Azrael vibes from that picture.

I can see that I’ve always thought Azrael was cool

I tried opening Azraels sigil a while back but didn’t really get much from it.

I might be wrong but I figured I would definitely know if I found the right sigil.

Who knows he may not even have a sigil

If I could just figure out astral projection I could focus on the feeling I felt and possibly find him through that energy signature, but at this point I feel kinda defeated, like I’m never going to figure out controlled willfull AP. My psyche just kinda, spontaneously allows it when it wants.

He could be a servant of Azrael or otherwise connected to him.