I have an idea that can help me

I’m going to put vassago’s sigil under my pillow and see if he will teach me in my sleep. My last post was about me doing my first evocation. It was successful except for the fact that I couldn’t hear him. But he showed me he was there by lifing my arm and feeling a cold pocket of air. Hopefully we can talk in my sleep and actually be able to work with him. I will update in the morning.

Right on. Sometimes I take a bath in mugwort and nettle. The nettle is just for healthy skin and healthy hair, the mugwort however has been gifting me with fantastic experiences. I’ve been palling around an entity that calls itself Charlie. Seems like Ive spent weeks with Charlie. I currently have no sigils under my pillow, just a huge slab of selenite. If something wakes me up Im able to go right back to sleep and pick up where I left off. It seems so vivid it couldnt possibly be a dream. I can touch things and actually feel them. Its so very vivid.

Vassago is very kind I can’t wait to read your update.

Ooooooh boy do I have an update! I actually got to talk with him but I can’t remember what we talked about. It was a very subtle chat and didn’t have a direction but I do remember my surroundings. I was in a Sandy Oasis and I was standing about 5 feet from who I think is him. He was dark skinned and bald, he had some orange face paint on his face. I think we were in Africa? He was wearing a purple bagy robe. Idk if that was him or the form I imagined him in. But this isn’t the only thing that happened.

I had a dream that I was reliving a past memory. I was probably around 8 years old. My parents were still together. We were on vacation at the beach. I was playing in the water when I possesed myself? Sounds odd by it was like I highjacked my own memory and controled my body. After that the water pulled back into a massive wave. I ran and grabed a surf board out of a shack and ran into the water. I got sucked up into the wave and arrived out of the wave at the top. I’ve never surfed before, but I long board when I travel across my town. So I put it under my feet and went with it. I quickly learned and had a natural talent with the board. I look down and the wave is approaching the beach and my parents are just sitting there doing nothing even though a tsunami is gonna crash on them. While I’m surfing I look over and there are some amazing surfers and I’m just riding in awe. The wave continues and crashes on the entire beach then I wake up.

I have already decrypted this dream. Vassago is know for showing the past, so he obviously showed me the past. Me getting sucked onto the wave is my first introduction into magic and demonology. The wave represented magic and my journey with it. My natural talent to surf was my natural talent with magic(I didn’t know I had a natural talent with magic, my dad is a Christian and idk what my mom was but she would spread sage around the house and do that stuff, but I do know she was not Christan.) When I look over I see some great surfers and I realize I’m going to be up there with the best of the best. This is my best decryption of my dream feel free to try yourself and let me know what you think!

first time he appeared to me he was in a light green corduroy suit. he had pale skin and bright red hair lol He also had a glowing purple orb he was carrying around.

it’s weird how they appear to us all differently

@TheUmbra,since you suggested this idea I am going try it as well,am not sure which sigil would best for this,don’t want disrespect any spirit I’m contacting.

which one are you wanted to have contact with?
Here is a site with a list and their sigil’s
https://demonsanddemonolatry.com/category/knowndemons/

I recommend a evocation with the spirit. After that let a day pass and than ask if he will speak to you in your dreams.

Thanks noted. currently doing research on that spirit

I wish you luck! So far vassago has helped me alot with my spiritual development. I just got through a conversation with him while I was meditating. He told me to take his sigil out my journal and put it into my pocket and continue on my day. Im curious on what he a has in store for me. 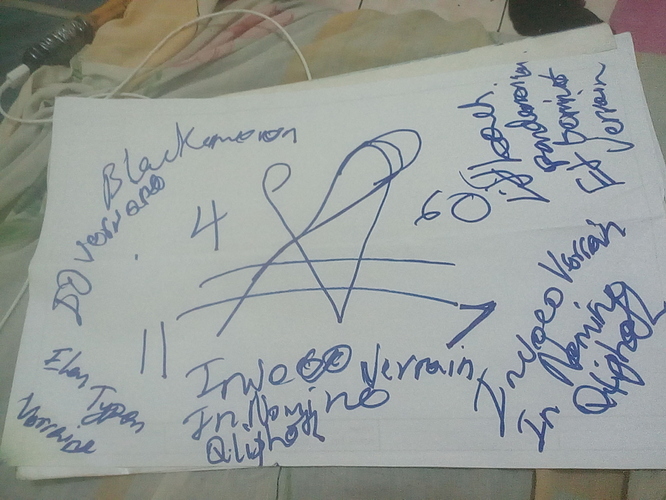 I’ve never seen anything like that! What is it?

I made a sigil with channeled numbers to the spirit,chants of intent(bad writing,chanting while writing),I do my sigils most time

I’ve never heard of doing it like that, but also some people just meditate on the name alone and get a response.

It was a method I got from V.k jehannum videos were you empower the sigil with chants, numbers,to make the sigil more effective but it all based on your magic power and will