How to summon yokai?

Well, I at first wondered if there was sigils at all for these Japanese entities, but good question. I would have to ask if there are sigils or ways of evoking Yuki-onna or Kitsune.
If you happen to know any yokai that can cause poltergeist activity, I may be interested as well.

I Would Like To Know How To Summon Kiko, Kitsune, Nekomata, Hachishakusama, Kuchisake-onna, and Yuki-onna.

You have to introduce yourself. How long have you practiced magic?

Hachishakusama ehh?
I wonder what kind of benefits one can gain from working with her??

My only question is why?

For starters you can create your own sigils for spirits or once you have the spirits in your grasp they can give you sigils for themselves, to call upon them themselves. You don’t even need sigils to call upon entities but they are useful when you are dealing with entities that hold titles that are passed down, or entities with various aspects or entities that might need to be “tamed” to put it nicely, hell you can even call a spirit up with simply a picture or name alone if you know what you’re doing.

Since we know that demons being bad is a Xtian myth, does that mean that the yokai might be helpful to us too?

Just because demons were portrayed as evil in christianity, and in reality they’re not, doesn’t mean there can’t be any malicious spirits out there.

And since yokai have nothing to do with all this, I’d be careful to transfer this mindset to them.
Japanese mythology was not influenced by christianity. (Shinto was heavily influenced by buddhism though, but that’s something else.)
Yokai is an umbrella term for all kinds of creatures, and some definitely won’t help humans.

I’d also keep my hands off urban legends like Hachishakusama (all she does is sentence you to die, nothing else, so why even bother). All you will gain from this is paranoia in my opinion.

Welcome @Philosopherx .You have to make an introduction. How long have you practiced magic?

That’s not how this works.

Yeah, go on folks, do it. Summon a oh so cute Yokai, maybe she will be your waifu, hm? Only christians believe spirits can be evil so in reality all they want is to suck your dick, right? (Or your spiritual ascent, but, isn’t that almost the same?)
Do it, summon them. And then see for yourself.

I honestly cannot think of a yokai that would bring love. I believe requests like that would fall into the Kami territory, or one of the buddhist deities brought to Japan. While there are Yokai that are credited to jumping into bed with humans, it is usually a method so they may eat the human.

To date, I have only had experience with a Jorōgumo and one of the lessons I learned from her was how to better manipulate others better, through whatever means available.

To date, I have only had experience with a Jorōgumo

I like to believe I have made a good impression on some kami when I spent time in Tokyo because I used to hang out at the Sensouji temple in Asakusa a lot, and it has this little garden with lots of small Hokora shrines. One day I saw a big fat westerner sitting on the steps to a Hokora shrine, reading his newspaper. The passers-by wanted to pray to the shrine and were forced to pray into that guy’s direction, but japanese people are too polite to say anything, so I went up to that guy and informed him in my politest tone that this is a religious site and it’s not ok to sit there. He only answered “Are you japanese?” And continued reading his newspaper.
A few moments later his wife came along with their japanese tour guide and I went straight to the guide and asked her in japanese (right in front of the fat guy so he could see) if it is ok to sit there and she said absolutely not, but she can’t tell him because he’s her customer.
She looked at me in a distressed way and then I said I told him.
She then got them to follow her to some other location.

Kami of that shrine, remember me please!

I have experience with some yokai from aril us kitsune, tengu, bankeneko, nekomata, various Oni, and some inugami dogs.

Kami of that shrine,

Correct me if I am wrong but would the Kami for that temple be Ebisu/Hiruko? God of fisherman and luck?

The Sensouji legend has something to do with fishermen, yes. But it was not the steps of the sensouji, but one ofbthe many Hokora Shrines, which are dedicated to different local Kami.

Ah, found the pic I made, this was the hokora shrine: 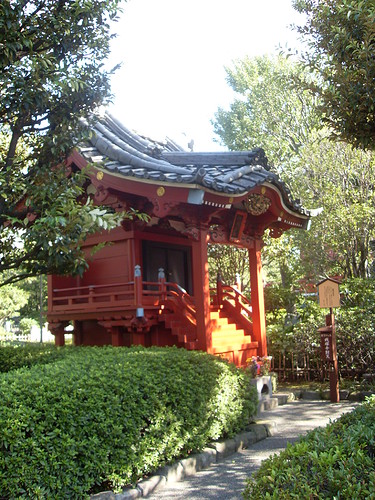 Nice, that is a beautiful shrine. I am hoping to one day make it to Kyoto, as there are some temples I would like to visit.