How to interpret this?

Hey ! I was doing a reading on my success on the powerlifting competition on saturday . Here are the cards i draw . I am not 100% sure how to interpret it , i am a beginner .
Thanks in advance ! 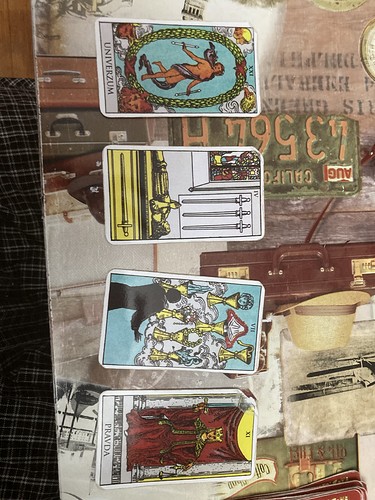 if you did a spread, it would tell you. Honestly, what question did you ask? IT’s looking like a progression

crap, just read the post again, let me give it my best shot.

This is really unclear, to be honest, but if the contest is in the future;

You’re gonna feel great doing it, flaunting you stuff and feeling a little smug, or maybe not on the “flaunting your stuff part”. I feel, at least, this contest will be some sort of success, After that you’ll be so damn tired that you’ll have to slow down on your training and life for a bit. It’s best you did that anyways, The World energy can be overzealous with it’s celebration.

Also, as some advice, don’t over judge or overestimate anything. IT’s best you don’t form opinions during the event, so yeah.

Try not to get worried about the details? Moving forward, there might be some serious anxiety in the space. While you’re doing it, just focus on what YOU’RE doing and then it’s all good.

Thanks for the help ! The question was about the su success on my powerlifting competition on saturday , so IT will v.d future . I did IT without a spread , i felt like that . I sensed anxiety too .

IT will be in the future *

yeah just keep an eye out for the overthinking

The world card means you are prepared.
4 of swords means you need to rest well before the completion.
7 of cups is your hopes and choices. It can be a wish fulfillment card or delusions so it depends on how realistic you are with your choices.
The justice means you will be judged fairly so the outcome will be based on your efforts.

Seems to me it depends on you than the competition or the other participants.