How to get rid of a psychic link?

I would link to get rid of a psychic link to someone from an old relationship. I have done everything I can think of, professional help, rituals, prayers for years… and I still feel a strong connection and emotional influence by this person even though there has been no form of contact or communication for almost 7 years now!

I really want to move on with my life but this is in my heart even though I know it’s bad for me. I am out of ideas! Can someone give me some advice?!

Are you doing these things you’ve tried consistently? There’s a reason why we call them rituals.

I think you need to do some soul searching, looking at your emotions why you want to stay attached to this person. I think there is a chance you might be sabotaging yourself.

What helped very wel for me, was sit down, relaxed and then speak:
“I want that all energy and energetic ties to [name of person here] disappear from me and my house”

This is something that came to me intuitively and I fine-tuned with my pendulum. I had to repeat it 8 times a day (and really mean it when you say it), 5 days in a row. It worked miracles for my wife, daughter and myself. We instantly saw changes (as this person was very evil towards us and had sent us many curses).

While saying it, emotions might release, like grief… Because to really let someone go you have to accept the grief, the “mourning”. If that doesn’t happen, then try and find a way to help those emotions let go. Chi Kungs might help, or special therapies to help emotions surface.

I used my pendulum to fine tune the number of times a day, and the number of days in a row. So in your case it might be different.

Some things I have done was once like getting rid of things that remind me of them, although it was not clear that I had to do that repetitively. But prayers and asking Archangel Michael to pull cords have been a couple times a month, for years.

I keep receiving images and emotions from them which sometimes confuses me.

I will try this, thank you. I have grieved and forgiven and had a lot of emotions come up over the years.

A therapist suggested I might have a trauma bond which is possible, but he was not helpful for me to heal from this.

OK… Sounds good. Give it a try and see if it helps, and perhaps releases more emotions.

It doesn’t really seem that the person you want to let go is sabotaging the letting-go-process as he/she hasn’t contacted you for 7 years, but perhaps he/she is. In that case, you might consider asking demonslayer on fiverr (search for demonslayer on the site and then select “I will remove all demonic forces off your loved ones”) for help. Had some really good results working with her, and I’m sure she can instantly see if this person is trying to energetically stay connected with you (and perhaps using spells to accomplish this).

I think you’re right about the self sabotage. I know I have problems with sabotaging myself.

The most helpful thing was treating it like an addiction but it is still so unsettling as the thoughts and emotions feel like they invade me when I am having fun or feeling relaxed. I don’t try to think about them, but it still happens.

Thank you I have always wondered if there was something occult going on as this is the only person this happens to me with, except for family members.

I wasn’t sure if there was a way to find out if someone is using magick on me.

I would call on AA Michael to cut the links between you and the other person.

There is a good book on the topic of severing ties/psychic links (AKA cords) between yourself and others. It’s called Energy Strands by Denise Linn.

Since I work with sigils now, I would suggest using those. I’d combine Release, Banishment, Warding, and Death to do so. Using Death in the way of “bringing an end to a chapter” not the “drop dead dammit” kind of way

Thank you, which sigils do you recommend using? Or is it sigils you make?

Thank you for the book recommendation! I will look it up now

I personally use these ones 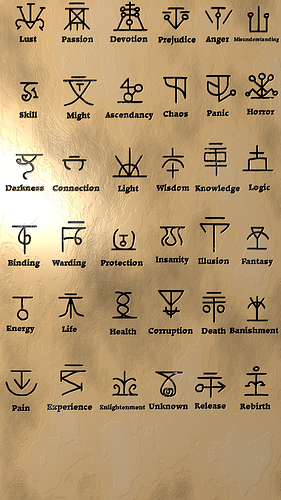 But its really up to you which you use

Also, had another thought: What might help a lot, is developing the skill to differentiate accurately between your own thoughts and feelings and the feelings/thoughts that others send/project on you.

At some point I discovered a pattern in when I would suddenly feel aroused out of nothing, mostly in the morning hours in bed. I somehow was able to get a quite accurate log on when my ex-girlfriend would wake up in the morning (through her facebook or whatever, don’t remember exact details), and I discovered an exact match with those times and the timing of those feelings. So, in the morning she was sending sexual energy to me, and visualised having sex with me. We had broken up a few months before, so the cord/connection was still quite strong.

I also noticed that the feeling came totally unexpected, without me thinking anything sexual or anything related to her. A few years later, I had a very interesting experience with another ex-girlfriend with whom I had broken up a few months before, so still quite fresh. I was sitting on the bench, watching TV, and all of a sudden I felt strong sexual arousement, and I knew it came from without myself. 2 minutes later the ex calls me, and after some chit-chat offers to pass by my house. I politely told her, “better not”, and then had the guts to ask her if was thinking of me in a sexual way the few minutes before she called. And she hesitantly admitted it. For those wondering, I said “no” to her offer because she had broken up with me, exactly when we became more emotionally connected, more intimate, so I knew this would be just a sex night and nothing more, which to me doesn’t feel good, and I prefer to take the time to emotionally process the breaking up of relation, and in that period have virtually no contact with the ex. Taking time to break the cords/connections. Having after-break-up sex doesn’t help at all

So, since then, I know very accurately when a feeling or thought comes from within or from without.

So, perhaps you can meditate a bit, or analyse the moments when you suddenly think of or have feelings w.r.t. your ex/friend? And try to find out if it comes from within or without. Has proven helpful many, many times.

That could help a lot in finding out what’s going on. Good luck!

This is helpful, thank you. I wasn’t finding the sigils anywhere on the internet

Honestly I had to do A LOT of searching to find them. I will tell you that the blood versions of them work without consent, on anything

What do you mean blood versions? Drawing the sigils in my blood?

Yes. Theyre intended to be used regularly, but I use them for blood magick. I dont suggest doing it without experience because you will cause some issues