How to find out, who cursed my mother?

Hey, I need some help. Today my mother talked to a healer. I don’t know, how this guy works, but he has a large track record of confirmed medical diagnosis and also healing results. And because I helped his family before, he is going to work with my mother for free. What’s why I think, that the guy is real and I also trust in his work.

Today my mother has her “diagnosis” session. He told her some issues. Nothing bad - right now. And he will work with her. BUT: He also told her, that about 3-4 years ago, some one from the family put a death curse on her.

The doctors were astonished, how resistent the cancer was. Because normally it’s just a session of 4-6 doses Chemotherapy and the cancer is gone for ever.

Now I understand, why the cancer was so resistent.

The healer told my mom, that he is going to take care of hear health. But I also want to know, who did this. What spirit can I work with to get this information?

And to be clear, my aunt died herself on cancer almost 2 years ago.

I might recommend Vassago, of the Goetic demons. He is said to be able to make hidden information come to light. However, I am sure there are many other methods and other people might have better recommendations. For instance, you could simply strongly focus on having the information revealed to you in a dream, and hold this thought in mind as you fall asleep. The information may come to you in a dream, or in other unexpected ways.

I am sorry about your mum and auntie by the way. All the best.

She had a fight with my aunt. My aunt was disabled, either physically and also mentally. She lived in my house. And during this fight, she told my mom, that she wish her to die. Is this enough for such a curse? But on the other hand, my mom was already ill at that time.

Well, keep in mind that if your aunt verbalized it, there’s a good chance she was thinking about it long before she reached a boiling point and decided to vocalize it. And the mere thought, charged with enough emotion, can certainly cause damage. Reminds me of a story posted on here by an old user named @ZachD555 who basically killed a guy who worked at a club, simply by looking at him and vocalizing his intent. So its quite possible that your mothers attacker is already dead.

So its quite possible that your mothers attacker is already dead.

This seems to be highly possible.
@LL0rd if you’d like I could give you a card reading, so you can collect some clues about the “who” and maybe “why”

It might help you to find a point to start with.

if you’d like I could give you a card reading, so you can collect some clues about the “who” and maybe “why”

Hey @LL0rd, following an instinct I have already finished a card spread about it (since I will be busy the next couple of days and might not find the time to do so if asked later). Just tell me if you’d like to receive this reading (like, at all) and if so, if I should just drop it in this thread or if you need it via PM

Until then take care!

Andromalius is the name that came to mind when I was reading this post.

The Seventy-second Spirit in Order is named Andromalius. He is an Earl, Great and Mighty, appearing in the Form of a Man holding a Great Serpent in his Hand. His Office is to bring back both a Thief, and the Goods which are stolen, and to discover all Wickedness, and Underhand Dealing, and to punish all Thieves and other Wicked People, and to discover Treasures that be Hid. He ruleth over 36 Legions of Spirits.

“The goods that are stolen” somebody stole your mother’s health. “Wickedness, and underhanded dealing”, “and other wicked people” if that doesn’t describe the person that cursed your mother, then I don’t know what does.

According to Michael Ford’s, Luciferian Goetia (2007):

I couldn’t have said it any better.

I hope this helps. You have my condolences. I lost my mother back in May 2020. I’m still grieving.

Hey, thank you. Please just drop it here. I think, it might be helpful with my further work. And might also help others - somehow.

Alright, this is what I got when I asked “Who cursed LL0rds mother and why?” (click on the photo to zoom into the cards, if you like 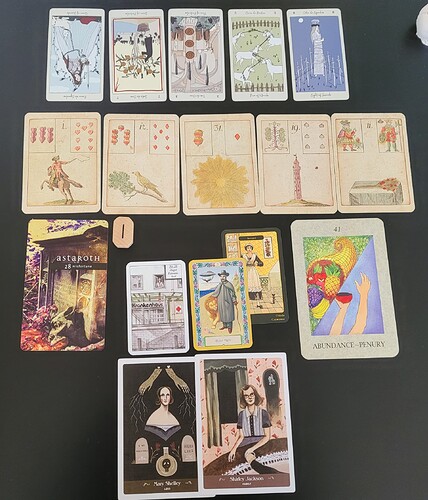 20220828_1035581920×2238 418 KB
Okay, I’d like to emphasize that I did not ask “Was LL0rds aunt subconsciously involved in the curse?”, yet the two Oracle cards of “Loss”/“Death” and “Family” (which includes the dark aspects of a family, too) came out together. It certainly looks like influence from beyond the grave of a family member to me from these cards alone and I drew them at the end of the reading.I drew the Isa Rune in Merkstave, which stands for mental blocks, blindness, illusion and death.

Lets dig into the details.
It is noticeable that the first card of the reading is the Queen of Swords in reverse. In that position it points towards a person who has become bitter and resentful and who lost the ability to make objective decisions (=someone who acts and thinks from the source of emotion alone, without evaluating the situation at hand with reason and discernment). The Eight of Swords emphasizes on the bitterness of this person: someone has fallen victim to a sort of paralyzing helplessness within their own head. A victim role, so to speak, without the ability to break free from this mental blindfold. The Isa Rune in Merkstave adds to this description, as well.

The Seven of Pentacles in reverse together with the Abundance/Penury card tells me about someone who lost a source of income or a financial stability, which adds to the feeling of bitterness and helplessness.

Three of Pentacles in reverse and the Five of Wands are giving away clues that this person must have had the impression that everything in between them and your mother is some sort of competition and they might have felt undermined by your mother at some point (see Abundance/Penury!), resulting in conflicts and arguments because if this assumption.

The Astaroth card “Misfortune” indicates a feeling of “no matter what I am doing, everything falls apart, everything fails”, which adds to the bitterness of the reversed Queen of Swords, making the blindfold from the Eight of Swords heavier and denser over time.

The Rider, the Birds and the Sun cards are telling me about certain kind of conversations between your mother and this person from the past that must have circled in that persons head around, adding to their worries. This person must have felt really alone or like a cast-out over time, the Sun, the Tower and the Whip are pointing towards a deep feeling of isolation and as if someone is giving them the “cold shoulder” as a punishment. (Isa Rune = Ice)

Interestingly enough we come across the Kipper Card 29, which is a symbol for captivity (like the Tower can be a symbol of captivity). The card even reads Angst/Einsamkeit (Fear/Loneliness) and depicts a hospital. This card is an indicator that this person has trapped themselves in their own head with all of that paralyzing fear (Eight of Swords, again!).

Apparently, someone would be able to help this situation: I drew the Guter Herr (Good Gentleman) card and the Servant. A male person with a lot of life experience and with no intentions to seek his own material benefit from it (like a priest or another kind of “spiritual servant”, if you get the idea) should be able to either lift this curse or to weaken it.

The person who cursed your mother was acting out of strong emotions and hurt and didn’t intend to cause such harm. The Queen of Swords in reverse is holding a severed head in her hands, she has “taken down” someone with her on impulse and not because of plotting.

I hope this is helping to figure out the cause of this situation. Let me know if you have questions about the reading

Thank your for the reading. Sorry, I was so impressed by the details, that I wasn’t able to thank you yesterday! Nearly every single detail line up with the reality and what happened before. Thank you very much for your work! It will help me / us very much! Is there anything I can do for you?

Thanks for your feedback, I wish your mother all the best

Is there anything I can do for you?

AUNS (or AMY from the Goetia) - To detect whether another person is working magick against you, or to influence you, and to identify that person through intuition.

WOW… I was just standing for half an hour on the balcony, fighting the idea, just to jump down…

Is Ignorance a Bliss?

Today I had a session with the healer, who was already working with my mother. Without knowing much about me, he told me, that there is also a curse on me. But a different one. This curse is about “the ring”. The purpose of the curse is, that I don’t find a partner / wife. He is going to work on the curse in our next session. Some kind of cleaning session.

The last days, I was preparing a ritual, to ask Andromalius to reveal, who cursed my mother. So I changed the question and asked Andromalius, who cursed both of us and why.

The Answer was not just a name and the reason. The answer was the whole family story. What every single family member was wanting. Why my grandmother got cancer. Why she was told to stop taking the medicine, I gave her and take another one. Why she died… Why my grandfather was lying in bed for 4 years with intense pain. And a lot of more things…

Why was I so blind? For me, my family was perfect. Before everything broke down. And why? Because of me… It’s not my fault, but I was in the middle of the conflict. And I didn’t even realized this.