How feels the presence of the archangels

Yesterday i did my first invocation in a long time.I called forth the elements for protection and then i called the name of the four archangels.Michael,Gabriel,Raphael and Uriel I feelt first nothing and then i feelt scared and thought what ever i do i can beter not go outside the cirkel.I then feelt if my back was on fire.the candle flames were still and dont moved the flames changed colour and was now blue.

Does anybody know if it were the archangels?

Michael feels like fire, his presence can be pretty intense.

If I compare how their light feels to me, Michael is like a hot burning sun, and Raphael is darker, more like the moonshine. I haven’t worked with Gabriel and Uriel.

Indeed it may have been Michael, blue suggests water or air (so Gabriel and Raphael too), but there are blue flames… To be more sure it’s possible to use their sigils, although maybe you did so.

It could be the archangels or it may not be…
Perhaps try tuning into the angels in a different way such as sigil gazing, calm your mind draw the sigil on paper and connect! My advice is that you should cleanse your working area before you do start to connect as it can be confusing. 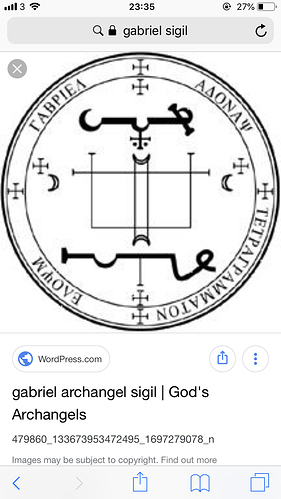 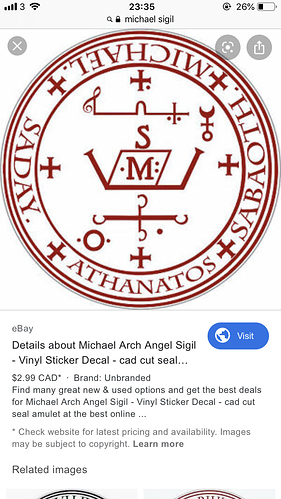 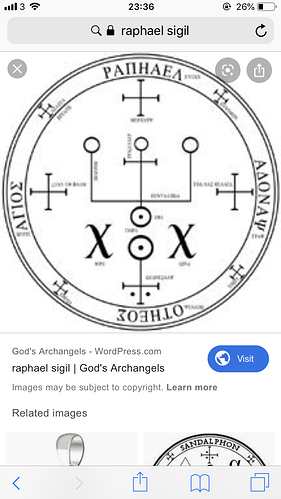 Thank you for the Sigil i will try Sigil gazing one question how must you cleanse a room?

Thank you for the answer Helena.i remember something that also happend with the invocation.I saw before the heat came a gold light.
And it say we are here but not truly here,we can be everywere.i asked what it means he say,we are the balance of the universe.

To cleanse a room is getting rid of any energy’s that may effect you negatively or stagnant energy that no longer serves you. There are many ways to cleanse…

The Lesser Banishing Ritual of the Pentagram

Composed from various sources related to the

Hermetic Order of the Golden Dawn

Take a steel dagger in the right hand (or use the index finger). Face EAST.

Perform the Cabbalistic Cross as follows:

Imagine, at the first word intoned, a brilliant white light descend from above.

Touch the forehead and vibrate ATEH (thou art)

Imagine that same brilliant white light form a 6 inch diameter sphere just above the crown of your head.

Touch the middle of the solar plexus and vibrate MALKUTH (Kingdom)

Imagine a shaft of light descending from the Crown Sphere and descend to the feet where another 6 inch sphere expands just under your feet.

Touch the right shoulder and vibrate VE-GEVURAH (and Power)

Imagine a 6 inch sphere of brilliant white light appear just next to the right shoulder.

Touch the left shoulder and vibrate VE-GEDULAH (and Glory)

Imagine a shaft of light emerge from the right Sphere and cross your breast to expand and form another Sphere at your left shoulder.

Clasp the hands before you and vibrate LE-OLAHM (for ever)

At this point imagine clearly the cross of light as it extends through your body.

Hands as before, with the dagger between fingers, point up, vibrate AMEN

Note : Any image or figure traced in the air with the finger, dagger or other magical instrument, is to be imagined in brilliant scintillating white Light. In more advanced working, other colors may be used. Make sure that all images drawn are correct, as brilliant as possible, and complete. The beginning and end of a drawn Pentagram must come completely together.

Draw, in the air facing EAST, a banishing Earth Pentagram as shown in the diagram, and bringing the point of the dagger to the center of the Pentagram, vibrate the Name Y H V H (pronounced YAHD HEY VAU HEY )

Imagine that your voice carries forward to the LIMITS of the UNIVERSE.

Without moving the dagger in any other direction, trace a semicircle before you as you turn toward the SOUTH. Again trace the Pentagram, bring the dagger to the center of it, and vibrate the Name ADNI , (pronounced AH-DOH-NEYE )

Then, turn towards the NORTH, while tracing the circle, trace the Pentagram, bring the point of the dagger to the center and vibrate the Name AGLA , (pronounced either AH-GAH-LAH or ATAH GIBOR LE-OLAHM ADONAI )

Return to the EAST, completing tracing the circle of brilliant white Light, bringing the dagger point to the center of the EAST Pentagram.

Extend the arms in the form of a cross, say: BEFORE ME (then vibrate) RAPHAEL (pronounced RAH-PHYE-EHL )

Imagine a scintillating brilliant white Archangel in front of you and facing you. In his/her right hand is a magical Sword held with the point upright. The background is a pale, pure, bright yellow. Cherubs can be imagined near the Archangel. Imagine a gentle, refreshing breeze, cleansing and purifying the air.

Then, say: BEHIND ME (then vibrate) GABRIEL (pronounced GAH-BREE-EHL )

Imagine a scintillating brilliant white Archangel behind you and facing you, holding in their right hand an exquisite silver Chalice. He/she is standing on a Cerulean-blue ocean and dolphins or mermaids are nearby. Imagine feeling the mist and cool spray of the ocean breeze.

Then, say: AT MY RIGHT HAND (then vibrate) MICHAEL (pronounced MEE-CHYE-EHL )

Imagine a scintillating brilliant white Archangel at your right, facing you, and holding in their right hand a transparent scarlet red Wand with a scintillate pure diamond top. Waves of scarlet, red-orange and orange fire in the background. Also, SEKHMET, with a scarlet disk above her head, emerald green Uraeus, scarlet dress from just below breasts, tight-fitting, down to her ankles, is in the flames. She holds, in her left hand, a scarlet-red lotus wand. In her right hand, she holds an emerald-green ankh. Small black salamanders can be seen moving among the flames. Imagine you feel the heat and power emanating from the SOUTH.

Then, say: AT MY LEFT HAND (then vibrate) AURIEL (pronounced AWE-REE-EHL )

Imagine a scintillating brilliant white Archangel at your left, facing you, and holding between their hands a Disk with a scintillating white Pentagram in the center. The ground is russet-brown, the leaves of the trees are olive-green, there are black shadows from the trees in a number of places, and the light is citrine (light yellow-green.) Feel the solidity of the Earth, and imagine the odor of the leaves and muskiness of the ground.

Now, say: ABOUT ME FLAMES THE PENTAGRAMS, AND IN THE COLUMN SHINES THE SIX-RAYED STAR.

Imagine the complete circle of brilliant white light at whose quadrants are the 4 Pentagrams. At the center is the Cabbalistic Cross of Light extended through one’s body.

Note: The subject of the vibration of Names of Power is discussed at length in other sources. The Names should be pronounced inwardly in the breath, vibrating it as much as possible and feeling that the whole body throbs with the sound and sends out a wave of vibration directed to the ends of the Earth, according to Regardie. Time and continuous practice of the Ritual, once in the morning prior to the Invoking Ritual, and once in the evening are standard recommendations, and will produce the desired result. There is no particular frequency or degree of volume that is suitable for every individual. Each person must practice to find the resonant vibration that will work for him/her. Some benefit can be obtained by listening to the chants of Tibetan Monks that can be found on cassette and CD. Other occultists assert that definite somatic effects will manifest when the vibrated Names are performed correctly, such as tingling in certain areas of the body. I believe it is important to vibrate the Names at the same time one imagines the Name in scintillate white Light, rushing upward thru the body and outwards toward the end of the Universe in the particular direction one is working with. It is important to pronounce the Names correctly and clearly and, according to Traditional Jewish sources, never pronounce the Names casually, but only in Holy or Theurgic Work. One is admonished to NEVER lower the hand or Magical Instrument while tracing the Circle or at any other time, unless specifically instructed to do so.

Thank you for the information i will use this first before invocation.

Do you know what a gold light its before i feelt a presence.and sinds i did that invocation i see black shadows and then white shadows and hear the name Oriel,Raziel,ramaela and abraxiel
I am scared i dont know what it is my pet looks at it and follow it with his head.
It,s it dangerious🤷🏼‍♀️

The light can be a sign of their presence too.
Archangels aren’t always easy to understand and in my experience they seem to like talking in riddles

When I do an invocation/evocation I call the elements for protection too. After the ritual I cleanse the room of all lesser energies that may have come. I command all energies/entities which I didn’t call to leave this place peacefully and go home to where they belong.

And it say we are here but not truly here,we can be everywere.i

I get these “yes and no” - answers too. I feel like they want me to think deeper about everything, to discover the truth.

It is also advised that you test the entity’s you summon, as imposter spirits may Imitate the angel.

How can i test the entity?

There is no need to “test” the spirits if you are using good ritual methods, as the formulas in the sigils, words of power, and images will make it so that no other spirit could be called.

Might I also suggest that you look into Archangels of Magick by Damon Brand? The author states that the group he works with have found that, for working with archangels, it is best to use their names written in Hebrew, rather than any of the sigils you may find online. This is presumably how the ancients performed the magick, and according to the authors is what has yielded the best results for them.

There are also accurate and helpful descriptions of the spirits’ powers in the book, along with rituals of varying levels of complexity, from simple sigil magick to full evocation. Each of these rituals use different styles of sigils, and the invocations and evocations make use of secret names and imagery sourced from the old source texts, as well as private collections.

Not to sell out too hard here, but for working with the archangels, I know of no better way. I realize that it can be challenging for some to read an entire book and work with the instructions presented therein, and if that is the case then perhaps magick is just not for you. If you would like the secret angels of the universe to hear your call and reshape the very fabric of reality according to your wishes, it will require education and practice. I would think this a meagre price to pay for such power and knowledge.

True, but I think it’s better to test anyway just to be on the safe side. There have been convincing fakes in the past.