How Could I Force an Entity into an Object?

Hello everyone. I would love to poke your brains on a project I’m working on!

There was an old entity, demon, spirit thingy I used to talk to when I was younger. When talking to my dad a little bit ago he told me of the entity and some problems that arose from my first encounter with it, I never knew this happened until he told me about it. My father told me when I was around 2 or 3 back in my house in Puerto Rico I drew this large black figure with a long red serpent-like tongue in quite high detail which of course is very strange for being so young. There were more things happening in the background like plates falling, the faucet turning itself on and off, and things of the sort. It ended up with our house being blessed by a local church and later on us moving out of the house because of my younger brother being born.

When I heard this I really wanted to see if I could bring it to me and maybe even capture it. I want to talk to it and keep it nearby, mostly for personal reasons. My current plan is to try and invoke this entity and force it into an object, specifically an old silver necklace. I asked my bud for advice on this but he didn’t want to involve me in something so “dangerous”. He advised that I stay away from an entity I know nothing about and to stick to something not so risky and stupid. So I’d like to hear your guys’ ideas and learn a bit. Specifically I need to learn on invoking an entity based on suppressed thoughts (Or any other method that would help summon a specific entity) and how to capture it and bind it onto an object.

Thanks in advance, can’t wait to hear for you all!

Why instead of trying to aprisionate it, you don’t start a healthy relationship?

I don’t know why but I don’t feel right having a relationship with it. I feel it would be better for me to just imprison the thing.

So your telling me that you want to bring a entity you know nothing about, back into your life? With the possibility of storing it in a object. This shit isn’t pokemon my friend. But you have guts, I’ll give ya that.

I’m not all to experienced in this sort of thing but unless you are a badass with magick or have a higher level entity on your side, I highly doubt your capable of storing a spiritual being into a necklace. Wether you find a method of doing so or not. Especially if it was able to effect the physical world by moving plates and turning faucets on and off, there’s no telling what else it may be capable of doing.

Are you just wanting to imprison this thing cause it boosts your ego somehow? Or is there another reason. Do tell.

Haha, to be honest I’m not really sure. Hearing that I had a connection to something “supernatural” when I was young really excites me, like a lot. I know it’s somewhat dangerous invoking an unknown entity and utilizing it as such but I really want to. I don’t know why I want to “bind it” but it’s something I feel like I need to do. I don’t do these things to boost my ego, to become stronger, or anything of the sort. It’s the thrill and the unknown aspects of doing these things that make me want to do it.

I really would like to know why it decided to interact with me. Maybe get some answers to some other questions and find some things out about itself. It would be pretty exciting to talk to something unknown and having it beside you forever.

Heh. The thrill, the excitement. Curiosity. Ah, you remind me of myself. Welp, I hope you find something to help ya with this project of yours. There might be something on the forum you could use but I don’t know. If you do manage to trap this thing in a necklace, do post about it.

Id love to hear about the experiences you have with it. Just be careful.

Of course! I’m pretty sure the thing won’t be too happy being forced into an object, so I’ll try not to die while I do it lolol.

You have to find it’s name and corresponding sigil. Demons have corresponding metals and in order to trap the demon you must have a brass box. you need a Scrying circular mirror in a Triangle. You need to invoke arc angels to protect you before you do this 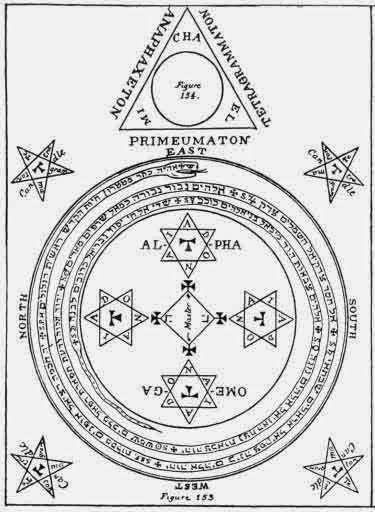 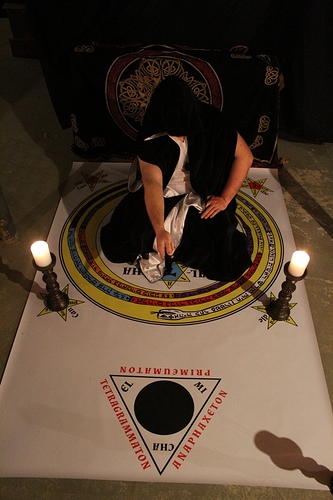 This is incredibly interesting! I love the look of the circle and the ritual itself. Where did you find this, I would enjoy doing some independent research on the subject. Also, could I alter the ritual to utilize a piece of jewelry instead of a box?

That’s from the Goetia. The book of The lesser key of Solomon.

You trap it in its corresponding metal With its sigil engraved into it and then you put that sigil in the brass box, have you heard of the myth of Pandora’s box. If you want read the lesser keys of Solomon

That is pretty neat! I’ll be sure to check it out when I can :>

Oh, alright! This helps a lot, thank you very much for the information. Binding is going to be much easier than I thought it would be. Thought I might have to sacrifice something lol

It’s very dangerous and if you don’t invoke the arc angels to protect you that demon will be back in your house feeding off your family’s fear.

I’ll find a way to summon the angels you speak of and take some extra precautionary measures. I’ll make sure my family and I aren’t harmed in any way.

Here is a documentary about the ritual when it comes to astarte https://youtu.be/vpV7wfwMIiE

I’ve just started watching little bit of it and the video already shows some promise. I’ll watch over the entire thing and take some notes here and there. I’m sure this’ll be an amazing resource! You sure have a lot of them on hand, very convenient for me as I get to learn more and more!!

It’s very powerful stuff; if you’re a beginner I’d work on self initiation by seeking out your shadow self and merging with it to strengthen your Intuition, Inspiration, divination ability’s.

“Shadow Self”? That seems pretty neat, I’ll do some research on that and find out how to do such a task. If it would make me more magickally adept then I’ll give it a shot. I pretty much need this to work so any boost will help!

, I highly doubt your capable of storing a spiritual being into a necklace.