How conceal/hide my home from outsiders except for family members?

I need steps, precise steps or rituals. I want to hide my home physically, mentally & spiritualy from all except my chosen family members

Are we talking spiritually, physically, energetically or some combination of all? I ask because what you are going to want to do will vary based on what you are hiding from and what you are trying to hide.

Also what traditions of magic you subscribe to may play in here too.

I have often read of things like places bay leaves in each corner of the home or room to hide yourself from unwanted spiritual presence’s while operating- but there’s a whole score of things you could do, layer up or even completely design based on other invisibility rituals and entities to accomplish at least part of this.

If you just want to pick and choose as you go, you might create a servitor or work with an entity. Over obscuring yourself might make it so your love interest forgets you exist and your child loses their friends or any number of unwanted things if you are not somewhat precise here.

A combination of all

I prefer the Hebrew & Vedic traditions of Magick

I did a generic google search of both, to see what popped up first.

As I suspected, this is still going to take some research from you to determine what will work for you and which things to put together.

I also immediately thought of Gallery of Magick’s books- most of them use Hebrew in some way, and I am pretty sure I’ve seen angels, that can hide what you are doing, or keep your intentions secret as well of course demons from the goetia and other entities like gods, which could be related to Hebrew magic as well depending on what you subscribe to as far as beliefs go more specifically.

I also thought of the 72 names of god- I believe these are Hebrew and each one can invoke a different quality so that is probably one way to go, as well as psalm magic or taking other traditional bible verses to hide one from their enemies.

I think my biggest suggestion still falls outside of either category though, and is going to be Genie Magick Unleashed, a book with multiple rituals using Genius spirits. I believe the main sigil for all rituals does contain some Hebrew but I won’t swear to it without running downstairs to grab my copy.

I recommend this book because parts of multiple rituals have to do with hiding your intentions and desires from anyone who would harm or want to harm your prosperity/life etc- almost every ritual covers some aspect of this, so I think it would be valuable to add to whatever other approaches you take.

The rituals are set up almost exactly like Damon Brand’s Master protection ritual, but it covers all aspects of life, ascension and becoming successful in everything, while offering protecting to prevent all of the aspects of life that need it, from falling apart or being harmed, or even seen in many cases. 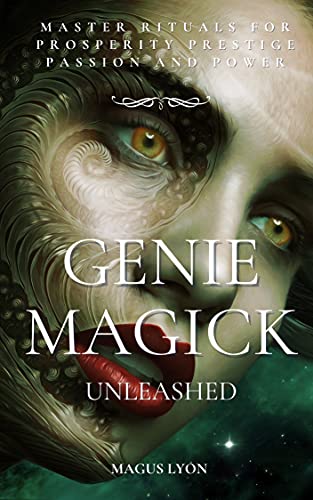 Shared via Kindle. Description: There are eleven extraordinary rituals in this book. I have approached them from a perspective that will prove useful to both advanced practitioner and beginner alike. This is a practical grimoire specifically created...

I also have found Ranzael, Legion and Baal to be useful in completely disguising some works of magic- to the point that when I told friends what I did, they acted like I didn’t say anything, multiple times and kept stuck on what their idea of what happened was- they were convinced they knew who the working when it was actually me.

That was actually above and beyond what I wanted, (I really just didn’t want my target to know it was me) but in the long run it makes way more sense to me than if this particular working had been selectively invisible.

To be honest, it’s not really THAT important which tradition it is for me. As long as it WORKS, that’s what matters the most. Feel free to suggest me anything and thank you

Is there a pdf version for the book?

Is there a pdf version for the book?

I have no idea, and would not be able to share it even if I could find it due to copyright laws, sorry

As long as it WORKS, that’s what matters the most. Feel free to suggest me anything and thank you

Then I would take a layered approach, working with this book to cover most cases and choose an entity or create a servitor to plug any holes I found in the system, as well as taking form folk magic the things you can do around the home like the bay leaves I mentioned and witches bottles and so on and so forth.

I would basically build a program based on all that I have learned personally and develop a ritual for myself to employ if its a single circumstance, and if it’s something needed long term, I’d still probably use the folk magic types of things, combined with the book and a servitor to cover any and all gaps as I saw them, and as they cropped up.

A servitor is pretty easy to adjust, so for something like this I would prefer it over an entity or group of entities, assuming it’s a long term thing that is needed. Servitors can remove a lot of the doubt about whether or not a request, as they should be programmed to do what you ask, to the best of their abilities.

The hiccup with servitors is you may need to teach them, or be patient while they learn.