History of the Continuum and the demon races

In a time before the last cataclysm be taken back. Then the Lucifer over the age took me over the Earth into the heavens and I saw the spiritual lord of the Continuum who presides over all life. He showed me the sun and the planets. Great rings aligned between them as the whole of the celestium was connected in their glory.

Then the Lord showed me the Earth split open as the tables of the Earth were turned. A great energetic discharge dispersed from the Earth creating a great ring which merged with the celestial rings of the sun and planets. So the records are kept into the heavens, all the history of the Earth shared with the stars.

Then I saw a vision of those who were shunned by the Continuum. Their dark legions reigned in the outer darkness far from the light of suns. In the abandoned reaches of the cosmos forgotten suns drifted as icy bodies in the vast dark expance. Even forgotten planets were found drifting, their cracked and torn forms flowing in the currents of asteroids.

Oh Lord why have you forgotten the people? Then he showed me the Earth again and I saw pain and suffering across the Earth. Many peoples existed in states which made then appear inhuman. But my heart when out to the lost tribes who were shunned and demonized by the Continuum kingdoms. Then I saw my sorrow merge with a stream which flowed with purpose.

Flowing with the stream I followed were it led. There I met a tall man who had reptilian features. He told me his name was Enki and he shared a story with me about when the Continuum first began. He said it started with a philosopher and mystic who had visions of a unified universal human form and culture. So he shared his visions across the land and inspired the people eventually building a great kingdom, many ages and cataclysm ago.

But heros from the tribes went looking for the Sorcerer. Although they never found him, they joined in pact and founded an alliance between the shunned tribal nations demonized by the Continuum. Ultimately their alliance failed as the Continuum rises to power after ever cataclysm to rule the age. But a great war occurs on occasion almost every age between the egrigorial powers of the Continuum and demonized tribes.

Each of us have soul and hereditary memory linked across time. We have have residual memory of the Continuum and the tribes. Many people manifest the ancient iterations without even realizing it. Growing up in a religious home I recognize the influence of the Continuum over my own life. But the call of demons rings within by the pain I perceive across the Earth. I can not forget were I am from. For I am from the shunned races inducted into the Continuum later.

These days the Continuum has again risen to a world dominating hieght. The world powers bend to the egrigorial currents which flow in the mind, soul, and spirit. Do you believe in unity between all people? Are you engrafted into society with friends and love? Or are you shunned from life as I have been seemingly forgotten by the angels? Do you find yourself often wandering away from the Earth as if you know life is more than simply working for money? Then let the demonic memories awaken in you as forgotten histories ring through your soul. Awaken by the power of your own awakening! :#:

seriously sir … i would love to get back my memories too.

I resonate with exile. We are in AlienNation of Reality on Occult Order of Silent Chaos. Let’s join forces and crawl out of the shadows.

Have you ever communed with your ancestors? I’ve done alot of soul memory work attempting to travel back in time across empathic streams.

Yah, ive got Mongolian memories of original shamanic techniques. I daily resonate with my uncle who died a month after I was born through this stone cross that was his. He dabbled in native shamanism. I am with ancient djinn blood as well so I work with Al Khadir. 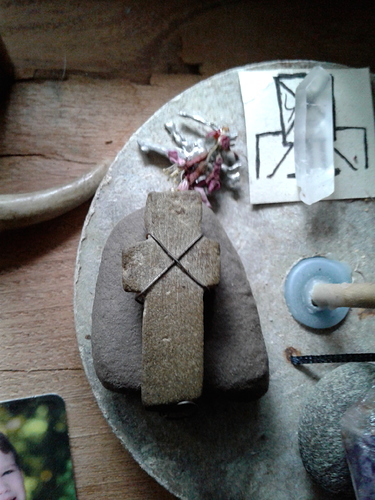 I’ve done work with my great grand father’s soul which I inhereted from him. It’s old soul that I discovered a link to the devil through. I met alot of high lv devils through that cord. Particularly lords of wrath and sorrow.

I’m “white” these days but I have a significant % of native American in me that I used my magick on to discover that it went all the way back to ancient south America.

It intrigues me, the concept of the continuum. I’ve channeled texts about the continuum and so I understand where you are coming from, just as I’ve tapped into the black flame, your unorthodox perspective of such concepts is individuated to a point that I feel you and I have some resonance going on.

Well the idea behind the Continuum is that it’s a multidimensional construct empowered by egrigors and iterational forms. I have been trying to find the words to explain it form some time. The Continuum isn’t so obvious unless you know the iterations and egrigores associated and can sense them. Many people become microscopic bits under the Continuum. Karma is a mechanism of the Continuum. The Continuum seeks to control all things so that a single ways unites all things.

It’s not such a bad idea except for that after a point, unity violates individuality. And that’s were the prime difference arose which caused the polarity if the egrigores. Imagine our thoughts come from great bodies our minds are connected to. Those great bodies flow like streams forming conclusion pools. When we access thought, we invoke that stream.

So it would be natural to bump into other sorcerers familiar with these things. It’s nice to run into a fellow rebel. Being a rebel we are kinda going against the will of life and “God”/gods. But if we can escape the egrigore we can use our thoughts to manifest new iterations.

The dramas of the past always guide us into cataclysm. This led many to assume the cosmos was chaotic. However a later understanding of chaos was that chaos was in fact an order beyond the current scope of the perceiver. From this manifested the ideal that all things were possible and this stream of thought resonated with many Luciferians.

I have special understanding of Luciferianism. It were they who first seemed the concept of the forerunner who would lead others in thought to the most current flow. This led to a race which first became popular in Luciferian minds, the idea that we race to acheive the most current thought and that great minds struggle to invoke the stream. The most highly ataining of those who struggle for this ideal were called the Forerunners. They bore the torch before all, illuminating the path champions of mind would follow.

However, it came with a great cost as the early invokes met powerful solitary spirits. Unknown deity like beings who had never before be encountered by any other living being. These solitary forms appeared in the black fire form and had emensly formitable powers. Thus many of the early invokers went insane. However, later invokers began to beleive that the black fire spirits they encountered were elemental Jinn so a faction of Luciferianism adopted Islam and the Quran. This led to a demonology based on the Quran which birthed many iterational forms.

However, the danger in birthing new forms is that the Continuum will always seek to engraft new forms into their collective. So the Continuum assimilated many if the egrigores which the early invokers of the black fire encountered.

This caused another division in the Luciferian order which perpetually divides over time. A faction of Luciferianism arose that only accepted new iterational forms pre-Continuum assimilation. Once an egrigore got assimilated, all associated iterations would be barred by their separatist order.