@Infinite_Dreamer He also says that by Demonizing the Vedic gods they Zoroastrians ended up creating a more accurate reflection of them. I think he said that these are ancient forces of counter-creation that were forced into a narrow cultural context by Hinduism or something like that.

You do not speak for Kali.

Yeah that’s true I remember it now. Yeah I guess they kinda of got full fledged freedom and to be in their natural chaotic form. Although Shiva depicted as Veerabadra (another aspect of shiva) was quite chaotic destructive and on a killing rampage without consideration for anything or anyone due to his outburst of anger. And sames the case with Kaali as Shiva always had to intervene to calm her down. So demonising would have given them freedom to be in that state always.

Demonizing the Vedic gods they Zoroastrians ended up creating a more accurate reflection of them.

Its not so much a reflection as a stripping away. By demonizing these god the imposed humanity that is placed on them is torn away leaving a more primal force, there by getting a step closer to the core that force represents. Least that is my understanding of it. Having worked with shiva and sovar i can tell you first hand there is a massive difference in vibration and manifestation.

I dont have any guru. I have worked with Shanidev and Hanuman successfully many times. All you need to contact them is Bhakti toward the deity you wanna call. Read about them, make some offerings to them then evoke, you should be fine

i’ve got some questions

I have a Guru. He taught me a meditation practice to go DEEPLY into the Theta-Gamma sync. I am currently doing my sadhana. I’ll let you know how it goes.

I will have a Guru as well, I am going to an intensive Yoga Programm this weekend, then i’m gonna start my daily yoga practice

Stumbled on to this rendering of kali, as they say a picture is worth a thousand words. 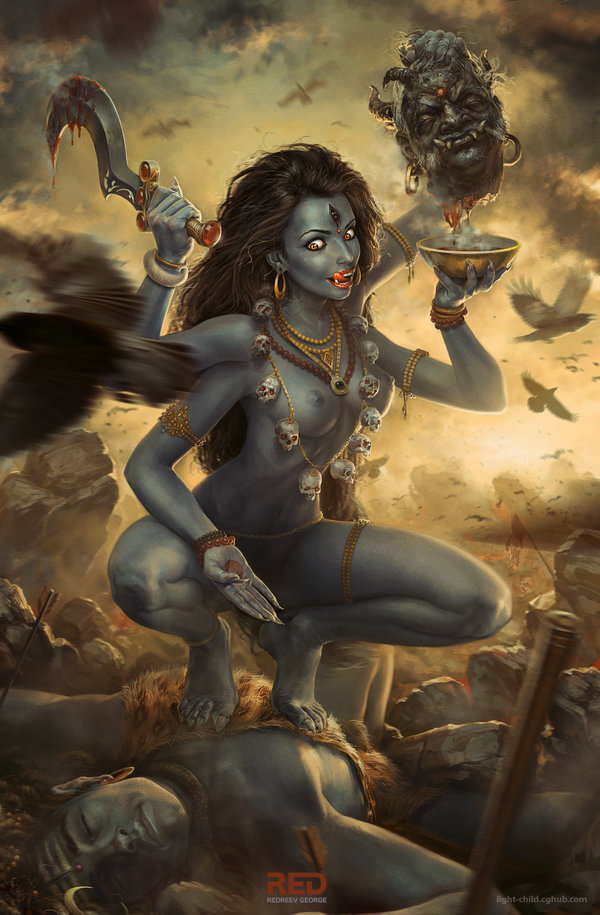 She is so beautiful

Hi, I have worked with a few Hindu gods and goddesses. I do have a Guru but I was introduced to them (or rather they found me) before I met the guru. I first met Ganesha via a news program back in the 90s about a Ganesha statue drinking milk. All of a sudden all Ganesha statues in India and across the world drank milk. I never forgot that story.

Some years later I was in a bookstore reading about Ganesha and saw how similar he was to Legba and Ogun in vodoun. (I was working this path at the time). Later through a friend I ran into a Guru who gives most of his teachings online and occasionally has some in person events as well. Other Hindu gods were introduced to me, but for some reason Shiva got my attention. He started calling out to me. Speaking to me in my head. First it was just a word or two and then it became a few more words, and now he’s like Chatty Cathy with me. lol

I’m not sure what’s happening but Shiva is very strong in my life now and he even gets me to laugh at things by showing me funny things he’s “doing.” He also wants me to call him more into my life. I’m not sure where this is leading but since this has been going on for two years now I’m rolling with it.

can you guide me through how to work with hindu gods?

can you guide me how to start working with the hindu gods?