Theon Pantheon. 24, Bi, Greek born in Greece and been in Melbourne the last 13 years, gender wise I don’t believe in general tbh, however I was born a male and go by he.

Been a witch since a child, open to the other side and connected mainly to nature elementals and ghosts as well as underworld beings, at 9 years old I learned tarot from my Albanian Gypsy Step Mother. My own mother was into psychic, tarot, astrology herself, also my great grandmother had strong prophecy and visions. My mother didn’t keep 13 siblings according to my father and I am the youngest of 4. So 17th.

Have always been into magic . At 11 moved to Melbourne and got a laptop. Witchcraft was my first search and I begun researching the Ancient Civilisations, Rituals, Deities and their strengths, occult, esoteric , gnostic, religious info ,several hours a day.

At 18 had Azazel come to me and lead me through a 7 or 8 month journey of finding out about him, his stories and all the symbols I was getting drawn to since a teenager were matching up. Had always empathised more with demons not being what Abrahamic traditions made them out to be. However never undertook working with Goetia and Necromomicon as a result of underlying prejudices from the Spiritual communities I was in since 15. Belial having come to a ‘trip’ was however a slight put off from working with the demons as he was very persistent at basically making me have sex with him and sexually serving him and allowing myself to let him inside me, was quite the rapey experience but also confusing because I wanted to give in, but was terrified for my life hahaha, now knowing what I know, I am ok with him and grateful that I’ve had some years to mature before working with the Demons in the manner I am.

Learned from a Mapouchi Lineage Medicine Woman and a Mentor from more a Black Foot Native American and Aboriginal Australian cosmology for the past 4 years.

I currently focus more on Hellenic and Greco-Egyptian Spirits of my Ancestors alongside the ones we work with on here. Which I find funny combining Hellenic-Persian energies as we believe my grandmother has Ottoman/Arabic blood being born in Izmir

That being said I had spend my last year calling for apocalyptic revelations to see truth. Which has gotten me to join Freemasonry, embrace the craft, legally changed my name to the name I received In 2014 and have started on the 9 Demonic Gate Keepers, started with Azazel as I was very familiar with him and found Asenath Mason’s free chapter on The Peacock King to be shockingly exact as to how I experienced Him for those 9 months when I was 18-19. Have read Belial and reading Lucifer Amaymon and up next is Abaddon. Have done the pact , and I really believe and am in alignment with the train of thought of what is being mentioned and shared.

I am glad to be here and having destroyed the left over indoctrination and prejudice towards this path. I was warned that Elders had seen me turn into a Dark Lord by people I cared for and as a result judged my darkness as bad and something to reject ! I am glad I have come around and grateful to the spirits for showing me that a prophesy sometimes is not a warning but rather a confirmation of where you need to be🙏

P.S apologies to the moderators for not having made this when I joined. 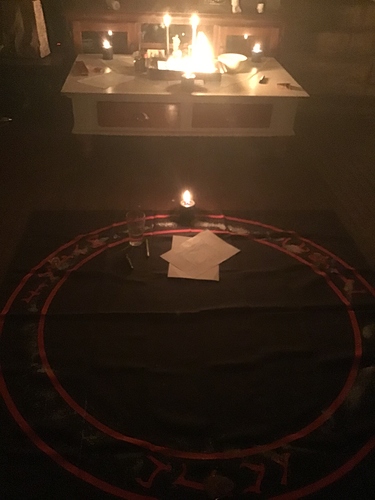 Thank you for doing an introduction as requested, and welcome to the BALG forum.

Thank you and sorry about that, honestly hadn’t seen any of the notifications till I just logged in via the iPad

Thank you brother , good to be here! I realised I had a few moderators after me for a couple of months , so I thought, lets at least make the intro decent.

Welcome ! Do you live in Melbourne Australia? Didn’t think we had magicians of your level in here

Yea Melbourne Australia, yourself?
Unsure about the level you speak of, but I can tell you I aint sticking on whatever level this is, hahaha have much more to get into and learn

Yeah I live in Melbourne too , haven’t met any one who’s in to magick , but then to the outside world I’m just a Positive thinking , meditating , spiritual person

ah awesome, what kind of magic ? Love to meet for a coffee

I just started last year , with GOM books mostly , then demons and other stuff

after some amazing success and a calling from Lucifer had a dry spell for a few months , getting back in to it again ! Yeah why not , can pm me if you like ! Would love to have a friend I can actually share magick stories with !