Help me identify this entity

Did a reading on who my patron/mator is…

I got cards in this order… Prince of cups, princess of disks, and 5 of cups. Who reminds you of that the most?
Prince of cups = Airy part of water or its elasticity. and volatility, and energy of steam. In this card he is seated in a chariot, surrounded by clouds and drawn by an eagle. He carries a lotus and a cup from which issues a spiral serpent.
Princess of disks = Earthy part of earth, or the element on the brink of transfiguration. She is standing; her crest is the head of aram; her scepter descends into the earth where its head becomes a diamond. Behind are a grove of trees, and centre is the chineses ideogram denoting the twin spiral force of creation in perfect equilibrium.
5 of cups = Disappointment. Geburah in the suit of water. Mars in scorpio. The cups are empty. They are arranged in an inverted pentagram. They symbolize the triumph of matter over spirit. 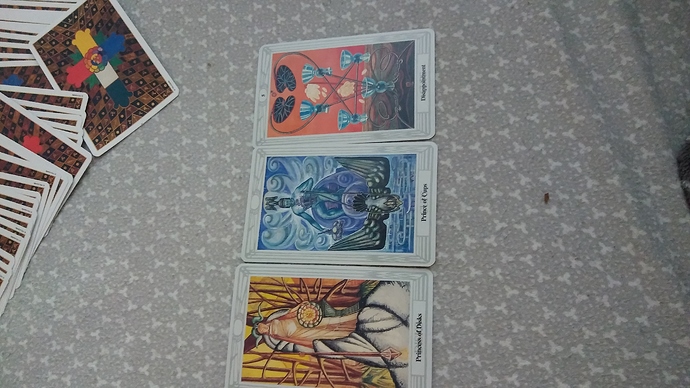 What immediately popped into my head was Kuan Yin. I feel like that’s more of a clue than the answer though.

The depictions remind me of wisdom, alchemy and kundalini. The spiral depictions give the vibe of a god/goddess of knowledge. . Gevurah is ‘the essence of judgment (DIN) and limitation, and corresponds to awe and the element of fire,’ Judgement knowledge and the spiral force. The balancing of good and evil? Kundalini… Perhaps Thoth? @KingOfHearts616

My first thought was that it’s Aphrodite…

While I feel OK about attributing Eros and Himeros to the Prince/Princess of Cups/Disks, I am having some trouble figuring out the relationship between the 5 of cups and Aphrodite…

but then again, i’ve been drinking, so who knows whether all this came out of my ass or not lol

Didn’t even think of aphrodite

interesting! There are no wrong answers in this please let everything loose

. I’m going to pull another three cards and see what we get 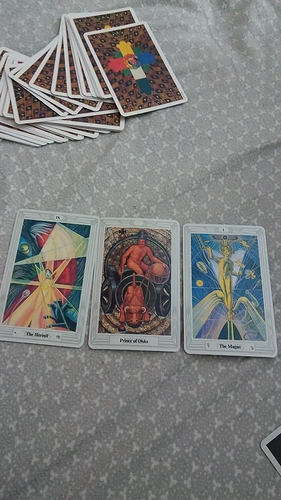 Asked the question again but specifically asked to narrow it down. I thought I was going to pull The Magus card as well. Interesting

first card shows elements of the underworld, the heavens, and the living realm, and there’s motion between all three reflecting Hermes’ duty as intermediary and guide

second card gives a very earthly vibe and Hermes was heavily involved in the lives of mortals and their activities on earth. Hermes is even referred to in the Hymn to Hermes as a cattle driver… which is obviously also depicted by this card.

third card… i mean, it has the freakin symbol of Mercury (Hermes) right there in plain sight lol… and once again there’s a theme of the heavens and the earth, which Hermes travels to/from constantly. The Magus also encourages one to tap into their full potential, which, to me, sounds a lot like Hermes’ duty as an evoker of inspiration

hmm now that i think more about it… the prince of cups could arguably represent Hermes, while the Princess of Disks could represent Aphrodite (the card is associated with Venus)… while the 5 of cups could maybe be seen as their child, Hermaphroditus, because while “disappointment” is associated with Mars (Male) it also has very Female imagery (the lily pads are reminiscent of ovaries, cups and water are both very feminine, and the pentagram as the symbol of “man” is “inverted”…), and “Mars in Scorpio” could easily be associated with “Male merged with Female”

You know where I sit on this. I can divine (or try) for you, but my suggestion, as I know what your doing, is run through that invocation.