some form of cloth will always be nice, holders for candles, something to burn incense on or in. past that, whatever you feel is good to put onto it. Here is my Own that ive just recently rebuilt. still got some cleaning to do, but it’ll pass for now. 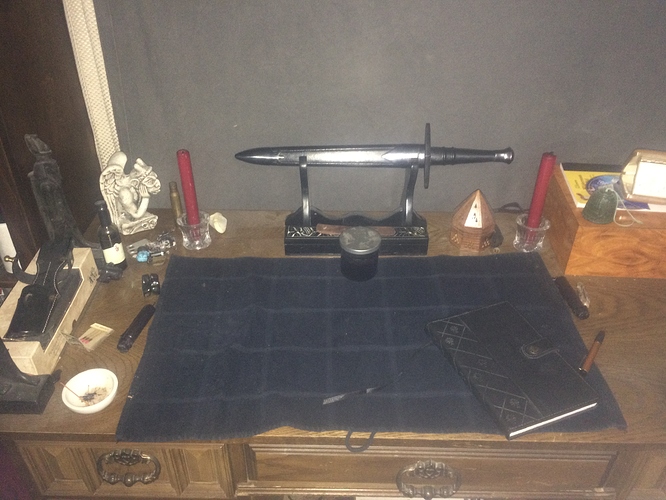 A lot of altars I see seem very messy to me. They are supposed to be personal, whether that is personal for you or for a spirit depends on the function. For me, what I would do is keep the basics on the altar and then keep everything else in little boxes. Because if I’m looking at a dozen different tools and the left overs of previous rituals then I’m not going to be able to focus on what I’m doing now. I’m sure that people that are less anal about that kind of stuff would say something completely different.

I would generally suggest a cloth spread, to help designate the area. I find a bowl useful for holding liquids and other stuff that has to be ritually consumed. A knife to cut things like plants or string, a lighter to burn things with. If you can cut, burn and contain then you’ve got most of your practical bases covered. People like candles because a lot of magic is written around their use as light and fire sources, you could replace them with other stuff, but most modern light sources are actually way too powerful to stare into, so it actually works rather well, though maybe a kerosene lamp might be less messy, possibly easier to anoint too.

Generally I also like to have a way to write or draw stuff, maybe to burn it later but even so, and an exacto knife to get some blood out with, but neither of those things are ones I leave exclusively for magic, they’re just stuff I use everyday.

What you put on it depends entirely on your plans on future workings. some people dedicate it for the workings with spirits of darkness, some for angels, some for ancestors and much more. Pick your poison.

There is a thread about altar pictures.
I think it could be useful.