Getting fucked over....and what I did about it

I recently had a very close friend/business associate fuck me over out of a good sum of money. This was a clear cut theft by misappropriation.

I was furious and the man blocked my mobile and my messenger I couldn’t reach out any other way.

What really hurt me most is that he was a good friend for many years and if he needed the money I’d have given it to him if he asked.

What I did about it I decided I wanted my friend back and my money.

I appointed prince Orobas as team leader for his reconciliation powers and return of lost objects.

Then botis was called for reconciliation

Agares was called to return a runaway

Dantalion was called to change his mind

Andromalius was called to punish him and make him return what was stolen.

After three weeks or so he broke the silence and said he “was ready to face up to the disgusting things he’d done, everything was turning to shit on him and he wanted to repay me”

This is how I handled my anger and wrath. Now I’m getting my money back this morning and I have my Friend back as well. It will take time to regain my trust but that’s how relationships are they take work.

I recommend these spirits in this layered working if anyone encounters something similar.

This wasn’t me having an ego trip or desiring to hurt him. This was what I consider an appropriate, measured response.

Thanks @Matthew1 I think what really pissed me off the most was the thought of losing three times. First the money, then the friendship, third the future business.

But then if I did that I’d still be out the money, the friend and the business…

That’s why I took time to think before acting on anger and decide what the best outcome looks like.

I’m not saying don’t flex your muscles and use baneful magick. I’m saying make sure it’s appropriate. That’s all.

Definitely. Not every situation needs a dramatic cut scene.

A well layered work! It’s very helpful seeing how you worked on the different aspects of the situation.

Great job and fantastic outcome! I’ve recently had to do something fairly similar…

Wow that’s actually quite well restrained. I’d find it a lot harder to deal with if it were a close friend but by the same token I like to remember people how they were (if they were better) than how they are. I’ve watch a lot of people change for better or worse and made unexpected friends/enemies. Still to the point, when it’s someone you’ve known for years it feels like they died in a sense. Gratz on your reconciliation, great to find what is lost!

Yes my friend it was very restrained. If there is another problem with something he does again. I will brook no aggression and my anger will be swift and ceaseless…

I was greatly sad at what he was willing to sacrifice for a brief small material gain. But we all make mistakes and I’ve worked with him almost three years. He’s been like my local contact for materials for my business. He speaks the language of my taiwanese suppliers. He’s been tremendously helpful to assist me in getting things at the right prices and not get screwed. So for me I needed him back just for business, I’ve made shitty choices too so I can forgive him. It took alot of balls for him to return to me so humbly and contritely and to take responsibility. I respect him floor that. It’ll be awhile before I trust him again. ( That was totally duke Agares and Earl Andromalius who brought him back humbled like a whipped dog)

I told him today about my ceremonial magick practice. He is quite superstitious like most here in the philippines. He was quite frightened, he thinks I’m a Bruhero. I told him never do wrong again with me or it will be very serious.

He understands, after he stole the money everything in his life went wrong, he went to a local witch doctor who said someone put a spell on him, the witch doctor recommended he give back the money to end the curse. Lol ( of Andromalius)

A good rendition of Earl Andromalius 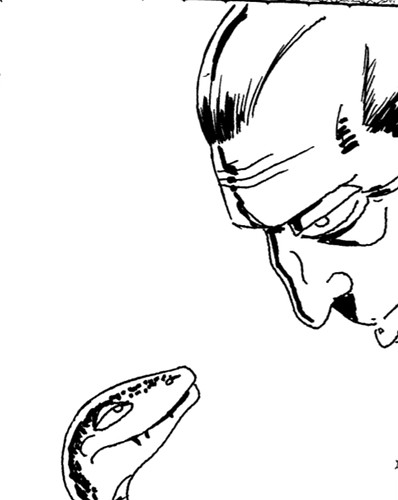 Phillipineans are mega Christians lol so he would be freaked out massively but maybe he will spread stories about you? Stories like this though always make me wonder how much spirits and the universe are using us. Do I even have free will? Or is it just attention to certain things that brings me down a more fortunate series of events/better alternate reality?

It’s infinitely better that you salvaged it and transformed him (or at least given the opportunity) for the guy. I sure as hell know I’ve fucked up time and time again where a normal or average person at least would have abandoned me. Have never heard of Earl Andromalius but will give him a read into, thankyou

Have never heard of Earl Andromalius but will give him a read into, thankyou

I’ve worked with him twice he’s an absolute Snake charmer.

This is a fantastic result Mike! You gave real level headed and measured response to his actions. It must have been horrible to have a person you considered a friend steal from you.

It’s great that it worked out with interest on top too.
That guy obviously suffered deep regret for his behaviour.

Stories like this though always make me wonder how much spirits and the universe are using us. Do I even have free will? Or is it just attention to certain things that brings me down a more fortunate series of events/better alternate reality?

Mmm that’s actually a good set of questions. I think…

The spirits use us as a vehicle for expression in our world. I think sometimes they engineer the very situations we call them to fix. They have a very different vantage point than we do. They see further into the future and can tell what things are likely to come to pass.

After my work on the 72 project I feel I have a new relationship with the spirits. They use me to manifest thier power in my world. I use them to bring about change in accordance with will. It’s a relationship that works.

I’ve had this thought previously but with a friend of mine who was very good at manifestation. Like he’d personally tell me what he was trying to bring about and then within a week it’d happen. He’d then joke that he was making the universe use everyone around him. He wanted to get a book about birthdates and their meaning and to no surprise he attracted the book a week later which said that his birthdate was very strong at manifestations, Mine is supposedly to bring out either the worst or best in people and was considered an extreme one

Do you think you could’ve gotten these same results if you were more of a beginner? I’m a beginner and would love to try this but want to know how to do it right!

I don’t know to be frank. I think yes you can though.