yesterday i put some thought into balancing the different energies in my life, and here’s what i came up with:

at first i was going to conjure paimon for a full possession ritual.while drawing paimon/azazel’s sigils, i had another idea.

so i drew up my birth chart, and using this wheel, found the goetic spirits of each part of my chart where i have stars conjunct planetary spheres. that gave me six goetic spirits.

looking at the spirits ruling over each sign, i also found the two rulers of all goetics tasked to each celestial body in my chart: they are amaymon, and gaap (who happens to be subservient to amaymon). so six goetics in my chart answer either to amaymon directly, or through gaap. interesting!

i drew their sigils as well as gaap and amaymon’s. (i got amaymon’s from ofs demonolatry). i also drew constellation sigils and wrote star names under the sigils so i could represent the stars conjunct my planets. conjunct stars add energies to your life that you may or may not be aware of.

last night i skryed amaymon’s sigil and requested a possession. all types of crazy happened, and then i went to sleep where i had some wild dreams.

it didn’t feel like a possession, more a spirit manifestation, the likes of which i’ve had before. the dreams were very intense.

i’m going to keep working at the possession rites and when i get contact with amaymon, will ask for advice on my chart and how to both interpret the information in a way that makes sense, and also begin to change my karma. my chart is all over the place and has both contradictory, and unhelpful energies that cancel each other out. would like to change that.

Sounds like some fun man hahaha. I did a rite of possession a few weeks ago and I’ll tell ya what lol it not only changed me but it also made me want another. It’s such an invigorating feeling when you become the entity you are working with. Takes a lot out of you but the reward is great. I hope you the best and that your possession will change you.

first (actually, third - i did a couple on the weekend) possession DONE!

this weekend i was looking for a spirit to do the possession. i came across a new sigil of belphegor, and skryed it on friday. i had some wild dreams. i had a really strong visual dream, it was very sexual and strong. at the time i didn’t consider that to be a possession ritual, it seemed to me to be a typical evocation with a stronger result, but now i know better…

yesterday i was contacted by velotak who gave me a list of spirits to contact. he said they all like possession rituals. i plan to do a ton of convocations in the future, so i had set them aside. however, i thought, let me see if i can create a sigil for trance possession by one of these spirits. i chose kimeron, and made this sigil for it.

after drawing the sigil, i got some form of contact. but then, i got a change of plans. something told me, not yet. someone else wants in first.

i then went online and found the sacred magick of abramelin the mage, book 2. i saw both amaimon and paimon in the list of 8 subdemons (remember, i drew sigils for both). then i thought, since i looked to the rulers of the goetic spirits i found on my chart, why not look to the ruler of the subdemons? and sure enough. that led me to lucifer. i’ve come across this before. in quimbanda, if i’m not mistaken, one of the three exu rei is lucifer (the other two being astaroth and belzebub), and the three answer to the maioral, who some say is michael, but is probably some other spirit not named outside of the cult. the three spirits of exu rei are the rulers of the grimoire verum, so calling on one of these rulers first only makes perfect sense if you want to maintain order in the heirarchy, especially if you don’t know who the maioral is.

since lucifer is one of the head honchos, i decided to crown him first. even though astaroth actually called me beforehand. i may turn out to conjure all three just in case and let them decide how to work with me.

what i then did is i drew lucifer’s circle and sigils on paper. then i cut the sigils out and put them in the middle of the circle.

at bedtime i skryed lucifer’s sigil and did a conjuration where i called his name. i then did erik’s glossolalia prompt as my hypnotic confusion induction.

the strangest thing happened. i defocused the sigil, and instead of getting the theta-gamma sync, i got a blur and then started seeing visions. same as when i skryed belphegor’s sigil last week.

when i deepened my trance, i felt groggy and so i put the sigil under my pillow and slept on it.

i got so many dream instructions last night it wasn’t even funny.

woke up around 3am and thought, holy shit did i learn a lot. but as soon as i got up, i started to forget!

not only that, but i felt something that has been haunting me for a very long time: my solar plexus was cold.

so i reconjured. i explained and said, look. i don’t want to forget what i just learned, i’ve been waiting forever to get this much good knowledge. either teach it to me in a way that i retain it, or tell me again so i can write it down.

i also said, i want to invoke lucifer into my mind again, and crocell into my solar plexus to warm the waters of my body.

then i did glossolalia again, and i started to move my hands.

it took about a minute and i felt my elbows were being moved. it happened pretty quickly, actually. and my arms were moving pretty quickly. it actually took me by surprise.

it was strange because my hands didn’t move but my elbows did. i totally expected my hands to move, and especially my thumbs, because in hypnosis we are taught that your thumbs and fingers have the most nerve endings and are the contact points to both send and receive mesmeric energy.

but my elbows were active. they were moving so much i thought i was going to bang them on something!

it only took about a minute.

and i went back to sleep (did the whole thing lying down) and had more dreams. but these dreams were different. i saw energy moving through my body and felt it. it was much more vague than the first dreams which were pretty powerful. but i woke up feeling a lot different.

i also had a simple but pointed realization when i got up. it’s an axiom i can use going forward.

now i understand why erik says possession has to be done in the right place under the right circumstances. most of the time we’re not free to really move with the possession feeling. it’s supposed to be complete unrestricted freedom.

i’m going to have to find a field outside somewhere to really let go and do this again. and i have a TON of sigils to launch for this type of work.

to be honest, i feel a little bit out of sorts right now, but it’s a good kind of spaciness. i finally broke through some type of block and got to another level in my spiritual practice.

who knew that the way forward was to go inward.

a lot of western mages are scared to death of possession but it was such a positive experience. still, we’ll see what happens next.

on another note, i watched this video taylor ellwood posted up on facebook this morning.

he explains how he works with goetic spirits. in his system, he says he also begins by doing possession rituals and then evokes on the back end. his possession style is more along the lines of a trance hallucination and it reminds me of the betty erickson induction, but the 3 things he focuses on are the spirit’s name, which he repeats louder, making the induction into a combination induction/deepener. VERY straightforward way to conjure and perfectly in line with hypnotic principles.

the coolest thing about taylor’s conjuration is that it gave me a flashlight moment: i can use any hypnotic induction method to conjure now.

If you’re still interested in this can you please say where & what source to find how & what Spirits are in your chart?

I just looked again at the post date had no idea this was 3 years old. I am interested in possession as in a way to learn from them and share the power, but I’m still in control.

The chart is right up there, in the first link of @the_magician 's post.

The source material used is The Book of Solomon’s Magick by Carroll Runyon, also of the O.T.A. Major changes from source:

The mandala contains western astrological symbols of the zodiac and of the planets, as well as the names of various Solomonic angels and demons, although it appears crafted especially for the referencing of information for summoning demons.

Source: This is a standard reconstruction of the Ordo Templi Astartes’s Master Mandala.

Source for the info above (had to use a cached page because the website is offline, I think). 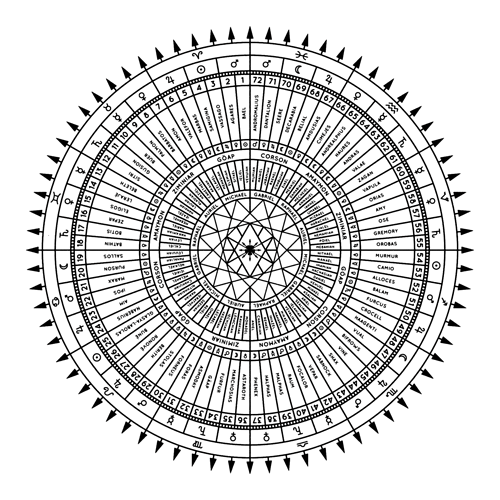 You’ll have to cross reference it with your own natal chart.
Have fun.

Thank you @Traveller. I didn’t see it even with my glasses.
Thanks also for replying
I am wanting possession by Azazel for a short period but i really wonder if i know how to release control

You’re welcome and thank YOU for bumping this thread! I was searching for those astrological correspondences for weeks and I didn’t know where to look… and it was here, in a possession post. Hah, causality can be so entertaining.
Yes, I saw your thread. Don’t know how it really works to build a relationship/connection with Azazel, but to release control requires a good amount of trust.
Don’t rush it. You will get there.

@Traveller
“causality can be so entertaining.” Yes it sure is