What technique works best for you?

I just pull energy from people… Looking into their eyes helps a lot… Physical contact helps too.

A bit of visualizing. But mostly its feel… I just feel other peoples energy syphon into my body… I used to use the visual of a vortex sucking energy towards me

The essence of any feed is ultimately the same for me: think of the Victim and remember their energy signature if possible, sympathetically connect to that Victim through intent as if they are really there before me in my mind and even the room, and once I begin to get energy sensations I begin to reverse my chakra polarity to will/pull into myself from their chakra until their energy therefrom feels depleted; yes, often following along with the flow of my breath. That is pretty much the same underlying technique used at any distance; the proverbial meat and potatoes here.

Visualization for me is often faint and minor, or is simply not used consciously at all anymore compared to “feel”. I don’t always use breath either, but would say it’s typically easier to do so. “Tendrils” in that sense are also absolutely not necessary just as much as with the prescribed hoopla around learning to make and use them, of course. Nonetheless, you fruitfully employ thoughtforms like a tornado to increase your energy draw, or, say, some expanding barbs to will someone to remain still, but again, it almost never happens anymore that I feel the urge to bother, at least.

You can also do certain things to mask your feed like limiting draw strength and depth, and obscuring your psychic connection through obscuring your aura and body language. Given that sensitive people will be able to feel intuitively that something is wrong it can be useful to keep in mind. But all of those fall under icing and decorations compared to where I began this post.

Another basic feeding technique is to essentially overlap the victims aura with your own, although this can more easily lead to potential backflow issues than utilizing a more specific connection as I understand it. I rarely use this technique unless the victim is very high energy. As I said, I instead pretty much connect, pierce them and reverse my chakra polarity as my standard method.

On the aside, I would suggest looking to the side of and almost through your Victim much as how you might gaze at a magic eye painting–and not staring directly.

I don’t tend to steal energy from people since I’m a powerhouse of energy most of the time but when I do I pretty much Ram my Astral Arm through their Solar plexus and pull out the goods.

First thought that came to mind 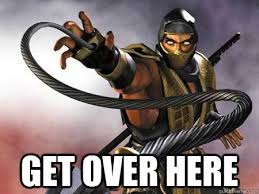