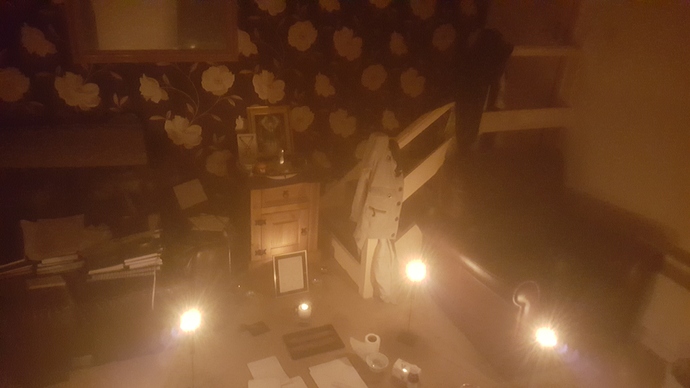 Since this was my first official ceremonial evocation, this was very sacred to me. I was already in the rapture state and this furthered as the binaural beats dedicated to Lucifer played in the back ground at a low volume, but just enough to have an effect. The ritual space was set out like this: 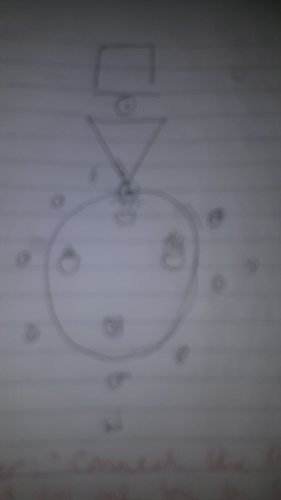 20200824_0356022988×5312 2.31 MB
So I am set to begin, dragonsblood oil anoited on my third eye, temples, crown and the back of my head. My energy was supercharged and as I began the evocation, I could feel the chills as Lucifer’s presence was made know to me; his energy bonding with mine. As I repeated several incantations to evoke Lucifer, my living room became thick and dense with Lucifers presence. Fankincense bellowed in straight colums from my loose insence burners. The incense smoke didn’t move and accumulated around the ceiling above Lucifer’s altar and slowly descended back down. I saw this as a manifestation of Lucifer but I didn’t see any of his apects come through physically, but he was there. As I became more induced to the rapture state I could feel Lucifer enter my mind and body.

The following is a transcription of the conversation with Lucifer during the evocation:

Me: Welcome to my home and into my ritual. Thank you for answering my call.

Lucifer: You honour me and continue to honour me in many ways.

Me: I need to discuss with you the matter of my path, my journey, my acension.

Lucifer: Now that you have performed your first ceremonal evocation. I want you to start to start working with Bael. Here you will learn about how to build yourself into a King, who will then go on to forge an empire. Bael will show you a good work ethic. You will first invoke Bael to start a working relationship. He will then assign you tasks, which will help you to become intiated into the current of the Infernal Empire and your rise to becoming a King.

Me: Will I still work with you?

Lucifer: We will still have “our thing” that we do each and every evening. Your main work will stem from Bael. He will nuture you and raise you from peasant to knight, from knight to king; then Bael will show you how to forge your own empire.

Me: So this is where my work begins. How will my pathworking be with Bael?

Lucifer: Intially it will be set for 90 days. However, that could decrease or increase, which is at Bael’s discretion.

Me: How will my progress be monitored?

Lucifer: Bael will inform me which in turn you will be informed by myself through invocation.

Me: May I share this evocation with my soul family?

Lucifer: Since it is your first time and you have popped your cherry…haha haha…I will grant you that. There maybe times when recieve gnosis that is just for you.

Me: Is there anything else you would like to tell me Lucifer?

Lucifer: Not for now. First set up an intial talk with Bael as an introduction so he can make plans with you.

With Lucifer’s sigil that I drew during the evocation, I used a lancet on my finger to draw blood; I drew quite a lot of blood so I could really cover Lucifer’s sigil with my blood. 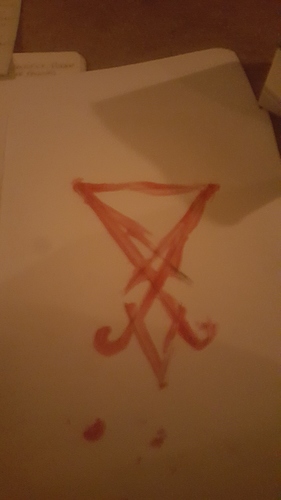 I then closed the evocation.

Me: Lucufer I thank you for being here tonight and I give you the licence to depart to whence you came. May there be peace between us.

My next journal entry will be titled “Walking Along Side Bael - My personal pathworking with the King of Kings” which will follow in the near future.

Damn, using blood to draw the Sigil, that’s hard. I’m not a big fan of blood use in rituals but thanks for sharing your talk with Lucifer!

I drew the sigil with a pen first then traced it with my blood. The best offering you can give any spirits of the Infernal Empire.

Great! Really loved your experience. Good to see you moving ahead and grow. May the enormous blessings of Lucifer and Lilith be bestowed upon you.

Hi brother, I tried to pm you awhile ago just to check upon you but I guess You kept it turned off. Hope you are well.

Oh I must of missed that. Sorry

No, don’t need to be sorry.