Entity that keeps peeking into my house

There is a creature that keeps looking into my house occasionally materialising. It is tall enough to humanoid 6-9 feet and it watches me in the window. It has like a upper skull on it’s head with really sharp teeth and it always have a weird feral grin which watches me. It’s bottom is made completely of fur and it is tall and lanky. It has not done anything but when it’s there it is extremely cold compared to what it should be and I live in a temperate area with some forests nearby but not that many. It has been there sometimes and it does not do anything but watches. Occasionally smiles. It’s weird, what could it be?

I don’t know what that could be. Probably some kind of alien. Where do you live? I would wait for it and try to shoot it next time it shows up. Or you could set a trap for it. Let that fucker step in a bear trap see if it lurks around the house after that lol.

I live in Wollongong, Australia. We don’t have guns here, it’s restricted. I have to becareful with bear traps as there are family around since I live with my parents still and I have cats.

You guys are not allowed to have guns? How do you protect yourself from the government should it become tyrannical, ?as if it wasn’t already…

you have to protect yourself from the government?

Yeah, let’s please keep the issue away from non-spiritual stuff like politics, we are getting distracted.

Talk to it, see what the entity wants.

It sounds like he’s just waiting for an opportunity to enter your home. Sometimes there are spirits that can’t without permission but usually they’ll take any little thing as a go - ahead. Do you have wards on your doors and windows?

My doors and windows are not warded but they are salted and I regularly sage the house. I only ward my room because they parents scold me for my alternative belief system. I have marked this house as my territory though.

How do you protect yourself from the government

Magic bro. The government knows nothing of God like power

Or a skin walker! this story is creepy…

While it’s kinda similar, there was next to nothing human about this creature whatsoever. I may attempt communication via my spirit form as I am not as vulnerable in it.

Wollongong has a fascinating history and, each week, the Advertiser brings you a story from its rich past.

This article says that people have been seeing something similar in Wollongong since the early 1800’s.

Here is an excerpt from the article that I posted above -

"The Cordeaux Serpent was first mentioned in the news in June 1871 when the gorilla story broke. Just five months later, the Illawarra Banner carried another story about the sighting of a serpent. This time it was Moses Driver, who was stripping bark from a tree near Mr Moran’s when he heard a “whirring” noise. He turned to see a large serpent slither between the upright brushes placed to keep wallabies off the property. Warily, he moved back, and after the creature went back through the brushes, he went to look and all he _

found was a giant skin

_ that had been left behind caught in the brush. He thought to himself that the snake he had seen must have been what the locals called “Andrew’s Serpent”.

In years prior folks had also seen a “large animal”, which by the mans account was, " “Height about five feet, slender proportioned, arms long, legs like a human being, only the feet being about 18 inches long, and shaped like an iguana, with long toes, the muscles of the arms and chest being well developed, the back of the head straight with the neck and body, but the front of the face projected forward with monkey features. Every particle of the body except the feet and face covered with black hair with a tan-coloured streak from the neck to the abdomen. While looking at me its eyes and mouth were in motion, after the fashion of a monkey. It walked quadruped fashion, but at every few paces it would turn around, and looked at me following it, supporting the body with the two legs and one arm while its other arm was placed across its hip. I also noticed that it had no tail.”

I enjoyed the video about the “skinwalker”, It is rather striking that these accounts are so well described in each case.

This is, also, fascinating because there are accounts, all over Australia, of shape shifting beings. Something you guys may find interesting is that In Aboriginal beliefs the “clever man” is also known as the hatman. I know of know association with the shadow people. I do not think they are of the same ilk.

Personally, I have witnessed an Aboriginal woman and her son “appear” out of nowhere! They had been standing about six feet away from us, in the park, yet we could not see them until the mother allowed herself and her son to be seen.

Australia has some wonderful mysteries. 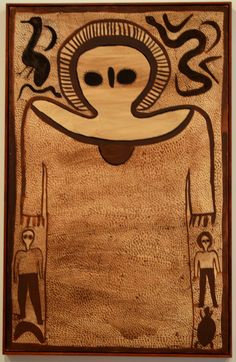 This rock art here depicts a being known to the Aboriginals. These were known as the Wandjina and they were, believed to be rain and cloud spirits, according to a quick google.