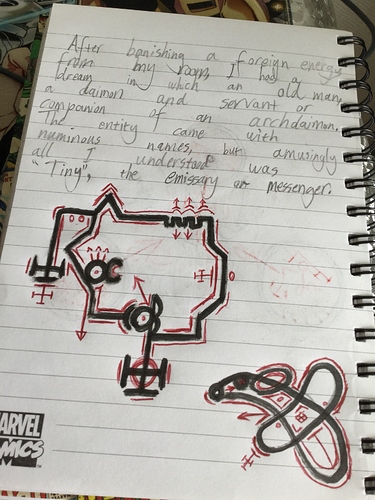 image2448×3264 2.09 MB
I had a dream in which a wrathful yet lusty demon approached me. He had two forms, both similar. First form he appeared as was a tall and incredibly handsome man wih long well kept flowing white hair, kinda looked like Sephiroth from final fantasy mixed with leone abbachio but alot more dark and bloodthirsty looking. He weilded a large machete and came on a tide of screams. He was very wrathful, yet lusty in his second for, which was him clotheless having red skin with blue tiger stripes. He approached me flirtatiously, and his name was “Asmo”. Now a demon of wrath and lust, both traits of mars, one could only assume that this is asmodeus.

The dream cut to me invoking asmodeus in a ritual with many sigils. Until, 2 new sigillum took form and at the top of my dark staircase was a very short, timid, and shy elderly man who appeared donning the sigil aforesaid. He had many names but one that stuck out was “Tiny” for some reason. He had given me some important advice…, and it pisses me off that I don’t remember that important advice. I know that it was to help me invoke “Asmo” but thats about all.

Reading up, the sigil sort of matched Amy’s from the goetia, and the descriptions match up sometimes too. There are few discrepancies though, why would amy appear as an elderly man, and why would he be an emissary or messenger of asmodeus? Too many questions left unanswered, and I would like to find the identity of this nocturnal spirit. Any methods how when all I have is a form and a sigil?

Asmodeus has never appeared to me in a dream looking like that, and i know he wouldn’t want to be called “Asmo”. Amy I’ve had no encounter with this far, so I can’t give you any advice regarding that demon. He has appeared to me in my dreams, but never once with blonde hair. And although you will feel his intensity and that he is capable of doing great harm during summoning, he has been very charming, eloquent, well spoken, and friendly to me. He can incite angry and lustful feelings in the caster, among other things, but if treated well, with respect he will return that. I honestly don’t think that was him, and you could have had an impostor of some sort. Amy on the other hand, since they all work together towards the same goal, I don’t see that Amy would be there as a contradiction of sorts, since Asmodeus is a King. It does seem like you had impostors, and that does happen.

Asmodeus can be sly, but when he speaks he is direct, and you know what he means, he wouldn’t refer to himself as asmo

I’m not downplaying your experience, I’ve had impostors before, not sure about Amy, but since King Asmodeus has been my patron for awhile, I’m familiar with his personality.

he didnt actually speak to me directly at all, thats the thing. He never referred to himself directly, his mannerisms to me however were in a direct and sort of elegant manner. It was direct though. “Asmo” wasnt even a name spoken, it was a name that was just sort of ringing in my head in an incomplete manner, so it well could’ve been asmodeus but my dream brain refused to make the completion. I was never certain it was him but it felt like his vibes, I think.
The elderly spirit spoke to me in a very calm, sincere and sort of anxious manner. His advice was proper, I just need to find out what exactly it was.

That’s a very good idea, do you have demon cards? The tarot deck I mean?

No, I do not have tarot decks, I do however have a pendulum bound to my 4 guides, Moloch, Leviathan, Frimost and Astaroth

Damn, well that should do it lol

I rely on my pendulum mostly, if I don’t get a clear answer, as my main gift is clairvoyance. Still working on the other clairs

Hello, update. The old man was indeed the spirit of Amy. He had come to give me assistance, and I have confirmed that “Asmo” was actually indeed “Aeshma”, as in “Aeshma-daeva”.

Well, no wonder you felt so much rage