Dream about a hybrid animal

I had a dream early this morning and something significant showed up which I’m not certain of. Hoping to get some insight if possible.

To cut the story short, I was in front of someone’s house, and it was the type that has a crawl space under the house. It was quite misty outside. Under the house were loads of animals, strange ones. One of them was a fox-like animal. So the animal looked like a type of grey fox with long and soft fur, a huge bushy tail, but its underside was fiery, like it was a fire elemental. It came towards me, and it just rolled in pleasure when I was petting it.

Does this sound familiar? Is this something like an animal totem?

Do you have any shared traits with foxes and fire? 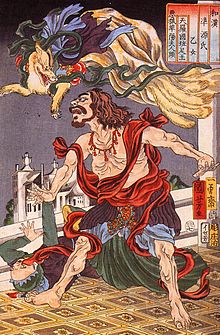 Kitsune (狐, キツネ, IPA: [kitsɯne] (listen)) is the Japanese word for the fox. Foxes are a common subject of Japanese folklore; in English, kitsune refers to them in this context. Stories depict them as intelligent beings and as possessing paranormal abilities that increase with their age and wisdom. According to Yōkai folklore, all foxes have the ability to shapeshift into human form. While some folktales speak of kitsune employing this ability to trick others—as foxes in folklore often do—other st...

From the wiki above:

Other supernatural abilities commonly attributed to the kitsune include possession, generating fire or lightning, willful manifestation in the dreams of others, flight, invisibility, and the creation of illusions so elaborate as to be almost indistinguishable from reality. Some tales speak of kitsune with even greater powers, able to bend time and space, drive people mad, or take fantastic shapes such as an incredibly tall tree or a second moon in the sky. Other kitsune have characteristics reminiscent of vampires or succubi and feed on the life or spirit of human beings, generally through sexual contact

I have had some pretty significant and even prophetic dreams lately

I was born under a fire sign and it wouldn’t be the first time I’ve been accused of being crafty (sly).

In all seriousness though, I first thought it was a hybrid of a type of fox and a fire salamander for some reason. It reared up at first to show me its fiery underbelly, which is why I initially thought it was a fire salamander in the dream. But when it was walking on all fours, it looked mostly like an exotic type of grey fox. So after waking up, I thought maybe it’s some sort of fire elemental.

My current situation involves a nasty enemy who sent me shades of the Dead and a demon to contend with. I’m told these shades can be dealt with using fire/solar energy. Not sure if there is a connection between that and the dream, but earlier, it occured to me the fox creature might have been a symbol of how I should proceed.

Proceed as cunning as a fox but with the fire of tabasco sauce …?

Well yes, that makes sense to me too. I wish you goodluck!