I am so sick of hearing about this doomsday prophecies, DOOM, DOOM DOOOOM. 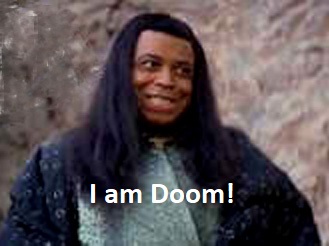 What’s everyone else’s opinion on doomsday?

I do believe in a sort of apocalypse, but its nothing like what the religious folks say. When you think about, from the beginning of time there have been species of creatures who haved lived on the earth then went extinct (the dinosaurs are a fine example). Humans have been here a long time, so i feel like as some point in a long time from now we could go extinct as well, but the cause for it would more than likely be from climate change and people destroying the planet.

You know, it’s nothing new. Every age that end, there has always been “end of the world” scenarios in every religion. Its been getting predicted for centuries, and STILL keep going on. So I consider it a natural cycle, where its nothing to be afraid of.

Eh, yes and no. Will we all die some day and mankind will start over? Probably its happened before, and will probably happen again. Will it be the theatrical version from the bible, no, most likely not, although howling demons and horsemen would be cool but highly unlikely. Probably if the world “ended” it be by nature or our own hand

I don’t really see how that is an effective scare tactic when there are presently more visible and immediate dangers like domestic terrorism and mass shootings.

If anything, it’d be in any leader’s best interest to steer clear of rumors about an apocalypse and look like they at least have some modicum of control over their national security.

I think there’s an underlying spiritual significance that is explained incompletely in many traditions and currents, often talking about cycles rather than a hard stop, and this is quite interesting.

I don’t follow mainstream media so I’m not bothered by this, which I assume are the effects of them feeling this energy on them. I would expect the info to come out in a garbled and then sensationalised way, because that draws clicks and clicks sell ads… and ads make money, and money is power. So, yes, they’re trying to gather power, one way or another.

If you’re sick of it, why hang out in places where you hear it?

I completely agree: constant fear of death induces a form of low-level PTSD which discourages long-term thinking and planning, and people in a state of fear are easier to control (not to get political, but look at how quickly cherished rights are given up after any major “terrorist” event).

In my country, when a new end of the world is announced, people don’t give a fuck outside of making memes about it. However, certain religious people, mainly JW and pentecostals from poor neighborhoods, are constantly afraid of such events and deem any catastrophic event as a sign of the coming of the Antichrist.

It’s all fear mongering. Yeah, there will be a doomsday at some point, all ages come to an end. Looking at the general state of this age though, hell let it come, I’ll grab a beer and watch.

Anyone wondered what the fucks happening in area 51

fear tactics of bay area is the next big earthquake is coming to sell survival stuff. It’s been going on for like 60 yrs. haha. no big one yet. If we go we go. don’t be so attach to your physical life. when it’s time , its time. Too many people live life out of fear of death that they aren’t living.

You mean Storm the Area 51 where people where going to go there to raid and got warned not to? I don’t blame them, people are fed up with today’s government bullshit.

It could be a conspiracy, for an example. Government, Nasa, etc. all say that UFOs aren’t real,and so on. And if anyone SEES them, no one would believe that person , and they get labeled crazy, then they get isolated, depressed, go to psychologist and a psycharist. Get drugs for neurons in your brain which FUCKS UP your natural system and shuts down any psychic development to know whats really going on.

lol… im just making stuff up but hell it could also be true.

Live with a narcissist who believes he is one of the hands of god to bring destruction to mankind; its annoying. He also constantly talks about big brother, control via microchips, and more. Maybe some of that crap will happen but I’m not likely able to stop it so I just don’t give a fuck anymore. Yeah, I hear of the mark of the beast and tech also. Man, I bet this is why Doom the FPS was popular. Doomsday was an ok mod but BRUTAL DOOM and Project BRUTALITY is damn nice.

And then there is the CHURCH. Some parts of the church are more free wheelin now and not so hard up with a pike up the arse like the dark ages but there are still those who absolutely preach this doomsday blather and watching sinners burn in the lake of fire.

Pretty damn gay (as in stupidly annoying), but w/e. In my views of the Hephaestan current fire burns and remolds the soul from the past experiences into a stronger form (perhaps incarnation though I’m not a fan of reincarnations). Hell could be an intense focused training as well.

I can’t imagine an existence where you get everything at an instance and never have strife at all. Fucking boring and what’s the point? Now, I haven’t lived fully in the current of fear/terror but when does one become immune or numb to that or any experience?

So yeah, terror and control by elitists is all this sounds like. I’d tell em to suck a bag of dicks and get lost but they prolly been there/are there/doin dat.

Totally dude. Fuck Bolsonaro for fucking the rainforest. I so wanna possess his ass.