I’ve got this old Persian Rug that the past owner unexplainably died on, it has several skull designs and long tongued monsters on it. The wife of the deceased passed it along to my mother, who passed it to me since I collect haunted things.

Sometimes when I stand on it I hear a deep voice asking what it is that I desire, but I’ve yet to give it an answer. Anyone here had any experience with a djinn? What were the outcomes?

Given the body on it, I’ll guess that there won’t be a good outcome but I don’t mind that. That’s not saying it’s a Djinn though, but given the area it came from it’s just a guess.

If it is a djinn, you need to be extremely careful. They can be unpredictable and dangerous, even if they’re benevolent.

If it is a Djinn bound to the rug

‍♂ just be wary as when working with / making your wish as often the out come isn’t what you really want.

Given the body on it, I’ll guess that there won’t be a good outcome but I don’t mind that.

That’s an interesting thing to say. Why would someone dying on it be ‘bad’?

If dead bodies were bad, wouldn’t the meat section of the supermarket be the direst of places to go? They’re not spiritually dangerous places as far as I know

Plus, it sounds like the entity you sense is not the past owner of that body. If the human dude went to simply feeding the entity, then the result you have is a stronger entity… which is what you want, right?

Bad in the sense of self preservation, which most people hold dear, but I don’t necessarily.

I know Djinn are quite unexpectable so its gonna take me some time to think of what I desire, as Hermes keeps me more than content these days

first I would like to know how you know it’s a Djinn? Even though owning a haunted authentic old Persian rug does sound like the best night I’ll ever have, I’m questioning because just like any other spirit there’s those that will try and mimic others.

But if you are 100% sure it is I would be carful like a lot said on here. Djinn isn’t some spirit that will grant you three wishes and leave. Djinn is basically as complex or possibly a bit more so then us human beings. Before you do anything with this spirit try and find out a bit more on Djinn (actual stuff and not the garbage that keeps being vomited out). While doing this try and see if you can find what kind they are and if possible what gender because yes gender does matter at least when talking to the spirit. Also, just be careful in general. Though there is some that enjoy human companionship and/or help you with something, there is always always a price. So be smart and do your research and stuff first before head diving into the Djinn world

I’ve actually been digging around on Djinn since it’s come into my possession (bout 6 months now) my Tibetan Terrier quite likes leaving treats on one of the monster looking things so I don’t get the feeling it’s completely harmful, but then again during a time when I was turning a alter into a giant astral projection totem to create temples in empty planes, Temple Guardian Lamassu, decided to jump into my terrier and since then his eyes reflect green instead of red, so there’s probably some mutual respect at play.

As for the gender, the voice is Male(unless female Djinn have deep voices) and slow. I called upon some trickster spirits last night that I’d helped before to see if any interactions would take place and it answered any responses with only questions to them (still no responses from me.) At some point there were pauses and responses from each party as if something else was being said or someone else entering the dialogue though I didn’t hear it. all questions asked to the spirits post interaction regarding unheard parties had the question passed over and the previous topic brought up.

The feeling felt similar to being an audience to a court hearing, two groups talking, with a 3rd unheard party making a decision. The invisible hand in the situation.

Most of the Djinn tales these days are quite trash I’ll agree, but one interesting one came from a talk with an ex private investigator that lead to him discussing a long period early in his career concerning a snuff film supposedly linked to a very rich mining family in the middle east. The video, which came on a tape reel showed a person being stabbed in the chest with a dagger as a group of black cloaked men pray around them in a candle lit mine and some shadows move around wildly as the blood is dripped into an object, this is repeated for several different people, all fall motionless and are positioned into a circle.
The rumor was that someone within the family had made a wish to be able to create more Djinn out of people if they were willing. The blood and soul would be mixed with a flammable liquid, readying the person for birth from flames, and the area of the ritual had to never be entered again unless to unleash a great evil, so the mines would be set for demolition immediately with bodies left inside. They supposedly made more money selling these vessels than the mining gig and were paying off the families of members who had died in a “mining related incident” huger payouts then in other accidents. Those in prayer had to be the closest friends to each sacrificed, and the one who turned in the tape to my very old investigator friend had taken part in the ritual but felt the need to expose it after the shadows did not come out of his friend who only sacrificed himself to care for his family. The investigators office was burned down, the attendee disappeared presumably dead, and he never touched the case after that leaving the country to Europe. His advice? Find an expert in identifying spirits, get a reputable broker, and get it sold to someone with Cancer thats dying regardless or watch Aladdin and wish for Robin William’s to be my forever Genie.

Well it told a bigger question.

“How fucked would you be if someone weaponized dyslexia?” 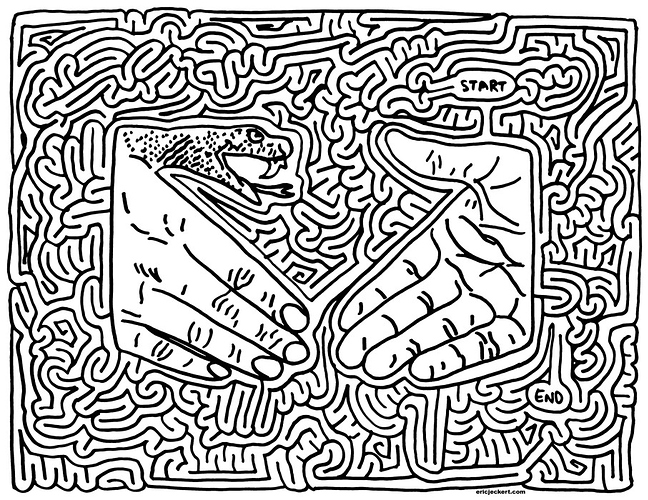