I just wanted to give you everyone a first hand look at what it looks like, when you invite spirits to allow things to completely turn things around.

I apologize for the badly typed texts Screenshot and post. I smoked a little weed, it’s been a while since I have, and well- my hearts bleeding.

I just feel like this an important lesson for someone out there, who doesn’t know what you can loose, and what you gain from this life.

My hearts bleeding and stand by it’s worth it. Let me know if you see why- or hell even if you can’t see it all let me know too.

Bare with me only half my images loaded 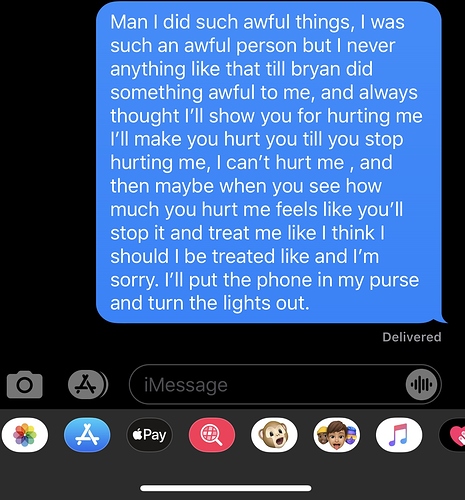 This person is politely telling you to fuck off. They don’t seem to want to hear any of that. Why do you keep messaging them?

As soon as they give you a non-responsive ‘it’s fine’ - that’s dude speak for ‘don’t be offended but please stfu’.

This is all stuff for women’s talk, men don’t do well with all the long drawn out examination of feels, it’s not you, it’s just now how they think - they want to solve problems with comms, not just wallow in it.

Leave him alone and move on. No good will come of any more of this. You’re just embarrasing yourself and will probably regret glurging later.

We didn’t separate, just taking space after a nasty argument. We actually spent time together after, I was just posting because a lot of people are scared to turn things upside down.

I’m saying it hurts. Here’s how it happens. But it’s worth it if you do it or get put through it.

I think, the long, long texts are more likely to push him away than help. Tell that shit to a girlfriend over a bottle of wine.

It’s a bit TMI for a pubiic website imo. Yeah growth tears people apart sometimes. Sometimes it allows others to be together… sometimes it lets you realise you don’t and never needed anyone, ever, anyway.

As soon as they give you a non-responsive ‘it’s fine’ - that’s dude speak for ‘don’t be offended but please stfu’.

This is all stuff for women’s talk, men don’t do well with all the long drawn out examination of feels, it’s not you, it’s just now how they think

Must be a heterosexual male thing

My son does it too, hates to read them then will ask me something and I’m like told you In a text.

I’m this case Justin knew I had gotten high because I’ve not slept since Saturday I’ve been so upset that I’m going to home to my kids and waiting for him to come but. Idk we’ve been living together and I’m just like this sucks going to be so far apart.

After i slept some we talked for two hours - he called me and I feel like ok. This sucks but I see all the things I’ve learned from it and I’m going to learn and well. I got exactly what I needed so the inner work sucks. But it’s good too.

Maybe. There are studies [citation needed, I got this from a book I no longer have with the citations in the back, called ‘A Billion Wicked Thoughts’] that show male and female brains activate differently on communication.

Men’s brains (in general) don’t have the reward centers light up the same way as women’s when chatting.

The result which is noticed by psychologists is that women will talk just to self-comfort - the act of talking itself IS the solution, even when it gets repetitive.
Conversely men use communication very specifically as a tool to solve problems.

So in the example above, it could be like this:

Never the twain shall meet.

TL;DR - if your guy is like this, talk to him always to a purpose that he can give a solution for, and don’t bother him with complaints he can’t provide clear help with. It’s just going to frustrate him, make him feel you’re not listening and that he can’t help you… which he won’t tell you… hence pushing him away.

I woke up yesterday morning to a welcome aboard The Empire Builder message. The trains name was not on my tickets- but I did find it on my email receipts when I was looking at lay over times- along with the other trains I will be on.

I was kinda startled by it, The boyfriend had spent quite a bit of time the night before reminding me this was only short term. I was going to set up our new home base, and begin building our empire.

I didn’t name the train. He didn’t see my emails- we were already apart when I paid for my ticket and even though we spent the day after together, I had no reason to show him my receipt and it was the last thing on our minds during our final moments together for the next few months.

I don’t believe in coincidence, yet how do you explain this other than some grand coincidence. Either way I took it as a positive sign that I couldn’t explain. He said it was almost as if we had planned it- yet we both knew we didn’t.

Things are going better than expected. It’s my second full day on the train, I’ve received many texts, a long dirty face time, and the perception has shifted from no promises to I’ll be there with you as soon as humanly possible.

I’ve even managed to glean a list of issues he doesn’t think he can abandon- things he has to tackle first, and the fears he has at moving 2600 miles when he’s never been outside of his state.

-Breaks down into
-Money Issues
-Car issues
-Family issues
-Not wanting to be homeless like I was at the start of this journey last March. I get it.

I know how handle/ manifest everything except the family issues. Those naturally are more complicated and are going to need to be broke down into simpler projects.

For some reason I’m not in rush to get to work until I’m settled after the trip. Imagine it’s always better to not rush anyways.

Funny, I figured forcing an ending to the alcohol struggle for him meant he would loose something, someone or a major trauma would occur. I thought I’d be his back bone to get through it, but seems he does have to learn to handle part of this on his own. I have my own lessons to take from it anyways. The shadow work here is astounding and a stronger wiser woman is going to come out of this.

I also managed to find someone who needed help on the train. Short story is he’s broke, on the train for longer than I will be and had nothing to eat or drink.

shrugs it has always helped me to help others.

Eventually, when I feel like it, I’ll write about what I did to shift his mind in the right direction. Today is not that day.

This is why I do it, this is why I accept and willing invite the forces of change in. They are scary and traumatic and awful, but they make me stronger. They make me believe in my abilities when results manifest over night or even better over the course of a conversation. They teach me how to be stronger and show me the direction to walk in order to be successful in my path.

The things that were inadvertently holding me back have fallen away, and soon I’ll find them replaced with even better.

I need to stop doubting my own readings. I threw two readings out completely Thursday night

. Both indicated I would have a lucrative opportunity come my way along this trip. How as that going to happen on a train, especially when I wasn’t looking for one.

That wasn’t the answer I was looking for or even the question I asked, but now that I’ve heard this opportunity, seems I would stupid not to take it.