Just stole this from one of the Reddit forums I am part of and thought it would be interesting to share here!! When you invoke God, Spirits or Demons, do you actually plead, request, pray or command?
command|593x500

Sadly many people including my own family weeps and cry when praying to God to get a request fulfilled and so is the scene in so many churches. Ever since I have started reading about the harnessing the power of the sub-conscious mind and creating my own reality, my mindset around prayers have changed. Would love to hear your thoughts. 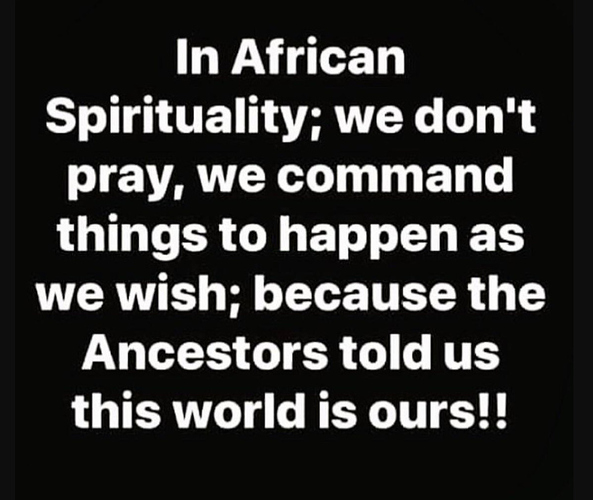 Big entities don’t have the obligation to do what we want them to do. Even the little demons or the angels that you think you command can turn their backs on you if you are asking for stupid things or if the great ones deem you unworthy. However, if you are strong enough to command reality by yourself, then do it, be a living god, but have a security system in order to prevent yourself from fucking up things that you should not mess with. That is the bigger service the demons and other entities give to advanced people. With all these super dark magician living gods, I thank the various pantheons because they keep them wasting their time on the internet and desperately trying to sell their products, instead of letting them destroy the world with their super dark living gods powers.

I either request/ask as a friend if it’s informal or propose a business deal if it’s a formal arrangement.

I don’t command because they are not my slaves and i find it disrespectful.

I also don’t pray or plea as this reminds me too much of religious doctrines and I’m not going to
degrade myself.

. I also will not tell others to command her.

I agree. I also find it disrespectful to command.

To me my approach is very much. “This is my will, my command. Your help is requested and appreciated as extra oomf.” Basically I treat everything as a solo project with the option to group up for mutual benefit. So I find a way to do it myself and ask for volunteers. These are my mentors, allies, and friends, I love and respect them, but I don’t worship in the traditional religious sense. I wouldn’t want to help a beggar in permanent victim mode either. If on the other hand I’m approached with an “How can I do this or be better myself?” Attitude, I’m very likely to help out as long as it’s something I’m not opposed to on a soul deep level.

I don’t believe in commanding, entities have their own minds and help us if THEY want to. I don’t think pleaing is the right way either. It makes us seem desperate and unable to do it ourselves. I don’t see the harm in praying, but my personal favorite it requesting. It’s not disrespectful and it makes you seem rational.

Commanding them through binding and coercive means consequently has costs, namely earning you their enmity, and these are often unimaginably powerful beings.

I would thus suggest invocation and working relationships as equal partners with the spirits whenever possible.

I only bindingly evoke entities I don’t trust and often have good reason to suspect wish me harm anyway.

Not into either as a general rule. There are exceptions for me, when the spirits themselves specifically request a certain devotional or commanding energy, and if I’m up for it, then I will.

Otherwise, I think it’s dumb to get wound up in ego either giving power away or trying to grasp it. It’s your universe, chillax and direct it the way you want, nice and easy. It’ll do it if your will is in alignment with your energy. If it’s not, fix yourself first.

The demons themselves have on multiple occasions told me I must COMMAND them. Not ask, not pray, not beg, not anything other than COMMAND. I’ve been yelled at by Azazel when I got disrespectful with him. My false self was throttled by Santa Muerte for being disrespectful. I’ve had my arse kicked by the Dead for being disrespectful. I’ve been chided by Lucifer for being slightly disrespectful. Guess what? None of these incidents occured when I was commanding them. They occured at other times. Not once have I had my arse kicked or been told off for commanding them. These are ancient and wise beings who truly understand the meaning of respect. They clearly don’t feel disrespected when commanded in the manner I described.

I used to find commanding to be disrespectful. But these days, I know that one can command another backed with full respect.

Commanding doesn’t mean you yell at them. Or bark orders at them. Or anything like that. Commanding isn’t the same as micromanaging, which is what spirits don’t like.

One can respectfully state a command quietly, intently, and with authority.

What is authority? It’s knowing for sure what you want, what you intend, that you have the right to make the change to your reality, and knowing that what you command will come to pass at some point.

Imagine you’re the captain of a starship. You have crew, and the senior ones are answerable to you. Think of how you would respectfully, calmly, and confidently give a command to any one of them, knowing your own authority.

You can command without viewing them as slaves or servants. But they did sign up to be of service, they enjoy getting to work, and as long as you recognise them for what they are and their power, and you treat them well, it’s fine.

It’s time to get over the whole idea of disrespecting them by commanding them.

Just stole this from one of the Reddit forums I am part of and thought it would be interesting to share here!!

African spirituality is often sacrifice based, you can research the human rights atrocity of muti murders, or if that freaks you out, ADR killings of chickens, etc.

I’d say any god what wants you to permanently sacrifice your power to them, needs to get your African Asian American European whatever the fuck else continents there are BOOT up its fucking ghosteh ARSE pretty damned quick.

Then work out how to proceed to power.

Yes, a magician wrote “The dentist doesn’t pray, waiting for caries to fall by itself” and another one “In magick it is necessary to contact an entity, and not to pray God”.
Crowley in Liber Librae also said to definitely command spirits (even that one may resort to the curses, but let’s put it this way… for good measure it’s better to stop at commanding).

I honestly don’t know just by reading this and other accounts. Don’t get steamrolled but don’t be an asshole is what I’m seeing. Perhaps its true many spirits won’t work with whom they believe is utterly unworthy if they have nothing under their belt. I’m of the mind also that if NO spirit ever gives you a chance or two if you keep failing but are trying then it seems almost tantamount for many to fail. Maybe that’s the culling process. I might utterly fail in my route or approach. And maybe I’ll fail in many approaches and just further the gap to work with spirits if they see me as not worth the time when there are sooooo many human occultist or prospects to work with. I’d think they’d want the youngest possible and that older humans might just not be worth it if they have no position of power on our earthly plane. They ain’t gong to rummage through crap at a garage sale when they can pick and choose from the elite class shops.

Maybe when you work from desperation then that’s a huge red flag with most spirits. It makes me wonder. And is gauging a single life time being on that scale of pass or fail the only chance one has? Kinda sucks if its a one shot and that’s it.

Hiya OP! I’m very much in agreement with what @silverfirefly wrote; unless you’re specifically asking them for advice, guidance, or opinions, commands are the way to approach these things- a human being on its own doesn’t have much if any spiritual authority, it’s when the full self is realized and your authority interlocks with that of their boss/creator/elder that commands go from a child flailing wildly to something that they are compelled to obey. This is where the book as a magical tool comes from, that is, recording the oaths and seals of the spirits taken while exercising authority over them for them to serve you unquestionably and invariably. Prayers, in the form of spoken invocations of authority over the being, are much more effective than just asking, and when commands are supplemented with offerings and prayers the magic is a great deal more powerful than it would be even with the being on its own. People assume commanding is disrespectful, but, unless there’s a real reason to specifically disrespectfully order a spirit, it isn’t- it’s just being direct about what they will do as a part of your reality tunnel!