I enjoy painting and i was wondering if there is some spirit that can help me create magically inspired paintings or do you know of other ways to combine magical tecniques into the painting process? To make them magnetically attractive to people and make them sell better.

Attatched is one i made mixing my blood with the paint. It does have a certain power to it different from other paintings. I would like to know if there are other things i can do to further strenghten my paintings:) 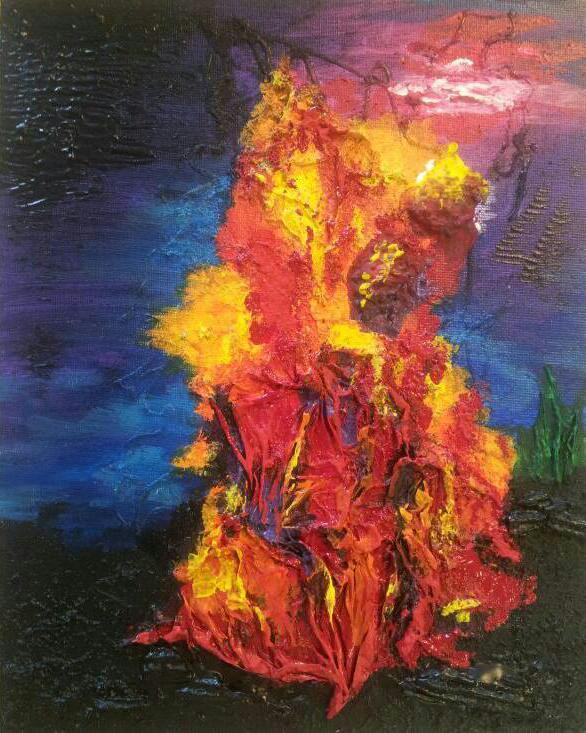 This one looks great actually for me.
I had success within make people lust for something or me.

I would suggest in this case working with Fire. Elemental Magic you can do it by your own, you dont need any spirit. You are already one. Just charge the painting with spiritual power.

Clauneck can help you on that, to attract people to enjoy them a lot and buy them.

Isabell, I’m also a painter, so I can relate. Nice to see another artist around these parts.

I’ve had success with previous paintings by using the Mercurial current. I simply draw out Agrippa’s planetary seal of Mercury ( http://upload.wikimedia.org/wikipedia/commons/8/87/Agrippa-MercurySeal.png ) and open it as with any spirit sigil. Feel the Mercurial spirits gather around you and project your intention into the seal. Verbally state your desire and thank the spirits for their assistance.

While painting, I would bring the seal out and place it underneath a blue or orange candle and let it burn for the duration of my session. After you’re done, simply tuck the seal somewhere out of sight.

Give it a try. I plan to work with more Mercurial spirits directly, such as the Olympic spirit Ophiel, but I haven’t as of yet.

Divinator, Clauneck sounds like a great option as well. Thanks for the info.

in the Disney school of Animation it seems they work on how a single arcing line can have character and vibrant emotion (just by how you feel- infuses it… not just that simple concept, but working to develop it)…

but further the Celtic (and Taoist) Traditions have ways that develop a skill (to “an artform”) of holding a particular vibration /mind-space and creating within that… (which not only subtly affects- but shouldn’t be noticable- as the key is that Vibration seems to be awakened and infused into the Observer, or listener if is Spoken sooth)…

There are systems that create paintings, that students (or buyers) look at and just the viewing is like a Transmission-satsang (and thereby upgrade illum)… (which also radiate an affect upon a space, even if covered and not known to have been placed there- although opins may vary on that)

In both I mention R Kirk Packwood as his Memetic Magic title is interesting in quite a few ways to me (it is in regards to the use of “auto” painting/sketch by flow-squiggle as the Evoking-Contact itself… bad explanation, but can only sum in a phrase so much

-the idea of been working on, a viewpt (what is Seen from a particular “coming from” mindspace) not just the literally viewed, but the finer distinctions so that viewing the viewer subcon adjusts to also see from that viewpt (and thus changes the con from within).

===
[last brings to mind painter Alex Grey, as well as the Visionaries in the Vedic traditions that portray the Subtle realms that a Clair-voy SEEs… not so much in the specifics, as that may not be your range… but more so I’d think if you want to not imitate that, (so duplication is less to arise) but rather how to show what IS your AHA such that that Hidden-Inserted aspect affects

(thus can be used directly for the viewer, but to Integrate this with the above… this can be Directed to the probability-fluxes, so that is would cause your Arte to be drawn towards certain conditions (have those be conditions- by drawn to those willing and able to happily pay much for

and then draw other Works of Yours to join it as well.

(my attempt at a short msg became longer- but last thought, the tradition of Items of Power that seems to not be as often in Fiction (or Historical-Tales) such that enough Magic is in something that it guides conditions around it… and at times these Items Journey and Gather together… luck

I am not painter but I think that any kind of spirit can help you, just contact one of them and ask to give you a vision according to the sphere of influence of that particular spirit then transform the vision in a paint, even the spirit can express itself through you.

Thank you all for your great advices!

Hmm i wonder if there are some spirits who would like their portraits done, that might be fun when my skills have increased a bit…

I’m a professional musician by trade and have used Belial to help with social intrusion on new music scenes. He has been more than helpful in delivering me new gigs, and contacts in the industry. You may try summoning him for social intrusion of the art world.