Another member of the Unholy Saints, Catherine Deshayes, also known as La Voisin, whose married named was Montvoisin, reigned as Queen of Witches, during the reign of the Sun King. La Voisin was the ruler of a network of witches, fortune tellers and magic practictioners. Call upon this Unholy Saint when in need of guidance while walking the darker paths of witchcraft, for knowledge and wisdom of poisonous herbs & for strength when being targeted by others due to your chosen path & belief system. La Voisin can also help with leadership skills & confidence, especially for those who lead a coven, as well as guiding those who wish to begin one. Also The Queen Of Satantic Witches, can help in divination, chiromancy, herbal magic and creating aphrodisiacs.

I do believe La Voisin, deserves to be respected and revered as she could almost be acknowledged as the first satantic witch, definitely one of the first to rise to a position of great power. 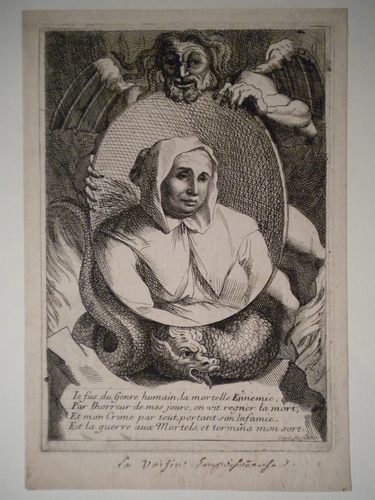 A bit about La Voisin, her life & her practice:

Catherine married Antoine Montvoisin, a jeweller and silk merchant, whom she was said to have attempted to kill several times. When Antoine’s business failed, to support a family of six, she began offering magical services, such as chiromancy and face-reading.
She claimed her powers were a gift from God, & that she was taught fortune telling at the age of nine, although she would scoff at a priest before her execution.
Becoming a powerful woman, La Voisin rose rapidly through the ranks of witches, gaining clients among the highest aristocracy, while ruling a network of witches, providing poisons, abortions, aphrodisiacs & magical services (such as amulets/talismans, devils pacts, curses, love spells/potions, lost and found rituals, etc).
Catherine Trianon was her notable poison provider and Catherine Lepere acted as her clients abortionist.
Privately La Voisin enjoyed a fondess for wine, as well as many loves, including an executioner, a count, an alchemist, architect & a magician.
La Voisin arranged Black Masses, which included sacrifices, scriptures read backwards, offerings to the Devil, along with evocations and invocations of Satan and his demons.
Other rituals, often included sheep and pigeon hearts, as well as ‘burning the faggot’ which was using a log to represent someone in mind, body and soul, then burning it while repeated incantations. The represented person would suffer until fulfilling the clients desires.
Wax dolls were often used by the Witch Queen, for exemple, when a male client wanted to obtain marriage with a particular woman, one would be made of the male and buried in the womans yard to bring it about.
Hoping to cause her husbands death, La Voisin and a lover buried a sheeps heart in their yard, only for her to lose her nerve when Antoine was struck with stomach pains, causing her to dig it back up.

Let us not forget our witch ancestors.

La Voisin arranged Black Masses, which included sacrifices, scriptures read backwards, offerings to the Devil, along with evocations and invocations of Satan and his demons.

I have read it… Absolutely love that book