I found that I was able to completely neutralize Jehova’s power to mess with me with this simple working.

1)First write it’s name in Hebrew (YHVH) backwards on a piece of paper. Should be written from left to right to do it right.
2)Next write “Forget My Name” underneath it, as the goal is to have Jehova completely forget you so he cannot cause you anymore harm.
3) use a razor blade or your preferred method to draw your own blood, and put your blood over the Hebrew characters. This is binding him to your will. Depending on the severity of your case, you may get an audible reaction. I did.
4)Keep this piece of paper in a safe place where it will not be damaged or get lost, or you will have to make a brand new one.
Here is an example: 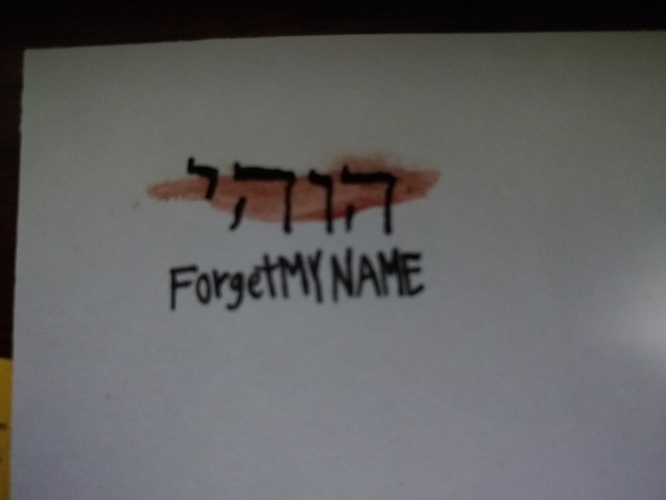 This working must not be for you then. I’m glad you don’t have to deal with those problems. I am a practicing Satanist living in a Christian home. There are unique paranormal problems here that don’t happen to a lot of people.

This is a basic working. Please feel free to add to it with what works for you. Maybe turn it into a proper talisman?

He is a false god. EA, the Lord of this world is the source. Scared Jehova’s days may be numbered?

Never open that piece of paper. For you will lose

i feel like most people who think like you are just overthinking it and putting way too much fault on the Judaic God for stuff, I am not a negative person and try to treat everyone equally, however, this is in my opinion a waste of your time, if Jehova is actually causing you harm and it isnt just your mind purposely trying to seek a connection (could be an impostor spirit) Id just talk to Lucifer about it, provided you have a good enough relationship with Lucifer so that you can talk to him with no problem, if you do have difficulty calling Lucifer or knowing if its him, try asking the name after summoning, the true Being you summon will tell you his or her name, an impostor cannot.

I think he means Ea, aka Enki. Sumerian god of creation. Not E.A. the human author.

While I agree that title is a bit of triggering to some, I dont see anything wrong with the post to get jumped on.

Jehova’s power to mess with me

have Jehova completely forget you so he cannot cause you anymore harm.

While I have no qualms about anyone binding whatever spirit they choose I am curious to know how Jehovah has been messing with and hurt you. Jehovah is God, and does not harm us. What has happened in your life that makes you believe this?

Again, I’m not disagreeing with your decision, I’m just curious about your motivation.

What has happened in your life to make you believe that?

You are partly right, J is a God, but inaction when action is possible and situation is known is the same as purposeful causing of the situation.

When I worked at the prison, there was a term called willful ignorance, in which if you were aware that an inmate was being beaten or raped oh, and you allowed it to happen, then you would be as much at fault as the offending party.

When I had a gun held to my own head oh, and my light was darkest, he did not lift a finger, Lucifer stepped up, and transformed my suicidal ideation into abject rage.

I have no true animosity towards J, however, I showed him the same amount of courtesy that he showed me. I may take part in this ritual.

What has happened in your life to make you believe that?

I don’t answer questions with questions. If you would like an answer to your question then first you will answer mine. If you choose not to that up to you.

term called willful ignorance, in which if you were aware that an inmate was being beaten or raped oh, and you allowed it to happen, then you would be as much at fault as the offending party.

Well the willfull ignorance of men can, in no way, be compared to the “precievied” indifference of God.

When I had a gun held to my own head oh, and my light was darkest, he did not lift a finger

In regards to you believing a finger was not lifted when your light was darkest you may want to read: Footprints…

God is a God of allowing. If he were not then we would not have free will. It cannot be both ways.

Lucifer is not an allowing god. Lucifer takes away the free will of and hurts his victims with baneful acts.

And in the grand scheme of the sum total of reality, it is only the one GodHead who knows why he doesn’t lift fingers sometimes. If you are not omnipotent then you cannot judge why he does and does not do what he does.

Do you know if karma and reincarnation are real things? If you don’t, then you cannot say why that man put a gun to your head. What if it was karma. Maybe in a past life you killed a bunch of people. Or maybe you held people up at gun point yourself. Maybe you never learned how terrifying that was to someone else until Jehovah God made you experience it for yourself. If not you would never grow, develop empathy and ascend.

Or what if Jehovah needed to keep a woman from getting mugged and raped by that same man who held you up. And since Jehovah is omnipotent maybe he knew for a fact that the man who held you up wasn’t going to kill you at all so he put that man in your path instead of the woman because he knew you would be okay but that the woman would have been MurderDeathKilled?

Have you ever considered any of those possibilities?

Did you ever think maybe things are happening just the way they are suppose to and everything that happens to you is to help you grow?

And that there no such things other then that which you perceive. You have not suffered unless you believe yourself to have…

Just my opinion. And btw, I work with Angels and Demons so know that IDGAF, no judgements. Just food for thought.

Woah…hold up…A razor? Dude (or dudette) …um isn’t kinda extreme to self mutilate to stick to to the Yod…???USE LANCETS…

In drug stores they have lancets for diabetics…If u wish to draw the MOST blood, u want to prick either the ring or middle finger on the part of the finger closest to the thumb,and dig in and press it against the finger bone…hold it against the bone for 10 second, pull it and talk about blood…I used to cut, but a lancet on the right part of the ring or middle finger will yeild more blood than even a cut requiring stitches.

U could also call upon Chavayoth , Heh Vau Heh Yod,El Acher, Hahamahatabawanahada’at, and Deus Alienus (also El Archer) . This is all the same thing, the inversion of Tetragrammaton…

I wish you well on your path.

We can agree to disagree, peacefully, regardless of how off kilter your belief is in my eyes. No judgements your way, either.

I’ll leave it at that. Best of luck.

Lucifer is not an allowing god. Lucifer takes away the free will of and hurts his victims with baneful acts.

Also, you may wish to speak with Lucifer regarding this extremely wrong course of thought.

Well my course of thought being wrong is just your erroneous opinion. You’re allowed it.

But as you said:

We can agree to disagree

you may wish to speak with Lucifer

Yall have a nice day now ya hear

The Black Lodge will be victorious and jehovas death is soon to be a fact!!!