Been given my 'wings'

I’ve been doing alot of work these last few weeks, last night was my most successful session in many ways both in manifesting & personal attitude/confidence & mental state… came to the stables today (my bit is “private” so noone else goes on the land) and on a path I’ve walked a million time was laying an “air training corps” badge!
I knew I was on the right track already from the steady progress but its nice to be given a sign 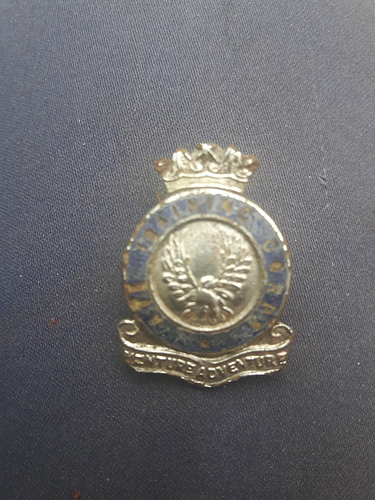 Oh, its just a lapel pin… the person who had it would have lost it 60+ years ago and been given another - its not like a medal

No 60 years ago and it would be much more tarnished and rusty. So you don’t know that.

The point was, what if this was your opportunity to meet someone, prove something, of just set energy along certain lines? Like, choosing or not choosing to partake of the thief archetype? Either could be right for you, but when you read the stories, there’s a certain reward in returning lost valuables… it’s a magik thing and very often a faery thing. Having been a first class air cadet, this counts as a valuable.

Hence, invitation. Invitations can always be declined of course, but is that your true intent?

hmm, i do get what your saying, i checked on ebay and they have little value, the military did do training on the land in the mid 1900’s but theres been no one since… im happy with my initial impression - that it was uncovered as a sign of my progress,

even if it did have sentimental value of some kind any owner would be untraceable due to the are being training grounds , with literally hundreds and hundreds of transient service men in the area over the last 100 years ( i am near to aldershot which was the home of the british army)

if it were an actual medal then of course it would be different!

No, not a human treasure, I think you’re thinking mundane, and it’s not… maybe sentimental, but I more meant faery treasure, maybe I’m wrong about them being behind it’s appearance, but I though I sensed their mark on it.
… to find the actual owner via magic would be cool and good practice, but I also had a feeling that the owner was someone worth meeting, and the fae are tricky but an invitation to work with them is fantastic.

If I’m wrong, nothing will happen and you’ll keep it fine, it’s a cute sign, no deeper layers to unravel…
If I’m right, and it’s fae and you don’t handle it to their satisfaction, it could bring bad luck. At best one day you just won’t be able to find it, it’ll disappear the way it came.

I’d not thought about that at all … we do have a tree spirit that makes its presence very known, and i have taken to meditating in a clearing there, infact i had had an experience of white mists coming the other day.

Thank you, I will see if i have a shiny thing i can give them in return, perhaps that will be appropriate ?

I’m sure whatever you feel drawn to give them would work, and they might be trying to influence you. The last time they wanted an offering from me it was cupcakes with icing

The traditional saucer of milk and/or nice bit of bread always works in a pinch.