This is more a generalized thread but i have had the rite of deification done for me by @J.A.Ragnarson awesome ritual thank you again but im being pulled to do a lot of work i.e soul travel, banishings,curses, divination but how does one actually banish energy by getting in tune with their atman or omniscient self i would rather do this then to waste time on calling a spirit when i have so muchh that i learned through reading in this forum, the spirits literally speak to me through people to instruct me because i have always had my intuition tell me so, and i should be stepping up the plate with my godself since i have knowledge of soul travel so how can this be done by connecting to the atman the possibilities are endless with this i would love to hear real applicable advice

@prynce
Go into Soul Travel right now. Focus on your Atman. Go to him. Become him.
Come back to your body, and banish.

This has a twofold effect of Liberating you, AND making you self sufficient

Essentially you assume your Atman like you Assume a Godform.
MERGE with atman. You will become liberated by doing this.
Attachment will be annihilated and you wont have to call on a spirit unless you want to

I am not familiar with soul travel, so my nothing becomes something through use of my mind and my index finger. I point my finger at a particular point in front of me, and visualize a lime of flame. I draw five such lines all connected, and thrust it to the far reaches of the universenamd utter a divine name, and swivel right to face another direction, do the same pattern with a different godname, and so on until a circle is cast, and utter an incantation, and conclude it with visualizing four archangels, one in each four directions wearing a certain colored robe.

Interesting occurence: usually im a very reactive person. I did a banishing ritual by connecting to my atman and for two days in a row now there was 2 fights on seperate days with every place i inexplicably visited, yet i was unaffected by any of it. This has a mirror effect where i am actually seeing my old behaviour in others, and on a second note it is the first banishing ritual i have done in years but it was not done easily or quickly

The beauty of the Lesser Ritual of the Pentagram.

I know a lot of our teachniques go away from general techniques, yet, i found that similar to sigils which just posess a certain link, the banishing rituals from Golden Dawn are quite useful.
I personally usualy use my altered form of it.
The standard version is casting a pentagram in all 4 directions - north, east, south, west,
and having their relative angels evoked to stand as protective guards in that directions.
Urie, Gabriel, Michael, and Raphael. 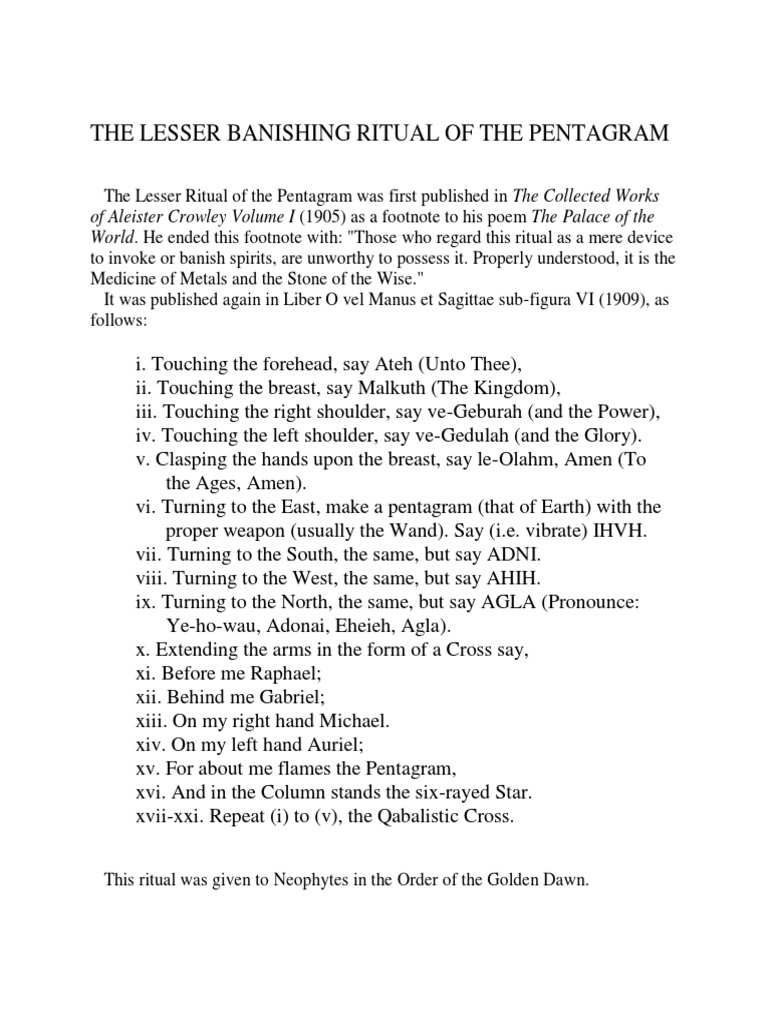 THE LESSER BANISHING RITUAL OF THE PENTAGRAM.pdf | Archangel | Magick...

Scribd is the world's largest social reading and publishing site.

The Dark version of that is inverted pentagrams and conjuring Belial, Abbadon, Amamaymon and Zagan (according to E.A.'s version, hence reseurch the exact names if you want his exact guideline.)
King of the East: Amaymon
King of the West: Corson
King of the North: Ziminiar
King of the South: Gaap
-are the official Wiki version.

Now, my version ignores the naming out of Deitys, i linked them up long ago.
I just draw the tenpointed Star. (Pentagram+inverted Pentagram overlapping.)
Which is a direct emination of the Quaballah aswell, actually even merging the tree of life and the tree of death,
That Star, i usually draw in one of 3 forms:
a Hand Sigil, which i wear as a talisman / Spell / Sphere (very usefull for manipulating gravity, i use it most times when walking stair upwards to be nearly as fast as if i was walking downwards.

)
As a Shield, casted in front or around me.
as a Circle, casted on the Ground.
Note that especially the hand version just uses chi, no physical tools.
The Circle version, Cornflour / Salt / Graveearth are useful Physical empowerments.
(Cornflour for Vodoun, Salt general Casting, Graveearth Necromancy. )

The beauty of the Lesser Ritual of the Pentagram.

Thanks, i apriciate it! xD

In my times of coven I developed my own system. As I live in the south hemisphere (Brazil) and I walk the “austral wheel” (southern wheel) I start at East (air), then North (fire), West (water), South (earth) and East again because the apparent movement of stars (Sun, Moon, planets also) in the south hemisphere is from right to left (counterclockwise).

Also pentagrams were drawn accordingly with that, following the counterclockwise movement, which we called “key and lock principle”. Open = right to left, close = left to right.