Azazel streaming 25 jan. , the aftermath from 21 jan. What was your experience?

What was everybodys experience from watching the video of the ritual binding to Azazel?

I just watched it in a deep state and at one point when e.a. said that we were all there with him, I felt a huge energy going through my head and body, anyone else?

Two rites with Azazel on the 20th and 21st were intense as hell and left me wiped the fuck out, as though very hungover, for a day or two after. There was a lot of astral activity when watching the video — soul traveling to the temple and interacting with Azazel amongst shadowy figures — but it seemed mostly to be a reaffirmation of what had already occurred.

It is hard to put into words what actually happened. EA’s journey to Mimas was extremely powerful and Azazel 's presence was by far the strongest I have felt so far. I saw my shadow body and hand of darkness and when I received my weapon I was really surprised as it is totally different to the gifts I received on the 21st, some of which have already been channelled artistically and given their purpose. The sword I received tonight is huge, it is black and made of metal forged flames. The hilt is encrusted with sapphires which have an inner glow. It has already been used twice under Azazel’s watch, by way of him training me how to use it. It was pretty simple, however it involves a specific movement and sound to activate it. After using it, my sword morphed into me and is now an inseparable part of me. I was in a trance for awhile after receiving the sword, my experience was so powerful A disappearance of form and mind, just heart beingness. JS’s video was also very powerful. It was wonderful to see how different each rite was and to feel the combined energy and power of the workings and everyone involved. In JS’s video, the most powerful part for me was the evocation of Satan. I felt him here with me in my apartment whilst experiencing the video footage of his rite so strongly that I was partially possessed, in that Satan was inside my energy field and physical form and our energies were blending. I am not sure what happened in a way that I can articulate much better than this, however I know that my life will never be the same again. Something has shifted big time for the better. A big thank you to EA, JS and everyone who worked so hard to put this rite and the video together. 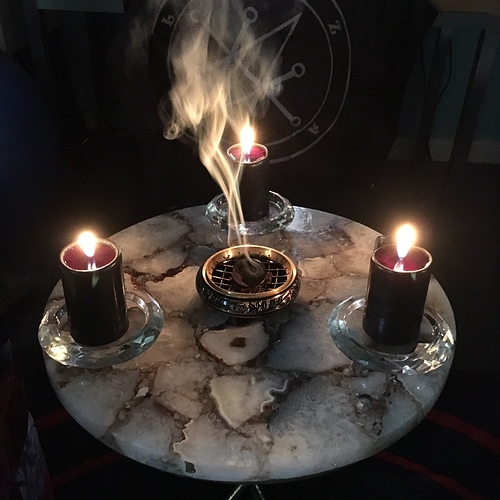 This explains the weird feelings lately!

I didn’t watch it but I did Meditate on Azazel yesterday. He showed up in a brighter form and gave me a good message.

During the last few weeks I have not been doing any rituals. I had taken a ‘break’ from the occult for a while. During the January 21 eclipse I was deep asleep, I did not even know that there was an eclipse tonight. I suddenly got woke up at around 3:00AM by something. I immediately got a feeling that I should do something immediately. So I ran up the stairs and into my roof and started meditating under the moon. The entity calling me was none other than Azazel. His power was incredible. I have never seen anything like this ever. I have worked with many demonic Kings and Djinns. But the power pouring out of Azazel on that particular night was incredible. NOTHING could compare with it. This was the most powerful entity I ever worked with, it was as if I was working with a new version of Azazel. The power made me scared and terrified. I am lucky I am in alliance with the demonic realm.

So during the meditation… I worked through all my goals and could feel them manifesting and experienced them in real time during trance. And the results have been incredible. Rituals I did years ago started manifesting after that night out of nowhere. I am incredibly happy with the results and I would like to thank Azazel a thousand times. He is the ultimate God and he is an incredible bro - protective, caring and motivating. Thank you for bringing me back into the game.