Author of ebooks about magick

Yes. Have a fbpage. Patreon page and a dvd 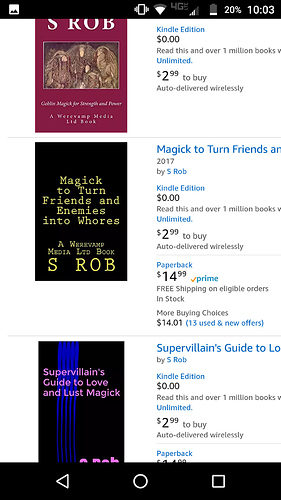 Kkkkk He has beautiful titles

I have a bunch of his books. They are pretty much all alike. They are very poorly written and for a native English speaker, his grammar is atrocious. His “system,” if you can call it that, as far as I can tell, is intention based. He tells the reader, “if you believe the spell will work, then it will.” That is the only direction he ever gives. Each book has an incantation where you invoke a “doorway” entity to open the way for another entity that will do whatever job that particular book is based around. The same incantation is used throughout each book, He mixes pantheons and the doorway entity may or may not be part of the same system as the second entity. For example, in one book he uses Papa Legba as the opener of the way for Ti-Jean-Petro, and in another he uses Janus for Caesar Mammon, and in still another he uses Elegua to open for Oshun.

Interesting - I guess that’s a bit like the use of various spirits, and Hebrew words to command them, in New Avatar Power?

It’s a little like NAP, I guess, but unlike NAP, there is no self hypnosis for getting into an altered state. He just gives the incantation, poorly written as it is.

I have found his Fountain of Youth Magick book and his immortality and Age Manipulation Handbook of interest, though, as they are essentially astral travels. In Fountain of Youth, you are travelling to the fountain and invoking various beings to add their power to the water, and in Immortality, you journey to various long lived figures of history and myth, like Methuselah and Saint Germain for advice on becoming immortal.

I have a few of his books, most attractive one to me was “kill even in the spirit world”. He describes how you can permanently destroy someone’s soul by throwing it inside a snake entity which resides somewhere in the atral or something. He says that if you do this it causes second death, meaning the person just stop existing. There’s no more reincarnation or anything. I find that difficult to believe nonetheless…

Brb turning everyone into sexcrazed whores.

In terms of results, what do you have to say about his books?

I have only tried one incantation from his Money Magick for Supervillains book and the result was absolutely zero. Zero presence, zero results. Felt nothing and saw nothing.

Brb turning everyone into sexcrazed whores.

i thought we already were

Brb turning everyone into sexcrazed whores

Oh if only I lived near you

RESULTS from working the spellwork. That is all I care about. Atrocious writing, poor grammar— whatever. i have found that Asthetics in literature is as important as paint on a pig. What has been ones Results and Experiance when the spells are put into work ?? That then is really only half of the equasion— one may get nothing, One may get everything. The practioner is most of the issue. Compared to other works and tomes— what are the results or experiance? Final issue for me is; Does anyone ever stick stricktly with the 'set of instructions ? or do they do what i would ASSume most veteran sorcerors do and take the data, and Fold it in with their own techniques in order to get the desired results?? I have heard E.A. say many times, [paraphrase] " you have to go through 1000’s of texts in order to find so much as one word or sentance which is worth [or hidden] to implement " . So in this regard, All of S.Rob’s stuff is as efficasious as anyone else.
So i would recommend, seeing his products as “Small streams” with Particular currents from which to pan for whatever dust or nuggets which one would be able to integrate into their workings. not to forget the fact that - at least in my experiance, i may read something today which would hit me in every way like a fresh bullshit in the face; only to have it brought to my mind years later to fit perfectly in a design for which it will enhance or empower a State of Being which would never have crossed my mind any other way. IMO, “magick” is very little where you read it and everything in which You Make It.
So I reask the question. Who has obtained any of his works, and if so-- did you work it, and were there acceptable results? Every year I plant about 100 pot seeds— when harvest time comes, i may have less than a dozen plants , But I am always happy for them.
Were I to have tossed out E.A.'s works because some non achieving NON WORKING his instructions; i would not be here today. Thanks E.A. for the Wonderous blessings you have opened one of many floodgates for, as well as his detractors who in every case has had enough energy to bitch about— but not enough to put into practice.
So- S. Rob… any worthwhile experiances from working to data he puts foreward ??
Aslo, Hey, E.A. how about you interview him ? [of course when you can find time, you produce more tham a bee with 2 butts ! ] Speed and Power to all!!