Does anyone have any advice for rituals or things to research to help me attract friends/network? Just a bit of a background, I’ve struggled with self confidence issues for my whole life, but I recently entered into a pact (Brigid/Lucifer/Morrigan collectively) and since I have seen a lot of major results in my life, my boost in confidence just being one of them. My family and I are in a really tight spot financial wise and I am trying to find a new job in a completely unrelated field (software development from retail). My research led me to Bume and I evoked (invoked? still new so learning the terminology) last night and feel I got a response so I was heard, so I know things are moving the right direction.

The problem is this, I’m not the type to sit idly by and wait for things to happen without putting the work in myself. I know networking/ making friends will help me in all aspects of my life, but to be quite honest I don’t know how. This is the first time in my life that I’ve felt sure enough about myself to even try so this is whole new territory for me and I’m trying to learn. Is there a ritual or direction that I can look to help me learn what I need to do? I’m more than willing to put in the effort to get where I want, the problem is currently I don’t even know which way to go. Any help is greatly appreciated.

EDIT:Fixed formatting so its readable

Hello, this is something I started to work on more myself not too long ago. There was a large moment of transition in my life back in August, and I wanted to meet new friends and potential work colleagues, especially since I would be moving in new circles. Prior to beginning these new classes, I performed some rituals with Lucifer to encourage chance encounters with new people, and some to generally improve my social skills and likability (I wanted to be on my A-game, especially since I was planning to meet new kinds of people).

My results from these summonings have been quite good. There have been several times where I just so happened to choose the right spot to sit or stand, or the right time to arrive somewhere, or other such things that lead me to meeting cool, smart, and often well-connected people. I’ve also been able to re-connect with some people I’d known before, and I have also met some new friends at completely unexpected times, by going to places where I enjoy spending my leisure time.

Try Halah’thor from the Book of Azazel.
I evoked him last summer for a freind and he manifested the perfect job for her within 3 months after she’d been struggling for years, and possibly a love interest to boot. I’m forever grateful and so happy for her, I hope he can help you too.

Also try meetup.com for IT networking, and get online training for your chosen area to get current dates with current IT skills on your resume. 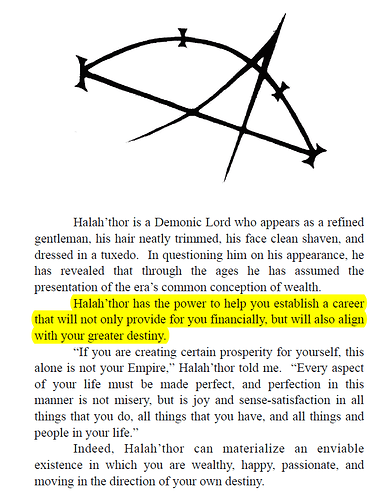 Thank you, I appreciate it

You could call Saspu, the Angel of Love and Friendship, for help to widen your social circle.

Thank you, that’s a great help. I’ll check them both out.

I’ll do some research and try it, thank you!

I did a search and didn’t see a sigil (unless I just flat missed the thread), would you mind giving me a direction where to look?

Some tips for you:

Grab Inner Alchemy by Gallery Of Magick, and do each area within yourself you’d like to change: Ie: Inner confidence, aura etc. You’ll find that once you release blockages within you- then your outside circumstances change. They have an amazing write up here about how to start at the bottom and work your way up. Kind of like building a house: https://galleryofmagick.com/2019/10/14/the-magickal-spectrum/

For money- There are TONS of ways to make money online. I mean tons-it’s not BS either. Check out a guy named Franklin Hatchet on Youtube. If you are really one that doesnt want to wait around while you find new work start with his methods on making money online with no Capital. https://www.youtube.com/watch?v=DHNlAKuPrJo ( i just grabbed a random video. Go through them. Some of his videos aren’t just making money online they are ideas that you can be doing on your own. Watch like 20 vids. See what resonates and just act on it)

A smart goal for you would be to apply his methods alongside of having a job with the goal of letting go of that job and making money full time online.

You can also start selling stuff around your house now on apps like Mercari. Its just an app for your phone. Take a picture, and list.

Thank you for the info, I will look into it all.

I was gonna make my own topic on this, but I think I’m gonna weigh in on this one and share my own story.

Generally, I’m very social by nature. I look for places on my own, travel to them, and am usually the one approaching people. But I don’t get many successes. Mostly because I believe I make people uncomfortable. After my family’s move down South, I began going to a community college. I have enough difficulty with regular people my age, but the school includes early college teens. So, my anxiety took over. I basically avoid people at school because I don’t know how old anyone is. I feel the need to social distance myself from people. However, not only am I going against my own nature, but I’m also not putting myself in a situation where I can really meet anyone.

I can go to places outside of school, but I never really know when to approach people, how to, or even if I should. I occasionally go to open mic nights, but I don’t think they’re working.

I’m currently looking at Planetary work and invoking the powers of Mercury and Venus. But I’d also appreciate some other suggestions. My goal with the work is that whatever powers I invoke will simply PROVIDE situations where making friends is plausible, instead of me forcing them, and to have people approach me instead of me approaching them. Though the first is what I consider the most important if I can’t have the second just yet.

Sitri is excellent ( he bit too excellent) for attracting people from the other sexe. Don’t hesitate to call upon him. Sitri is the master of the Game when it comes to human relationships.
In order to have a dominant aura on men, I suggest Satanachia. This demon is said to modify your pheromone system to make you more attractive to both males and females and give you the “alpha” vib’.

Combining this two will transform your social interactions for sur.