INTRO: I must clarify that I haven’t achieve clairvoyance nor clairaudience, in particular not back then in January of 2017 when this happened. I used weed as a crutch to take advantage of the opportunity that came at an auspicious time, a raw obsidian stone came into my possession a month before, I felt it was “alive” since I touched it, smelling of copal essence, and a friend was the personification of smoking weed every day so I wanted to try something new with this acquisition. To order this experience the description will look like this with my observations and interpretations below. Any information or contribution of your own gnosis to better understand this, the system that represents this onion-like structure or the known names of the spheres, contradictions or things you found interesting. This feels like instead of asking a simple question I go “What is this book about?” and I throw it to your face and for that I apologise, that´s not my intention, if you read it all or just a part I deeply appreciate it in advance for your time, and that at least it has been entertaining.

#) After that fun experience and the grief has pass, it came to my realization that I was just looking trough one window of many that were open, each showing specific parts of the travel. Wanting to do something different to calm the humor, I returned to the room where my body was. The song my friend put on was ending, and I kept my eyes closed, sitting on the chair, seeing around there were black translucent spots moving about, shadows that approached and moved away with my breathing. I focused on working my chakras, started by the sacrum, scarlet red and spinning with its light, but it seemed stained with black shadows in some parts, so I tried to rotate it faster and vibrate at a higher frequency, then follow the way from the lower spine up finishing the process from top to bottom to mobilize its flow. or that was my intention when I reached the level of the stomach, I was literally pushing up what I had eaten before. A sense of hurry invaded me as I knew what was about to happen, embarrassed beyond belief I told Hageenti that I was sorry to end so abruptly with the meditation, if she said anything I could only sense what it was, she wasn’t offended at all and understood the situation, but even so I thought it was unpleasant in a sad and pathetic way, thanked her for everything one last time. I saw the instructions to close the meditation, draw in my mind the astrological symbol of the sun in purple so no other entities could come through the channels I opened. I didn’t understand how I knew this, didn’t care as something was going up in my esophagus. I opened my eyes and ask my friend if he had a plastic bag or a dumpster at hand, he just looked at me incredulously and asked if I felt bad, I just gag in response trying my best to keep the mouth shut. He took me to the balcony where the unseemly action took place, having finished I only focused on the palms of my hands, which despite being still vibrated to such a frequency that it felt cold but emanating heat from being in contact with the obsidian stone (told you it is anticlimatic but you dont listen).

SO, this is the summary of what happened, hope you enjoy it (took me three days to translate these ideas coherently). Since then I have only found one single material that describes this in a Rosicrucian book that makes a diagram of the Material sphere and mentions the others (The Secret Doctrine of The Rosicrucians see page 45), and the entrance of the Qliphoth described as a womb (which I don’t remember where I read it). See ya.

Construction, Destruction and Reconstruction are different steps of the same process, you start as whole being, then you are destroyed of the impurities, then reform anew as a different being but you are still yourself, and this I know as the process of Creation.

I had to research to remember that I read those words before, how weird to remember the meaning but not the name. Thanks for that.

Did the rest rings any bells? Anything that resembles the description of what I saw? I don’t know what or where to search.

Plenty of it is familiar. You should do an image search for “cosmology”. 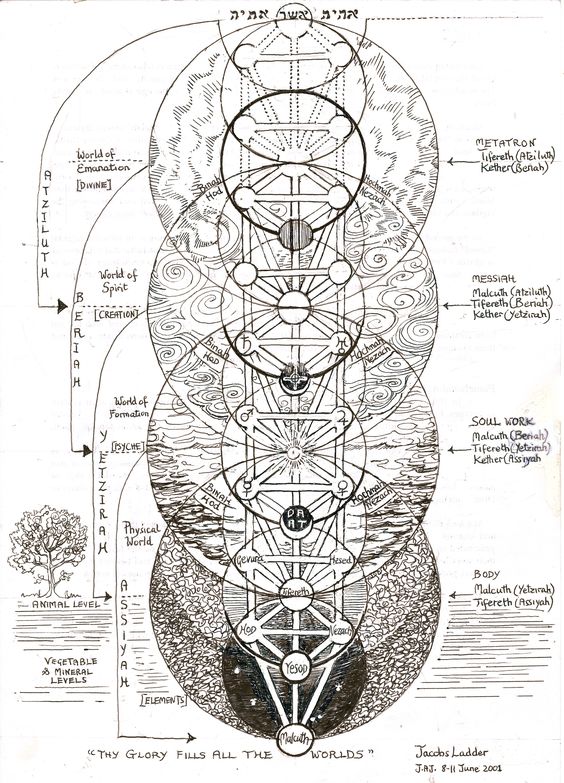 This may come as of late, but I think is worth sharing it.

The picture you show reminds me at first of something else I study from a manga (Berserk) and how its cosmology is set up. 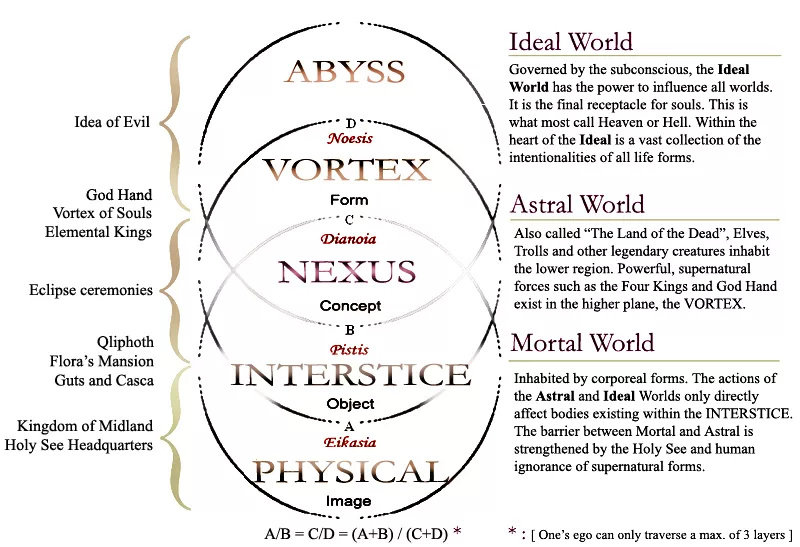 Even the core chain structure of the Kabbalah is reminiscent of another concept depicted on the same manga, the “idea of evil” or a thought form god and how it manisfested from the Abyss to the Physical layer, when normally only adjoining layers can be traversed. 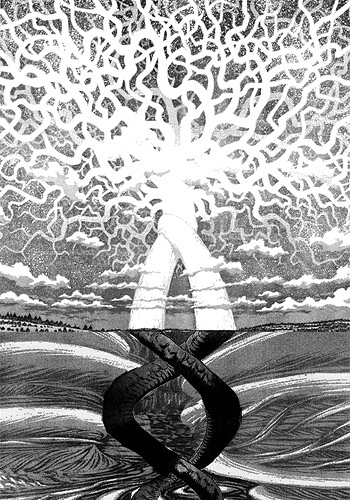 I did search images for “cosmology”, lots of things to dig in, but the one that got my attention was this one of The Matrix 12 domain universe

image.jpg277×569 32.7 KB
and its uncanny similarity with this picture from my first book of alchemy which I quote. 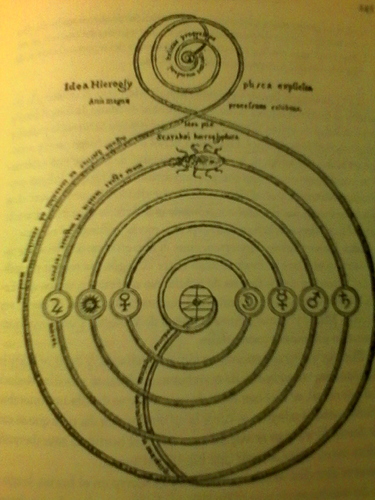 The alchemical process as a septenary vortex. The Beetle means the raw material of the seven metals, which can take any shape and diverse colors (golden, green, red, white, black, cerulean) as it undergoes the alchemical treatment. Its tail ends in the egg, from which it is born and to which the spiral of the seven metals and planets returns. Of Oedipus aegyptiacus of Athanasius Kircher, 1653.
Elémire Zolla, An Introduction to Alchemy: the wonders of nature, page 245.

(Oedipus aegyptiacus is on latin, and if you dont know how to read it then we are on the same page, but its content is good and might be of use to you).

I wanted to reply this to you because I see the synchronicity that all this has with your writings in The Book of Levi, and maybe we can exchange notes on the topics that interest us sometime.

Yea. It is very common to find the septenary when you are looking for information about the planets, usually you find it as a seven-pointed star with a planet at each end.

But when it comes to knowing what sequence they are in, the most likely is the following order; Moon, Mercury, Venus, Sun, Mars, Jupiter, Saturn. You find this, for example, in John Dee’s philosophical egg, among other similar ones.

It is the process of internal change that happens when passing through each planet, or the steps to be followed according to its characteristics, although it is true that there are other works where they change the order in which one must travel these aspects.

Pretty sure that’s Oedipus of Egypt or Egyptian Oedipus. In this case, though, it is the title of the referenced work.

Edit: I’m pretty sure you can find translated versions online.

I’m pretty sure that guy’s a magician.