Asceticism that got me into astral body (w astro reading)

(Maybe belongs in Journals? But I have no intention of adding more posts to it)

Some things I’ve done over the years that unknowingly at the time served to break me from my physical body and external human control so I can be under divine control and live primarily through my astral body:

(Not in chronological order)

Some consequences: my hair got so greasy I eventually couldn’t brush it anymore, and it was hip-length, so it started growing into one big dreadlock. I had to get it cut short, but I’d been wanting to do that for a few years anyway.

The lack of sunlight and exercise caused health problems which I self-diagnosed and corrected with supplements and a strict exercise routine that I treat like brushing my teeth. I also was inspired to eat for nutrition instead of taste after that and now eat a strict anti-inflammatory diet.

I shower (body & hair) 3 times a week now but I still don’t shave or use deodorant and I have no intention of doing so. I use different products now and far fewer of them, because I don’t feel like I need them and I’m so physically sensitive now that I’m very limited in what I can tolerate. I also have an environmental concern.

My spiritual marriage is ultimately a kind of self-marriage and I found that my body odor is a feedback loop that helps keep that intact. It’s like when you snuggle up next to somebody in bed. It’s a sign that I’m alive, I’m real, I’m not a robot living to please other people. I think if anybody has a problem with it, it means they’re too close to me. But I don’t leave the house anymore except to exercise anyway.

After I wrote this I thought about how I was drawn to Shiva in college, which was years before all this stuff happened. 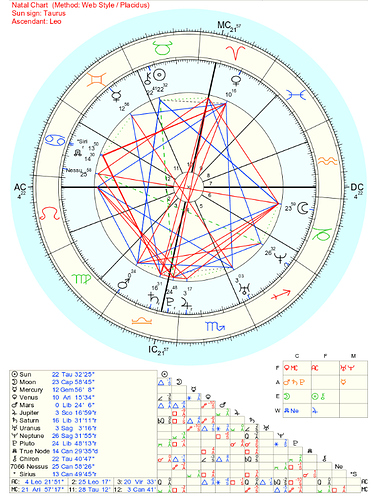 Stuff that stands out to me in my chart relative to all this:

Saturn-Pluto-Jupiter conjunction…I end up benefiting from the extreme asceticism. It gets me closer (Jupiter’s in Scorpio) to Satan (this conjunction is all about a relationship because so much of it is taking place in Libra).

I have to drop my physical body to get rid of my physical family (6th house in Cap, moon & SN there), which is the biggest parasite in my life (that monster conjunction on my IC squaring my moon and, to a lesser extent, my NN). The resources have to be transferred over to my astral body (spiritual family), indicated by my 12th house NN in Cancer. I talk a lot about my Sirian space family (which is Isis/Osiris/Horus, all within me—natal retrograde Neptune) and Sirius is conjunct my NN. I also have Nessus in Cancer in my 12th house and to me this is an Isis-Osiris thing, because their relationship is incestuous on the face of it (of course, there’s more to it holographically).

This is a bit unrelated to the rest of my post, but I just read on the Wikipedia page for Osiris that he was the “Lord of Silence” and that reminds me of my 3rd house Saturn in a very literal, pedestrian sense. It’s in Libra, so I’m silent via my relationship with him as Isis. “Bare bones communication.” (I don’t do small talk.) A kind of verbal asceticism.

(I forgot to mention it above, but I don’t drink, smoke, or use drugs. I don’t take prescriptions either.)

I know I said I wouldn’t add more but that “Lord of Silence” Osiris thing just reminded me of how I can’t be around noise anymore. I need library-level quiet. All I want to overhear are birds, rain, thunder, wind blowing leaves around, and maybe somebody’s windchimes. (When I’m watching videos or listening to music it’s different because I have total control over it and it’s through earbuds, not out loud.)

If I go to the park and there’s people playing music, I have to leave. I ran my brother off from living here because his music was too loud. I had to fight my mom for years to get her to not walk around the house with a speaker blasting music or podcasts. I’m constantly telling my parents to turn TVs down. When I dry my hair I have to wear earplugs.

3rd house Saturn and Mars…I injured my hand being angry at my physical family a few years ago and now 3 of my fingers don’t bend. I don’t use doctors anymore, and would never let somebody near me to do surgery, so I’m just stuck with them like that unless some kind of radical healing miracle happens. This helped me drop out of my physical body because I’m blocked from doing a lot of manual work like lifting and cleaning now. I mean, I can still do stuff for myself (with changes in tools and the way I move), but before, I was doing stuff like unloading furniture off trucks at a retail job and cleaning up after 20+ women at a women’s center I lived at. I went to design school where I made stuff with my hands.

That’s pretty intense, and very cool how you mapped it out against your astrological chart. Thanks for sharing this, food for thought.

I can really relate to this, but the astral experiences were more of a result than my main intention. I went into the ascetic lifestyle to try to heal from chronic depression and it completely ended up changing my personality.

I also had a very bland diet and drank nothing but water for several years, and stopped using deodorant, soaps, anything scented went. I stopped pretty much any effort in my appearance and got cruel comments from the opposite gender a lot too. I didn’t date anyone either. People were very different with me and I was again so surprised how people can behave towards someone different from them.

I also became very sensitive to the environment too and developed chronic hives as a result which needed medical help. Now I can hear the slightest sounds and movements which has been useful to detect issues with the car and plumbing at home. The metaphysical experiences were illusions, lots of shadow movements and feelings of goosebumps on my arms. I knew I was never alone in my solitude. The lights flickering in the corner of my eyes, and extreme sensitivity to energies from other people. Also meditation was absolutely blissful sometimes, I would cry from gratitude to sense the freedom and love I’d recieve.

I was motivated by Eastern philosophy in my case.

How do you live now?