I always wanted to learn how to draw in Photoshop. However, I just bought a course that teaches drawing in this program. So I start my little steps into the big world of Photoshop

I have not heard of Keita, but I will definitely watch it.

Oh wow thats awesome! I know PS can be very intimidating to newcomers. At least your not like me and just jump right into to it. Do not recommend.

It took me two years to just figure out the basics through tutorials on youtube. Im still learning even now…

Heres a link to krita as well.

But I think I’ll buy it a little later, when I finish my digital painting course.

Yea, thats perfectly fine. Its a very expensive item, so I dont blame you for waiting. Theres even slightly cheaper options for tablets that, instead of looking at the tablet to draw, you look at your computer monitor instead. Here’s one I dont own this one personally, so I’m not sure how well it would work, but its nice and compact. Again just giving suggestions. I love helping people with art.

Oh god that horrible thing. It was a 15 min sketch and terribly messy and unfinished. Heres something i was working on recently thats a little more up to my style. Im still not completely satisfied with it but I would like to finish it…someday. I love dragons though. They’re the whole reason I drew in my younger years! Someday I might finish that sketch…

Ok I promise not to take up anymore of your personal journal. This is your space not mine. Take care fellow artist!!!

Your drawing is amazing! If you have a place (a group in social networks or an account on art sites) where you publish your drawings, I would love to see them! Only, of course, if it is convenient and possible for you to provide this information.

I have been advised for a long time to do photoshop. But I kept putting aside his study. Now the hour has come

I love helping people with art.

Thank you very much for your help! By the way, I looked at this tablets. They have a good rating and are sold in Russia.

Thank you! Your art is wonderful and I sincerely wish you good luck and inspiration in this field!

Note: Perhaps only the portraits of Astaroth carry a strong and specific emotional component for me personally. I called this portrait that, not because Astaroth appeared before me with the head of a donkey and an overturned book in his hands.

It got its name due to the fact that I very often see Astaroth writing in some book. This image is always the same: a small room with a fireplace (most likely a tower room), a narrow window through which you can see the wasteland for miles, a carpet hiding rough and gray stone slabs of the floor, and a wooden worktable made of dark wood, on which are various papers and books.

Once I tried to consider what exactly he was writing, but I did not understand anything. The letters were incomprehensible to me (although if I really, really try, I can try to draw them). As far as I understood, this is something like a diary of notes, but perhaps I did not quite understand correctly Astaroth.

But, I repeat, this book very much attracts Astaroth’s attention, and in principle he gives the impression of a very busy, serious and somewhat closed spirit. 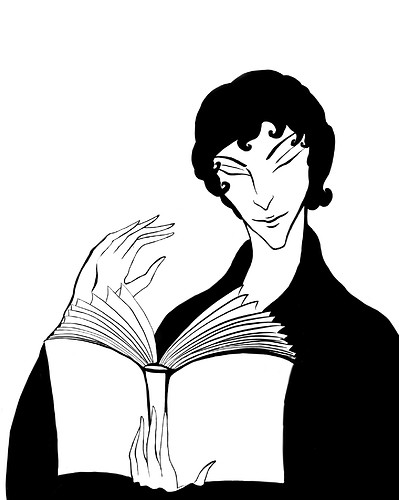 A full-face drawing of another version of the image of Astaroth. I asked him to show again, the image in which he could appear in the cultures of various communities, and this is result: 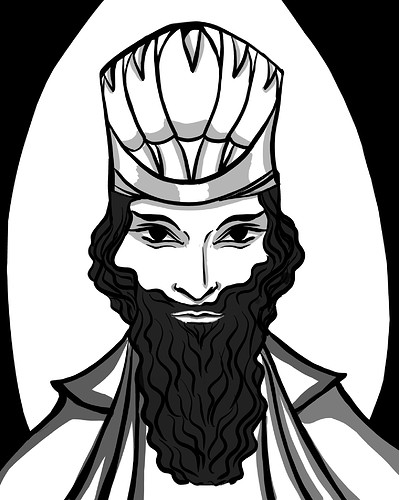 From the first picture in profile, I noticed a similarity with a certain type of Middle Eastern ruler. Googling a little, I noticed a very close resemblance to the images of the ancient Persian rulers.

This prompted me to think that Astaroth may be associated with the Indo-Iranian pantheon of deities or spirits, maybe with Zoroastrianism, namely with the spirits of darkness Angra Manyu. Perhaps he is associated with the most ancient Persian mythological system before the establishment of Zoroastrianism (this is rather curious, since I also associate Attakeria with Indo-European culture

To be honest, the result is unusual for me, since I “staked” on Semitic mythology. But I will continue to study this issue and try to learn as much as possible about it.

This is the most unexpected spirit I could paint

Didn’t plan to work or call him. However, yesterday and today I felt a light sexual energy, which, in principle, is not very typical for me (in particular when dealing with spirits). Even when I communicated with Asmodeus, I did not feel any sexual energy, rather a feeling of respect.

Here the situation was different. But, while communicating with Sitri, I said that I do not need anything except that I want to draw his portrait. The feeling of sexuality disappeared and I saw myself in a spacious hall. I especially remember the shiny marble floor. Sitri was reclining on a couch that was somewhat reminiscent of ancient Roman.

At first I tried to peer into his face. Sitri, observing my attempts, noted that: “Don’t strain. Relax. The harder you try to see me, the worse results you get. Let me show myself in your thoughts”.

As a result, I saw a young man from twenty to thirty years old. Especially memorable were the eyes (in color - a mixture of blue and red), ruddy cheeks and full lips. In general, he gave the impression of a “full-blooded” and “blooming” (in terms of a healthy appearance) spirit. 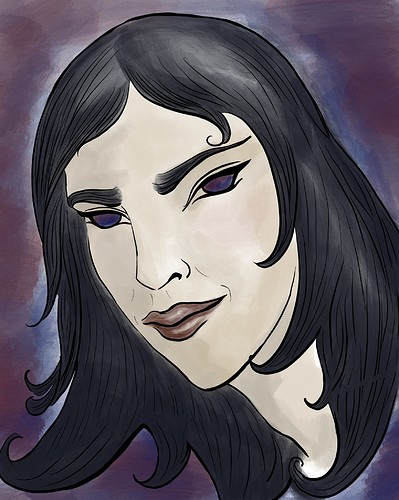 Today turned out to be a very productive day and I began the gradual implementation of the creation of images of Astarte and Astar (I already have enough images of Astaroth). So, since Astaroth, according to him, knows Astarte, I asked him to introduce me to her. Today, in the afternoon, I managed to see Astarta.

I found myself in a well-lit throne room. It may have been made of sandstone, but its color was yellow and light yellow. Astarte stood on a small platform, in long robes. She looked like a woman of 35-40 years old. I noted small wrinkles around the eyes and their color is gray-green. In general, I felt her energy as the energy of a serious and knowledgeable “matron”. Why did I use the word “matron”? I do not know. But it itself came to my mind when I tried to feel the energy of Astarte.

But in fact, her energy is multifaceted and complex and, apparently, it depends only on her who and what aspect she decides to show. In general, I would characterize this energy as “multi-faceted femininity”.

Well, this is my first experience of communication with Astarta. Not bad, but I think I’ll have to try to repeat it.

It also remains to try to contact Astar. I do not know if he is a “mask” of Lucifer or an independent deity. But I will try to describe as accurately as possible the sensations of his energy and draw his portrait. In the image of Astarte, I left part of the portrait unpainted. It seems to me that this contributes to semantic transfer of her image. 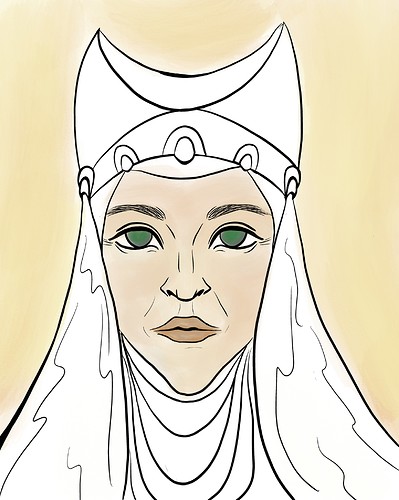 I studied the world of King Paimon with interest, however, in the light of the recent events that happened in my life, I will leave his wonderful world for a while. I know that I have a number of unfinished paintings of spirits associated with King Paymon, but they will wait in the wings and will be published.

And now I will turn my attention to the world of Astaroth and its inhabitants.

First, I saw a huge purple moth. But I asked him to take on a human form and a tall, thin man appeared to me. His skin had a slight purple hue, but the most interesting thing was the structure of his eyes, which still seemed to retain the shape of an insect. 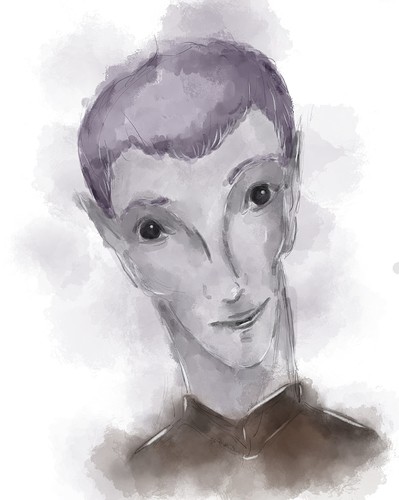 While drawing Nebiros, I was faced with the fact that his energy was significantly opposite to that of Sargatanas. She created a feeling of massiveness, strength and some kind of weight.

For some reason, in his image, I remember most of all the light red eyes, cheekbones and short ears. 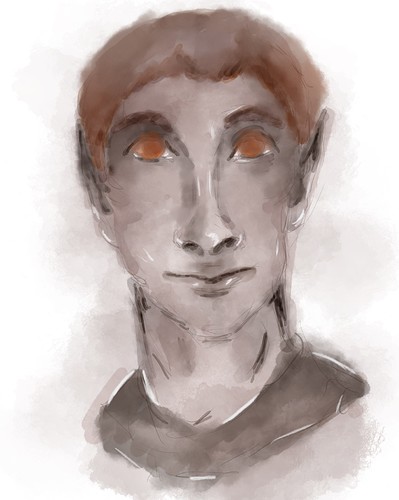 One of the ten generals of Astaroth: Mandras

Perhaps Astaroth has more than ten generals, but he showed me ten spirits, the portraits of which I will publish gradually.

Presumably his name is Mandras and at the beginning I felt a very energetic, even furious energy. But that feeling quickly faded, giving way to feelings of restraint and dignity. 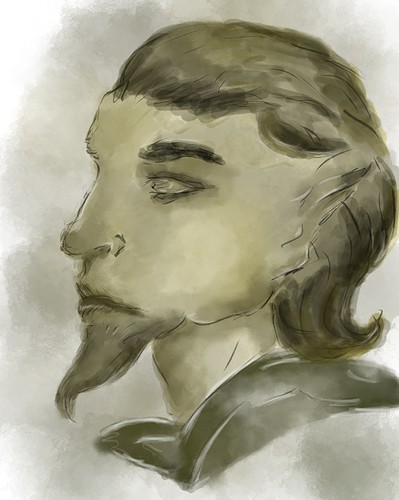 I note that this general is associated with feelings of cunning, caution and, possibly, secrecy. Most likely, Tuvis is an experienced strategist and tactician who would rather wait for a convenient moment than go into an open confrontation. 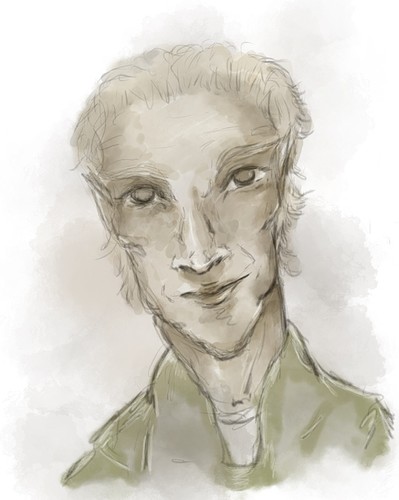 Interesting sensations are also associated with this general. First of all, its second name (purple fire) and an infernal form carry more “underground” energy. It seems that Helramnis has some kind of special position or function among the other generals. 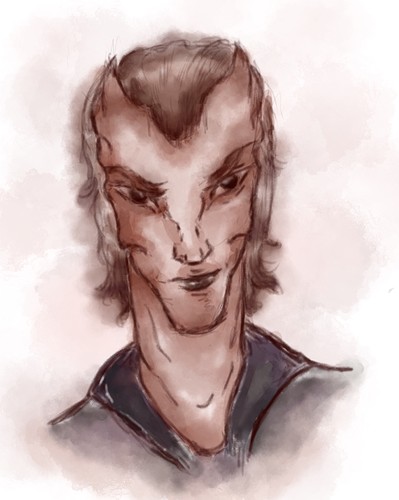 Today I had an interesting and instructive conversation with Bune. I will describe it a little later in another topic, but here I will only note that I was especially struck by Bune’s eyes, which resembled black velvet. 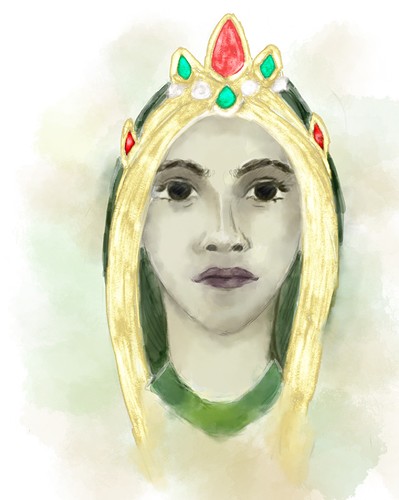 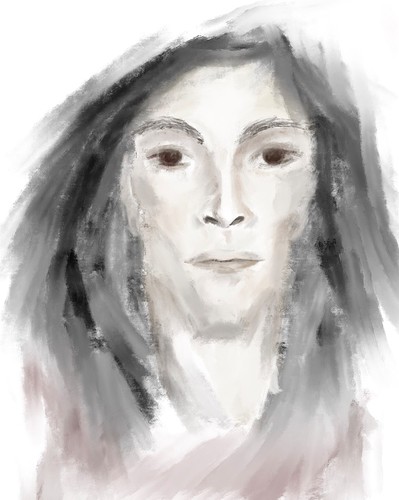