Anyone have experience with the Angel Azrael?

I’m not looking to evoke him or anything. I just need advice on a particular incident.

I was having a conversation with a fellow wiccan about our experiences with angels and demons. She mentioned that she tried to invoke her guardian angel and all it did was make Azrael(or someone she identified as Azrael) chase her around in her dreams and scare the fuck out of her. She also said she did this in spite of her goddess warning her against contacting angels. My advice to her was to evoke Azrael specifically and ask him what his issue is. He’s likely not a legit threat but is giving a test or warning. Here’s the result of that.

[I fell asleep last night and called upon the elements, as well as Hecate and Lucifer for protection. A BIG circle of light enveloped around my body and I called upon Azrael to talk.

He was PISSED. At first I was afraid that he would’ve broken the shield, but then I remembered about the protection of Hecate and Lucifer, so I rose up from my position and pointed to him.

“Azrael, this has to stop!” A demonic voice filled my ears. “You know not what you seek, fool!” I saw that he was banging his glowing white fists against the shield. Loud “BOOM” noises were echoing in the darkness. He was so desperate…

I spoke. “Azrael, I just want to talk.” Azrael’s voice shouted. “You said that you were open to ANY angel! ANY angel at all! Do you know how DANGEROUS that is?!”

I bit my lip, remembering the Goddess’ warning. “Yes, I know. And I am sorry. But I just needed to know my guardian angel. That’s all I wanted to hear.” Azrael started clawing the shield. “You are a fool.” His hand shattered the shield, and I remember a female voice (I assume Hecate) calling out to me, but I forgot what she said. That’s all I can remember before I woke up]

Does this sound like him at all? An imposter? Her own psyche battling christian indoctrination? I thought angels are generally cool with everyone.

He is a fallen angel entity. He is both angel and demon.
If you approach him with fear and preconceptions, he will be very pissed off.

@anon48532061
No! Azrael is the Angel of Death.
The Yazidi pray to him.
Azrael=Osrail of Bardon’s second book.

Why people just assume that everyone has a Guardian angel? Your Guardian can be any kind of Spirit…

Welp, that’s Angels for you.

She also said she did this in spite of her goddess warning her against contacting angels.

sigh Ye, tell your friend to keep her ears open next time her goddess will warn her against something, instead of ignoring her twice.

Truth to be told, to me, Hermes never identified himself as Anubis (but he did verified he’s Thoth) and neither Anubis identified himself as Hermes… In huge disappointment for all the Greeks out there who like to mix match all Egyptian Gods with the Greek ones… But ofc each person has his own experiences, I’ve seen many “stereotype” mixes that are totally wrong.

@anon48532061
I do not agree.
Hermes is egyptian Thoth, not Anubis.
Work practically and you will learn the difference.

I’ve worked with Azrael before and I’ve never experienced this. I know he’ll only do these sorts of things if he’s provoked; though there are some spirits that don’t get along with others for various reasons just like how humans don’t always get along.

While spirits can enter people’s dreams, that doesn’t mean that they always show up. For instance, I could have a dream about Azazel, but that doesn’t mean he’s actually there. Dreams are very unpredictable and won’t always have clear meanings.

But let’s operate under the assumption that he did show up.

It sounds to me that your friend broke her promise and that upset Azrael (or the goddess was disguised as him but was still upset). The sentence “do you have any idea how dangerous that is” to me implies that incurring her goddess’ wrath is dangerous.

I’d have your friend evoke/invoke him again but this time awake. Ask for his sigil when he arrives. Spirits are unable to lie about that. If he refuses or provides a sigil that isn’t related to him, then it’s not Azrael.

When you say sigils do you mean these? 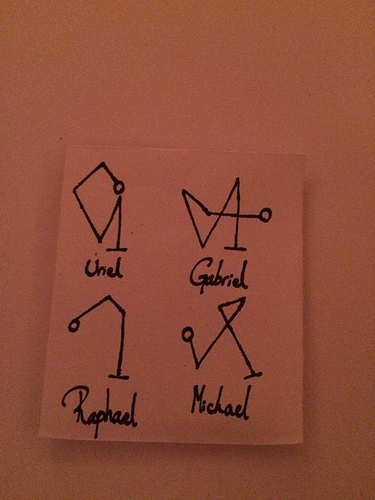 Or the more Solomon/Enochian looking shits. 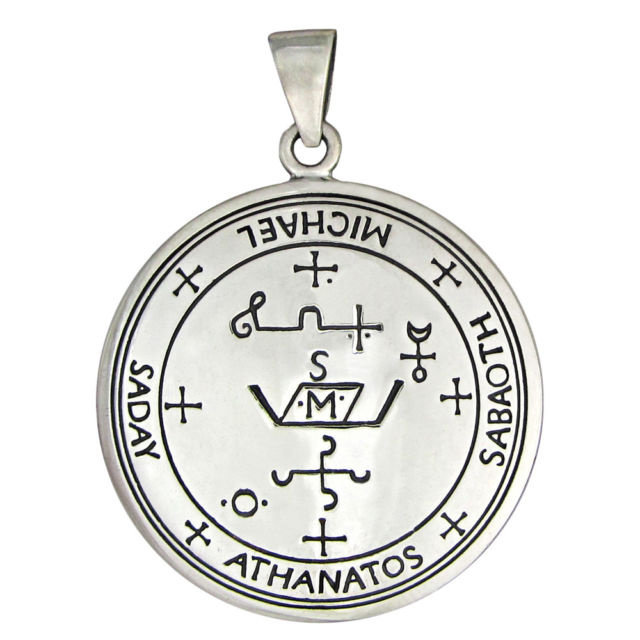 I have to disagree… Just because they share traits doesn’t make them the same Entity. If that was the case, then all Earth Goddesses would be one Entity, all Death Goddess would also be one Entity etc. Same is with Psychopomps, not all of them are the same Entity. For example, Hecate is also a psychopomp but she’s not Anubis or Hermes.

That reminds me of another question sense we sort of went off topic. Do you think Naberius and Cerberus are the exact same entity? I’ve wanted to work with him but I also work with Hecate, and apparently she refuses to get along with anything related to Hades? The accounts are a bit confusing. @Anassa

she refuses to get along with anything related to Hades

Hmmm… That’s new to me, I know she’s perfectly fine with both Hades the God and Hades as the Underworld in general. There is a high chance she tries to keep you away because you’re not ready for this.

Do you think Naberius and Cerberus are the exact same entity?

What’s with people and Cerberus lately?

Naberius could be an aspect of Cerberus, but you have better chances asking one of the two beings themselves. I know people identify them as the same, but I don’t trust what people say on these matters. Humans don’t and can’t know everything.

Well. They are different “tastes” of the same thing, which is a whole flow of energy. Entities are, like us, drops on it. They can have different combination of “tastes”/aromas, but they are, in essence, the same profile of entity, that must be approached on a respectful way.

Anyway, everyone is free to believe whatever the want based on their own subjective experiences, and results. I get VERY GOOD results with my approach, so, to me, it is my Truth.

No they’re not. I’ve been in the presence of both and they’re very different.

It is like saying that Hermes and Anubis are not the same entity.

The Greeks forced that association on Anubis. It doesn’t mean they’re right.

Then, you should learn egyptology.
Anyway, I will shut up. It looks like the more you know, the less you can speak without people being able to open their own minds to something that is not a science.

Don’t take things so personal, I speak as a fellow magician who worked with Anubis for several years and I also studied Egyptology. I believed the same thing for years, and never thought to ask Anubis because back then it wasn’t importand if he is Hermes or not. I just accepted the associations people wrote in their old books. And I’m a Greek, some people here go as far as to say that Egyptians borrowed some of our Gods and not the other way around. So for me all these were Facts with capital F, no questions about it.

But once I learned how to properly communicate with Gods and even though I never cared (still I don’t) who’s who in other pantheons, I had Hermes and Anubis themselves declining the association.

I’m not telling you all these to change your personal Truth, I’m simply saying that humans from ancient times, liked to mix the Gods. Some are right but some are not.

And for that, and since I’m not going to bother asking every single God I evoke who he is in a different pantheon (I have better things to do lol), I just work with each one of them separately as the different kind of consciousness they are.

I don’t take it personally. It just frustrates me that anyone seems to have thought about the different Entities as Dynamic beings, with their own process of evolution.
Thinking about them as Static beings seems sad and actually breaks some “common magic sense rules”, like the one when one makes a pact with an entity because it is both nourishing for the Entity and for the magician.
This theory of mine would justify why some deities have changed into different roles throughout the whole History. Yes, obviously political events had something to do, but obviously all of that priests and people who worked with that Deities on a daily basis also did notice a subtle ans proggressive change within the entity energies. That is why, for example, Osiris ended up being the Ruler of the Underworld, whereas it was Anubis the Ruler before that period of time.
Having that concept of Dynamism in mind, there is also the concept of time within the spiritual/astral realm. Time there may (and may not) be lineal and direct. Past can be future, and future can be present.
We very seem to assume in here that we all have contacted a specific Entity within the same spot/time/moment of evolution.
Maybe you contacted an Anubis and a Hermes that, in that point of their evolution, were not identified themselves as the other, whereas in other point of their past/future, they were related.

That also applies to the infamous Christian God of the Old and New Testament. The old one appears to be “evil” and strict, whereas the pne of the New Testament is gentler, sweet and friendly.
Both are the same Entity, with different points of evolution within a different period of time (time as seen within the spriritual realm).
That would explain why all of us could get in touch with both of them, even if they appear as a different Entity, completely polarised.

Then, if you add your previous human theorical knowledge and your experiences and own biases, your approach to an Entity will tend to go to a specific point of their Evolution.
So, with this being said, there would be an infinite amount of “Anubises” with different “tastes”, due to a whole proccess of evolution. But all of them are the same Entity.

Saying that the Hermes you contacted is the same Hermes I have contacted would be the same as saying that you having met me (from another paralel multiverse), and that both are the same person. We would be, in essence, but that one could have complete different traits comparing to me.

IT TOOK ME SEVERAL HOURS TO REALIZE I READ YOUR RESPONSE WRONG. I AM SO SORRY.

I’d go with the ones in the above picture.